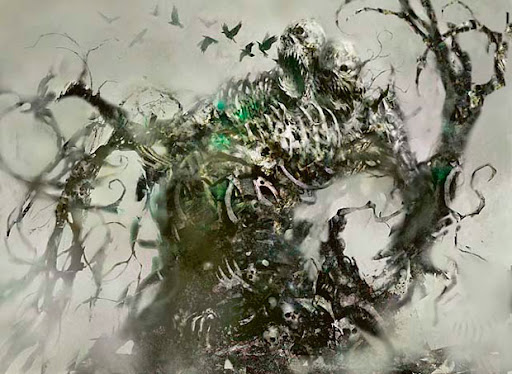 So how come undeads get made uncle?

Well Pipster, a spiritual body is made of four elemental spiritual components which may do various things on death. Depending on elemental souls parts and funeral practices used different forms of undead may be made. Dont listen to the priests. Elemental necromancy got it all right aeons ago Pip.One fuses soul elements in various combinations to make undead.

Most cults today only acknowledge one type of spirit in a body. But the cant acount how a souls might be in heaven while their body is a mad wight or another part is a phantom. Old elemental heretics dont have all the answers but still better answers than most.

Earth spirit is bound to the body and gradually over time returns to the earth. It may produce a earth bound spirit to occupy the body or to create a new body from the spirits will. The base matter of the undead is strong but dumb. If worshiped and sacrificed too the spirit might become a minor faerie being or minor divinity. Likewise a restfulness soul might make a monster form or appear as undead or a goblin. Hauntings might include animated solid objects or manifestations of creatures.

Air spirits are bound to breathe and can be invisible spirits of the air that ride on wind or may occupy a corpse by reanimating or possessing it through the mouth and nose. Air spirits are agile and intelligent but not very strong. These spirits might inhabit a body but do not cling to things or places rather they fly away. Normally the animating breathe rises into the sky on the last breath and travels far away. A wizard may catch one and breathe it into a corpse to reanimate it. They may respond to calls from the spirit world or lonely clouds above. Hauntings may include voices, drafts, static and storms.

Water spirits contain the life force and are associated with fluids like blood. Such spirits may haunt a place or person with blood stains or ectoplasm. Water spirits are very empathic and charismatic. Such spirits reside in moisture in living or dead tissues or plants. They may remain dormant and asleep withing a body till it is desiccated and dried. Fluid may re-hydrate a long dried corpse. They may infect a person through the blood like a illness and influence or possess them, Hauntings may include fluids, wet noises, mist, slime, strong emotions, chills, ice.

Fire spirits are the spark of life animus and thy dissipate the fastest. Fire can be drawn from living or snuffed killing them. A body may be jolted to life with a life spark but they may require more jolts over timeo or consume a body. They may form lights or glows in the dark. Cremation sends them to then next world fastest but the ashes can be used to recall them. Hauntings may include lights, glowing apparitions, fire, lanterns, heat, lanterns going out,

What about things that overlap or don't fit in the schemata? Didn't elemental necromancy get wiped out? Ow!

Well pip they did get everyone to unite against the monster gods and they made death betray monster kind. So they deserved to rule for thousands of years, just like you deserved that slap.

More than one elemental component can unite or one might dominate the other but as different components might weaken over time so well preserved corpses can do it better. Air and water make more complex weather and icy storms. Fire and earth might make a burning body. Earth and water create a mud man. Fire and air might make lightning, or water and fire steam.

Elementalists split from necromancy when the neutral elemental lords ascended over the evil ones who were squandered in the wars of man and monster. Also planar shifts made negative elementals harder to call. Diabolism, Alchemy and Demonology grew more common and prevented Elemental cults from ruling the next millennium. They all were bad but didn't want all life gone like extreme necromancers. People thought Necromancers wanted everything dead forever as slaves and even evil elementals didn't want that. So the Necromancers rule ended and other schools were spawned and our current age of freedom began. Black hidden schools remain and some seek to restore the age when man served death. Most secret evil secret schools into demonology or diabolism now.

So bodies with unfinished business, tormented lives, or preserving their own remains may have spiritual remnants defending remains through haunting phenomena or manifesting some kind of undeath. A body worshiped like a shrine with offerings like ancestors may grow into a petty cult and the spirit may become a permanent feature like a land or river spirit. Some may manifest a body like a goblin or gnome or elf. A ancient kings burial mound may become a elven hill court with a thousand years of offerings.

Now pip do you want to receive ultimate knowledge of the other side?

Now go down to the gallows and bring me today's corpses. Don't forget to bribe the guards this time!

What about golems Uncle?

They were never alive but draw spirits from other planes depending how the creation formula works. One elemental animating force is fine, depending on the material often. You can get it wrong and the golem goes crazy.

Why cant you make a golem to do the chores uncle?

I have got you for chores and if I made a golem she would have better tasks than cleaning up after you boy, keep out of my lab!
Posted by Konsumterra at Tuesday, February 09, 2016