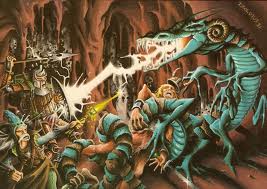 Gaming on club night decided to work on table for shore leave for pirate game at club. Part 2 of towers almost done. Real possibility of characters returning from this module ready for domains.

The Lost Caverns of Tsojcanth


Starring:
Bloodknock the blood druid, ever plotting the ascendance of nature
Humblezorg the modronic sorcerer, treading fine line between indifference and uncaring
Linden the bard who is returning to his highland roots as their ambassador
Emy the wizard from the tower of birds, necromancer and air elementalist bird mage

So the heroes found the hidden gnome valley and got a good reaction from the king at a feast. Some party members tried impressing 3 foot gnome maids and failed. Humblezorg introduced gnomes to black lotus resin and charged them exorbitantly. Bloodknock asked about other mountain monsters and the king mentioned giants, hipogriffs, wyverns and a blue dragon.

Next day party marched to dragonlair and avoided another landslide but lost new pony. As clibed 45 degree slope blue dragon was gliding from the sunward slope and trying to ambush. Party lightningbolted, fireballed then hid in a fog cloud. Dragon blew back fog down hill with powerful wings blasting clarrissa and bloodknock. He resisted hurt but Carrissa's heart stopped. Party pummeled with spells and crossbow bolts and dragons breath became weaker and weaker till party downed him. Bears tore dragon apart and Bloodknock used his master butchery skills while Clarissa was healed. Party found a good horde in cave including a scroll and went back to gnomes.

Gnomes impressed and made a new feast. Gnome more amorous and all but Humblezorg spent night with a gnome. In morning Bloodnock at gnome maids dads recommendation got married. He only hates humans so worked out fine. Emy swapped some spells with  a illusionist wizard gnome. King offered them availability of raise dead magic if party need. Party all 8th level now.

Next day party found the dungeon secret pass with druid magic. Entered and found chamber of magic mouthed heads by doors. Began exploring and had some awesome battles with impressive loot. A lurker above dropped on them and Emy managed to hit it with richochet lightning almost killing it. BaBa and linden burst out with daggers pleased to find gems inside. Another pile of coins and gems found. Found fungi garden and trolls attacked but druidic magic froze several and party went to town on them in a 14 round battle. Linden tried to put poison cloak on several while paralyzed. More loot. Greenslime and more loot. Found bat filled tunnels and subtereanean lake. Bloodkock turned into a river dolphin and explored till a 4 ton snapping turtle chased him ashore. Switching back to human he flamestruck it (short rule fued over damage) and other destroyed it with spellfire. Left a rope to cross and explored till found smell of chicken shit and broken statues. Joked about dungeon chickens till BaBa (guest player) mentioned cocatrice. Not funny now go back. Found corridoor of holes with giant eels waiting. Bloodknock explored ahead as bat and found formarians lounging around in loot. Emy on hearing of loot ahead ferried party over with wings and floating disc. Formarians managed to get in melee but slowed by trip and entagle effects. BarBa hit twice and bear hurt but monsters down.

Among loot, a second poison cloak, boot of dancing, elf boots and boots of levitation and loads of cash.