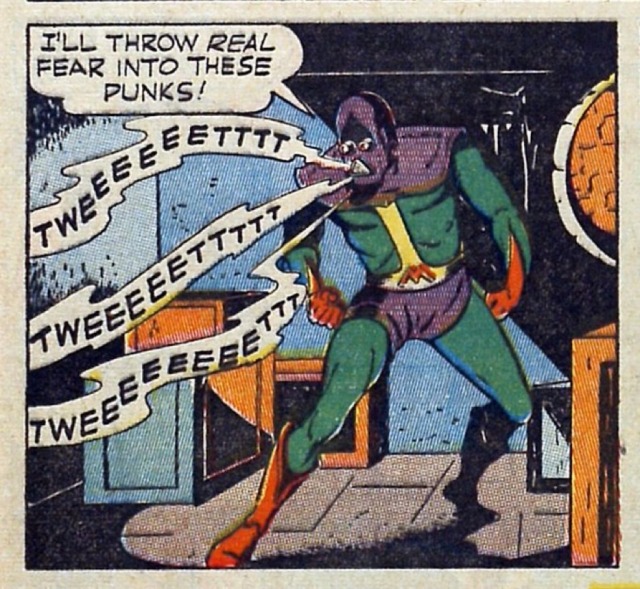 Have been reading and learning about public domain heroes of early comics and pulps and wanting to run some superhero games in the future. My RIver CIty setting won't need much work just more low tech. Or at least like batman and superman cartoons have lots of things look retro but high tech still can fit in. Alan Moore's Forty Niners and some of his other homages to vintage characters have been an influence on postwar heroes. Ministry of Space comic also.
Themes Id likes to touch on:
Wartime heroes returned to wage war on crime and some overdoing it
Sidekicks are common but the public is turning on them
Governments that used heroes in wartime now want tighter reigns
Communism is a growing spectre and petty fascist dictators expect allegiance
Heroes will be able to influence the character of the city and the people
Aliens have invaded and are in secret creating a new 20th century

Basically will use TSR Marvel with a few mods including a Charisma stat for when your charismatic hero is on an alien planet and popularity is irrelevant. I did Just use popularity but it broke down with espionage stories or not being able to use your hero ID. We played more like the x-series modules set in a nastier alternate future all the time. Probably more like the Ultimates, Martial Law, Zenith, The New Statesmen than a mainstream marvel 616.

In most campaigns, I write new character gen systems.
So for my Golden Age Gilded Cage setting:

Background
Each Hero Needs the following background material:
What did you do in the war? (or were you too young to fight?)
-where were you when the war ended?
-what have you been doing since the war?
-If not in combat in the war have you killed?
What is the source of your abilities? (science or magic?)
When did you get your unusual abilities? (childhood? accident? experiment? study?)
How do you maintain you're your secret vs heroic identity?
What is your favourite fighting phrase?
What is your trademark tagline?
What do the press call you?

Considering your resources what property does your public identity have and what equiptment does your heroic identity use. Where do you live? Do you drive? If you want more than 6 gadgets get a utility belt option or a vehichle. Equiptment from options is superiorquality to what you could buy.

I have gone for instant karma on battlefield and give bonuses for witty dialogues and battle talk puns. Using your trademark phrases in a cool thing that can deserve instant karma. Cool old timey radio talk and retro culture referenceds get bonus spot karma too)

Tables are suggestions for ideas or roll if you are in a hurry or like the challenge of working with random number. Roll several times and combine the outcomes.

Names associated with your powers or some other theme should be considered in your public ID. If you have a secret ID you can work outside of super hero circles also. Obviously a cast of blist heroes for a city will be needed.

Occupations
Roll one of the sample ones below with recommended skills. Contacts generally only have two Talents. Lots of people have no talents. You could pick several and pick skills of either but choose the lower resources and popularity mods.

**Tribal Weapons are like oriental weapons but include the following but I usually set to four weapons from darts, bows, spears, knives, javelins, hatchets, clubs, blowpipe and machete)
Cowboy Weapons (dagger, revolver, lasso, rifle)
d100 Quick Contact
01-10 Military (former war buddy)
11-12 Media (radio or newspaper or TV)
13-15 Law Enforcement (police officers, prison staff, federal investigators)
16-18 Scholar (teacher, academic or occultist)
19-20 Inventor (scientist or tech expert)
21-25 Industry (business owner or manager)
26-30 Underworld (criminal informant)
31-40 Dependant (sick, infant or elderly person depends on your care each session +10 karma/session)
41-50 Youth (kid gang, orphanage, a plucky ward, copycat sidekick, teen fanclub)
51-60 Love Interest (lover who you must date at least once a session +10 karma/session)
61 Pet Mascot (sometimes useful unusual animal that uncannily follows you)
62-64 Mystic (expert on magic like a wizard or scholar)
65-67 Espionage (know a secret government agent)
78-82 Government (politician, lawyer, judge)
83-85 Servant (butler, secretary, manager, driver or bodyguard)
86-87 Inventor (working on a profound field of super science)
88-90 Technician (can make gadgets and fix things)
91-94 Veteran Hero (know a retired hero possibly a mentor who has useful advice and secrets)
95 Secret Society (have contact with a vast secret empire with otherworldly secret powers)
96-99 Enemy (enemy often appears and may interfere in your actions or could provide information or even aid you vs a mutual enemy. They might want to kill you and allow no other to do so)
100 Otherworldly (some ghost, alien, AI computer, minor deity, brain in a jar, unreliable and infrequent)

d100 Quick Background Options
01-05 Contacts Everywhere +4 contacts and new one's half karma cost
06-10 Rm weapon or armour can be stolen beyond normal technology
11-15 Ex power attached to the body, obvious and can be tampered with, beyond normal technology
16-20 Gd power with no obvious visibility if not in use or add to an attribute (Ty+Gd or Gd+Gd = EX or Gd+Ex=Rm)
21-35 Utility Belt carry 20 useful contemporary gadgets in your costume (or 10 if not normally available except to secret agents or inventors)
36-40 Incredible Vehichle beyond normal technology (possibly stealth, supersonic, spacecraft, amphibious, sentient)
41-47 Secret HQ  d4+2 Special rooms can buy more with karma
46-50 Costume provides Gd instant change and Gd protection vs kinetic and energy attacks. Self-repairing, stainproof, and mask can't be removed accidentally. You can develop feats such as claws, glider wings, shadow-blending, cling, disguise, air supply, filter mask, etc). Such suits have their own strange origins and secrets such as magic or living alien
51-58 Agent with official standing with government agency bonus Espionage and your agency as the bonus contact for professional skill. Have access to RM funds and additional agents if your superior agrees
59 Extraordinary science or magic beyond normal persons to obtain or understand
60-70 Veteran +1 Fighting & Strength and choose Military, Agent or Law Enforcer talent
71-75 Rich Rm resources +10 popularity
76-80 Famous +30 popularity +Gd resources
81-90 Exotic Training +2 talents and an extra contact, usually a special teacher or organisation
91-95 Kill Code don't lose karma for killing people according to their code. They may kill an enemy in combat or leave them dying and only lose 20 karma instead of losing all karma.  Their companions and allies may suffer karma losses so it's polite to only kill in secret when alone or with another killer. Villains with this lose 20 karma for executing one of their minions usually to exhort them to work harder or face a hero
96 Lost Civilisation know a secretive civilisation as a contact who adds +Gd to your resources and has unusual resources, creatures, transport and agents. Mystical monasteries, a wizards tower, aliens on the moon, a hollow earth empire, secret intelligent apes village in dinosaur valley, hidden Aztec people in a volcano, a Roman colony in a cavern or whatever
97 Patron Power of science or magic aids you with advice and can for 10 Karma heal 10 Health once a day or for 50 Karma will offer aid to avoid death or escape under mysterious circumstances. Your entity may comment on your progress and may offer terrible advice from an alien god. Lots of villains get help from demons or other villains
98 Serial Immortality, if killed a new body awakens. Androids, clones, hijacked and modified corpses or some other method is required to be restored to life
99 Lucky roll d10s for d100, declare dice order as please, double digits are a spectacular failure with side effects
100 Immortal will not age or die but does feel pain and takes time to heal and regenerate missing or damaged parts. Class 1000 sense other immortals in sight range

So the idea is you Min-max stuff like resources could get to national wealth levels. Or min-max stats and options to get in the superhuman range. I cap most humans at Excellent stats and nobody could be excellent at everything. Someone could stack some low-rank powers effects like defence or melee.

Background
What did you do in the war? Worked in Army Headquarters and lived in Agartha for several years fighting nazis as surviving expedition member from military inteligence-where were you when the war ended? Darwin doing office work and frustratedWhat have you been doing since the war? Fighting crime in hero ID started in warWhat is the source of your powers? sword ancient advanced technology and trainingWhen did you get your powers? met master in Nepal who trained her and gave her a swordIf not in the war have you killed? only an evil yeti and zombies, a few saboteurs died in escapes and in vehicles but were not killed by her personally or with her sword. SOme nazis got crushed in a rock fall. She has no problems killing armed combatants or saving people in action but will accept surrender
How do you maintain you're your secret vs heroic identity? Rich party girl adventures thrill seeker known as a bit dangerous with short hair and strange causes vs her grim vigilante ID. People know her as having been respectable in the war years
What is your favourite fighting phrase? "Let the light of Truth strike you down!"
What is your trademark line? "By the light of Agartha!"
Do you really have powers and how well known or obvious are they? Mostly its her sword and training to peak human ability and her adventures hunting nazis looking for Agartha in the war and helping in war office. Maybe her secret training could pu sh her behind human abilities
What do the press call you? Vixen of Veritas (she hates it for some reason wont print stuff about Agartha)

LIGHTNING LADY
Playgirl Patricia Parker a famous party lover and noted for her wealth and scandals has made the papers a few times. Many remember her years of work in the War Office in planning rooms and her tireless work with civic defence. Less known is he was a teen detective and a medling kid before that. She had a secret 2 years fighting Nazi agents in Nepal and Antarctictica for the Experimental Operations & Command. She adopted her super hero identity after being kept uselely in department planning offices who used her financial wizardry to damage enemies and choose millitary targets. Once she made papers helping a clean up from a bombing while her peers fled to Adelaide believing they faced an invasion. She spent some time in Europe after hunting art treasures and nazis leaving financial trails. She is keen to move into a new city and take out her frustrations on crime.

She will often cause catastrophic property damage to affect areas instead of hitting people. She will ram with a vehichle or do driveby sword strikes. As she reacts often quickly she can disarm an enemy and destroy a foes weapon or vehichle or bring a building down on people.
Posted by Konsumterra at Thursday, May 26, 2022