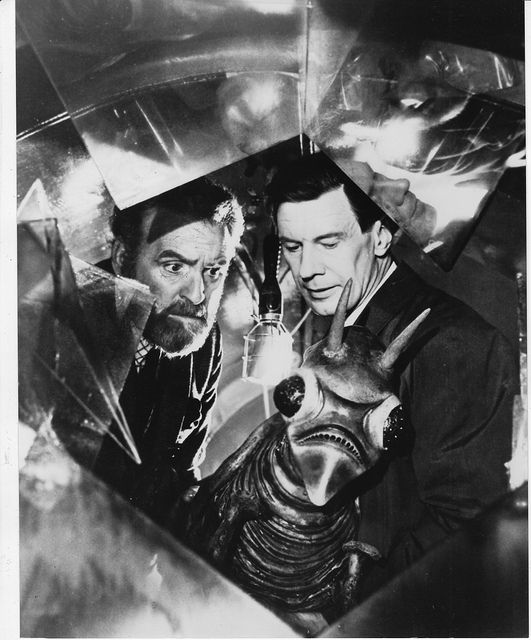 Quatermass would be a great RPG setting. Besides the original radio show, several movies and TV adaptions a RPG would work well. Has elements o HPL and Dr Who.

I would use CALL OF CTHULHU rules as I know them well and most of the concepts similar. Overlap well with DR Who too. The Daemons story in the Pertee era was pretty much a Dr Quatermass+70s satanism story. Doomwatch tv show would be good for ideas too as non intelligent science disaster threats are good for this setting too. Battling SF phenomena is a underused RPG genre. Action characters might have to find and chase witnesses or madmen or ppl who think they can profit or steal information from phenomena or rescue scientists. Lliogorr and other Cthulhu mythos things might work occasionally. Laundry files would be pretty compatible and might work for a setting. They might be related to Selinites.

I would like to see more ways of using Call of Cthulhu without Cthulhu. Plenty of genre settings have same basic investigation of myth, science, murder and uncovering cosmic truth.

I would use the 1967 film as start of my modern setting with HQ in a closed tube train line in Hobbs end with the martian ship and and alien remains in storage. In history given I927 there was a tunnel in area that had problems due to phenomena in area and and there was trouble when a well dug and charcoalers cut big trees here in 1763. There were troubles in 1341 with witches. Roman era problems are mentioned too and time travel could be possible even if only mental time travel aided by drugs and psionics and technology. I would add 1666 with plague and great fire being manifestations and any witch crazes. Reports of ghosts, strange things, ogres, witchcraft, goblins and ghosts and gargoyles are mentioned in historic records and even ancient rock art.

The Martian Colonisation of Earth1967 Earth was colonised by mars. When martians modified humans 5 000 000 years ago they gave them increased capacity for intelligence and martian psychic ability and DNA. Also the possibility to be linked into a hive mind for various purposes including to be mass taken over by martian minds. This link and the sum of human mentality and life force is what empowers most psionics and strange phenomena.

The martian seeds of mentality have been activating martian agents all across the world but especially in the UK or where other martian relics have been active.

d6 Martian Agent
1 Martian - possessed by an ancient martian, cold, inhuman and hostile with psychic powers
2-2 Agent - loyal martian slave agent fanatics still carrying latent seeds of the slaver gene, may have some superhuman powers
3-6 Peon - sensitives vulnerable to martian dreams, phenomena and suggestion. Confused and unreliable but may form mobs and hive minds and colony purges where they turn on those unaffected by martian DNA. Peons may exhibit poltergeist activity. visions, fear and hostility. In a large massmind event martians may appear and mob victims are telekineticly torn to shreds.

Five million years ago dying mars sent ships to earth. Living metal psionic ships where launched by power created from crating massmind swarm events where martians turned on deviants, mutants and free thinkers. The martians on earth too and modified humanoids and used colonies of hybrids. Returning to mars took generations of humanoids to sacrifice for a return to mars where humanoids could be modified further. The trip to earth was easier but martian hivemind powers could communicate the vast gulfs of space. As mars died their plan was to mass invade earth and take human bodies well adapted to earth. Things went wrong and Mars died. But their are remains of martial colonists and DNA on earth and possibly strange martian machines still functional after millions of years. The invasion failed but the mental virus in the collective consciousness of humanity or the human hive mind is tainted by martians.

Martians have many psychic powers and technology of living metal that can use mental power or amplify it. They have a collective consciousness known as the hivemind which is similar to the human massmind which interfaces with it.  The Martians used their hivemind for social control and as the planet died the used it to turn their population on each other to eliminate mutations and individuality, things that might have saved them. They turned the wild and unconscious forces fueled by fear and anger to purge their people of deviation. The energy for this was great enough to propel their colony and science ships to earth.

Martian visions are often of the hives especially during the violent rituals of purging when the hive mind would run wild. Other visions like location of martian agents or bases, historic martian phenomena with sensations of time travel, or of martians arriving on earth millions of years ago. Visions of martian spirits may become more real, advanced enough to manifest telekinesis, ectoplasmic manifestations, touch and own will and thoughts. Some might exist only in a victims mind or occupy a host. Some merely repetitive loops, psionic shadows of ancient doomed race.Martians could be added to all kinds of horror or SF settings as a race. 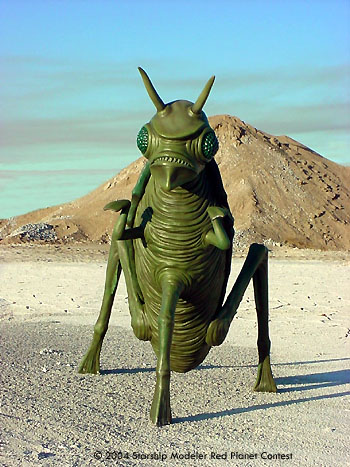 Quatermass FoundationHumans have not taken this lying down. Governments all maintain secret services which investigate strange phenomena even if it is just in case martians are involved. These organisations often employ genius polymath eccentrics who may offer assistance in other events involving outstanding science speculation.

In 1967 The UK Experimental Rocket Group led by Quatermass was absorbed into Defence against the wishes of Quatermass. Shortly after there was a investigation into a found martian ship which led to recovery of six martian bodies and modified fossilised human skeletons. Shortly after a massive martian induced psionic attack occurred sending a mob into a destructive frenzy and various humans being made into agents or even possessed by martian minds.

Quatermass was put in charge of Experimental Operation Command. Similar organisations were established across the commonwealth nations and other countries established their own. The EU org is now the newest and biggest having amalgamated dozens of smaller agencies. Further attempts were made to silence or reign him in but the men involved tended to die ignoring the Doctors advice.

Some agents have heard Quatermass if in a cryonics pod in the basement and Research has made some means of communicating with him through a computer.

Quatermass Files:
Documents of various encounters of Dr Quatermass until his death in 1997. They are used often in cases still today. The works of Charles Fort, Richard Sharp, Shaver, Charles Berlitz inspired a previous generation.

Qutermass Protocols:
Regulations and proceedures made when contacting phenomena including provisions for silencing the press. Everyone in a town thinking fearfully about martians is dangerous.

The Quatermass Foundation:
The public face of the secretive group who often control media affairs, public opperations and calm disturbances withy propeganda. It is well documented martian impulses drive humans to proliferate stories and news of the martians which activates and empowers the massmind of the collective human conciousness and awakens martian will. So agents are careful to reduce public information. 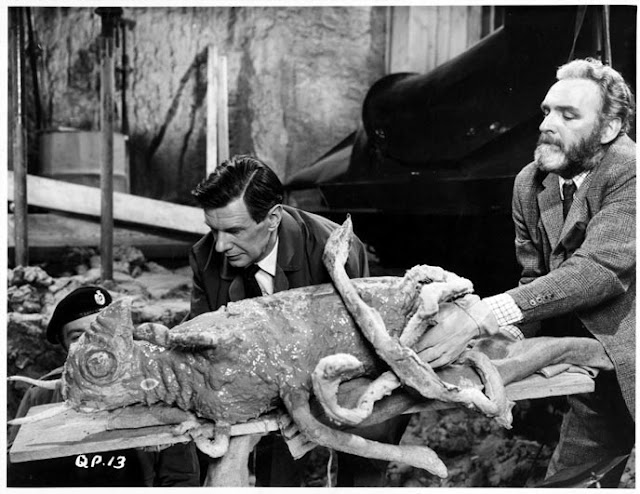 Psionics, Sanity and the Massmind of Mankind
Psionics functions through the collective minds of mankind or martian kind and where these forces overlap. The forces can be vulnerable to disruption especially from ferrous metallic conductive metal like iron or copper. Salt, pentagrams and other superstitious precautions may work. Some have created electric pentacles to resist the influence of psionics and other devices. The technology for this has improved but is mostly secretive.

When first martian event related sanity loss of 5 or more is failed roll on this table. When temporary sanity hits the victim again, the same type of phenomena activates again.

Types of temporary triggered phenomena (Replaces temporary SAN loss)
1 Poltergiest activity usually scares victim causing it more
2 Hysteria induces urge to go on a violent rampage joining with other in the mass mind
3 Empathy becomes sensetive to moods of others and the mob feeling intense emotions
4 Retrocognition receives visions of past or mars or from the hive mind
5 Sensitive prone to sensing martian phenomena or being under influence of the hivemind
6 Psychic blindness is immune to psionics even communications, healing, anything. May have insights in resisting or foiling martian schemes on a special idea roll,

Types of permanent phenomena (Replaces permanent SAN loss)
1 Dreams of martians, has nightmares and visions of the martian hivemind

Psychically Blind characters and permanent insanity. When struck by permanent insanity such a character cannot accept anything about martians and will deny anything about them and could not see one in front of them. But they are resistant to any martian mental attack (but poltergiest attacks still hurt)
At zero sanity the victim is fanatic to the martian cause and will do everything it can to aid the martian colonisation even sacrifice themselves.

Other Psionic abilities are useful and those exposed to martian phenomena may develop many other abilities. After developing any recurring temporary or permanent insanity effects may once per adventure sacrifice a POW point for a % chance = to POW of gaining an ability. Most of the first powers are minor and require only a magic point. Potential power use increases as better powers are gained. Each power requires a skill% with a base of (00%). Some abilities require SAN or might attract or trigger martian phenomena or machines.
Posted by Konsumterra at Friday, October 13, 2017