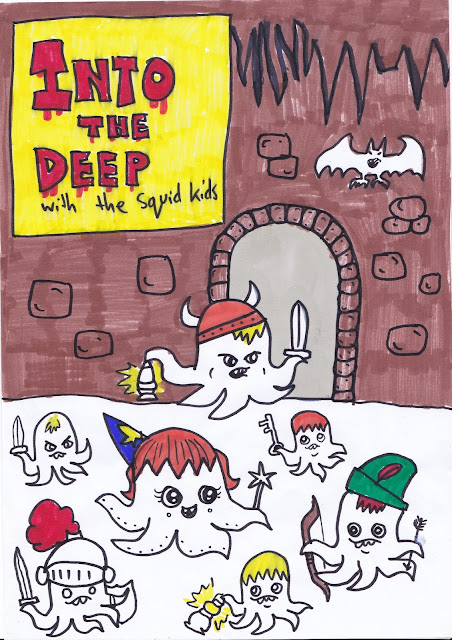 So ive considered doing a sequel to this but why not a mini game simple dnd based rpg zine. It can be run for kids or for adults who might wish to be more ironic and horrible or humorously inept dealing with humans

Basically you play a magical octopus princess (or possibly prince) who goes on magical quests for Papa Dagon and GranPaPa Cthulhu or King Neptune or the Faerie King of The Sea or whatever.

Main types of missions are quests to the surface world like rescue a octopus or find a magic thing
or
Seeking knowledge of human world by magical disguise or spying on them or spells
or
Helping the humans in secret involves spying on them and see who can do the nicest wish for filling they can of some poor common but good human. Or who can  help the most humans. Sometimes to punish naughty humans they might play pranks on them till the humans sacrifice to the sea gods. The local human church frowns on this. These are common faerie contests.
or
Possibly once the octopi know the local humans they might be sent to make official contact with human leaders, make a colony or a embassy or start a trade post.

Humans can be mean or misunderstanding of octopi or try and eat them so be careful. Humans spread horrible rumors about octopi but often they are based on mistakes of the past or octopi help that was misinterpreted. Some humans dont like octopi moving to the surface, stealing their land. resources, women and prestigious school places. But a dutiful octopus princess knows that humans cant be blamed for idiocy and stupidity.

Octopi also like to explore surface or subsurface ruins, dungeons and caverns. They are driven by curiosity and a like of shiny things. Some have a contest to find the biggest shiniest thing or a magic thing.

Possibly I could make up cards for everything too like loot, spells, etc

Might do better digital map of squidjag village
Posted by Konsumterra at Thursday, October 12, 2017