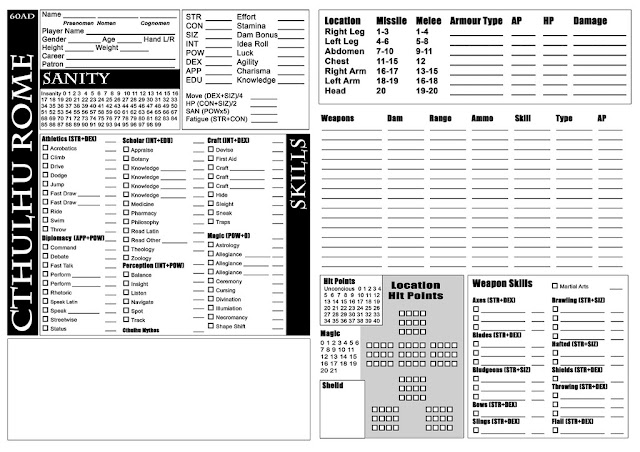 So with all the BRP news declaring I am a dinosaur again and must rebuy everything again for a system Im officially not going to care for a while and do my own thing.

My system is influenced by
RQ3 BRP, Ringworld, Stormbringer (1stEd) Cthulhu and the Darklands computer game. Gurps probably had a bit of influence.

Skill Category Bonus
I never liked the bonus as was derived from stats in most games as a bit too fidly. No bonuses like Cthulhu good but I liked Ringworld system offered a simpler alternative - have bonus for skill catagories derived by highest two stata. This can be raised to combination of both stats which means a character can specialize in a bonus catagory to be good in all skills included. Worked well in play. The magic bonus is derived by Zero + POW and has no starting amount. This meand most ppl have 9-12 in all skills early on and cound train to 18%. A better stat combo might make this 36% which would be handy in the athletics group. The bonus can be raised to max by training or experience but only goes up 1pt at a time if dice normally rolled. Bonus is also added to d100 experience rolls and allows skills to exceed 100 (100+Bonus max).

HP, Locations and stun damage
These are like standard BRP locations but I might go back to a single table to cut back a bit. I added this stun system so ppl could have fist fights and non lethal fights more often.

As an option any damage could be dealt as stun damage or real damage. Gangbusters and Top Secret/SI did this. Blunt weapons like unarmed attacks or staff or flail (also whip). Edged weapons like swords or polearms damage next lowest dice (d8+2=d6+2). Stun damage crosses off the box with one stroke like /. Permanent damage is marked with two strokes like a X. Permanant damage goes over stun damage. Eg 3 HP boxes are stroked out from a punch. When later they take 2HP permanent damage from a knife two of those boxes get a second stroke making them change from a single stroke into a X. Four points permanant over 3 staun damage would wipe out all the staun damage.

One Second Combat Rounds
Ive always prefered specific 1 second rounds instead of the vague system in place. I Use (DEX+SIZ)/4 formula for base human movement rates. It works better with gun fire rates and makes situations without cover tense. I use basic DEX for combat order not strike rank system. Works well with my car battle games.

Recoil
The heavier weapons fire less often because of recoil not diferences in weapon fire mechanism. Recoil mods are cumulative to hit per shot making it harder to hit with big guns. Vehicle weapons can be considered suppressed or mounted. Cheap home made renegade buggy might have a tripod machine gun counting as +10 off recoil. Most semi auto and revolvers shoot 2 times per round. Sub machine guns often fire 3-20 bullets in a burst with rifles firing 3-10 in a burst per second. Miniguns just get silly.

Firing only one shot/round has no recoil penalty.
Stopping shooting for one second round reduces all recoil to zero.

Bob has 62% skill to hit with a light machine pistol. Normally it has a -5 recoil mod per shot but this is -10 with a burst. He Has STR +16 and holds it with two hands +5 which takes 21 off the recoil penalty.

It is a bit crunchy but makes people a bit more reasonable and thoughtful about guns.
A tough guy with a low cal scoped assault rifle firing burst might do better than than using a heavy gun. Most of my fights last a few seconds unless they involve cars.
Posted by Konsumterra at Thursday, January 07, 2016