Babylon BRP: How To Burn a City 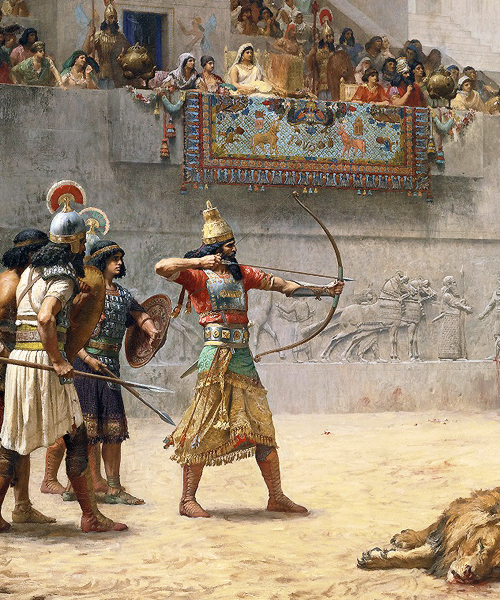 Very behind on my blog posts on this game sorry. This is about 4 games summary.

Party have moved into mode of being Nobles and directly helping the Empire. Game moving to climax of war and heroes learning arts of summoning and enchantment. Climax coming soon.

So the band of heroes granted 4 chariots and 60 medium armoured veteran auxiliaries (with spears, wicker shields, archers, javelins). They departed Babylon to bring Sumeria properly under control and prepare for war on Elam.

Party nominated to punish the city of Kartullu and the heretical Dagon cult in that degenerate town. Faced large but backward army of Kartullu but hero led force smashed them with leaders jumping in canals to escape. Began siege around city and could hear them chanting. So heroes sneaked up to a poorly manned wall by boat and entered the city by stealth. Wathched the great ceremony on crumbling ziggarut where king and priests were trying to use peoples faith to call Liogor to their cause. Kull the Champion of Marduk used hid command dragon spell to make Liogor unwilling to manifest physically. Ariana called on the power of  Adad and struck the holy leaders and king with a thunderbolt from heaven. Other fired arrows and helped finish city leaders. They fled getting a chance to damage the gate house of city. Mob panicked and heroes fled and escaped by boat through the deep one filled canals.

Army poured into the panicked town battering down the weakened gate and torching the city. Well into the night they continued killing any tainted by evil fish men and cultists. Stacked up pyramids of severed heads and Toth was busy decapitating the unclean until dawn. Some of the lesser tainted were castrated and sent to be slaves in worst jobs possible. Others were sold into slavery and distributed as war booty.

The next recalcitrant non-tax paying city was more cooperative and managed to negociate peace and payment. Spent some time in court of king working him, killing cultists in court and singling out those against empire. Toth invented a new punishment where witches were thrown from a high building into a burning pit. King was displeased by arrival of a Babylonian army expecting to be barracked but he accepted his lot. Being on border of Babylon and Elam was always bound to be trouble.

Party had time to rest and atend families. Arian had given birth to hideous centaur baby and kept it in a tower in her mansion courtyard hidden from everyone including her husband. His family were increasingly displeased by her. Most of party are priests and champions or apprentice sorrcerers now.

Got to spend more time in court and Ariana began affair with a prince who arranged to have her husband sent to front lines and killed. They were married and her ex Assyrian kin were outraged. Toth was made governor of a small city and appointed his friends in various positions. Weeded out cultists and helped raided armed force for attack on Elam. Party helped plan campaign with Princes of Babylon after squeezing as many troops as they could from city including militia, cult troops and offering Kassite barbarians and Gutians land to get lots of irregular troops.

A large Gutian force led by Kull and their king harassed the Elamite holy sanctuary city drawing away troops. From South army drew out Main Elamite army by appearing weaker than they really were. Meanwhile the heroes led their force to attack Susa the capitol. Managed to drive defenders into the city then Ariana used her prayes to Adad the weather god to destroy the gates. MAnaged to look the city quickly and take many Sumerian relics long held by Elam then fled before Elamites could rally their forces. While not able to hold the Elamite cities they had done a lot of damage. Party given talents of silver and some magic relics recovered and many cities of Sumeria grateful to have their statues of gods returned after decades in the dungeons of enemy gods.

Toth was made a king of his city as a reward and had a coronation celebration. Gutians took heavy losses and a band came to complain to Kull about this and he gave them gold to be his guard which they accepted. Their much diminished tribal king hated Kull even more.

After more rest time the Emperor asked them to travel on a diplomatic envoy to Haddadbad a city dedicated to Addad near the coast. The emperor wanted to get troops to the Mediterranean so they were to get support of Haddadbad or spy on their weaknesses. Got on well with the king and convinced him to support Babylon but he wanted no Babylonian garrisons in city and a fortune to bribe local Amorite kings to support invasion of the Mediteranean coast including territory of Tyre and Sidon. Were many cultists about also - Tiamat cult following the Leviathan form were thriving in Phonecean  lands. Killed some Asag cultists and went into mountains to harrass cult to find the mythical gaint Humbaba was guarding the forests, cutting off the supply of cedar to the civilized cults of the world.

Shamash the sun god sent the party seven magic rocks, each would diminish one of the giants defensive auras. Managed to destroy his auras from afar with sling stones and down him by cutting his legs. Once down they killed the intestine faced giant who broke down into maggots and rotten muck that began to sprout trees. Pleased the heroes went to the village of his cult to finish them off...