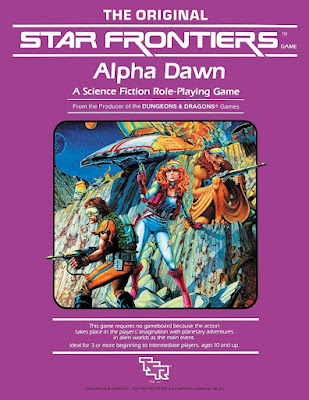 was beaten to this here:
http://rlyehreviews.blogspot.com/2022/01/1982-star-frontiers.html

Firstly I will say recent years efforts to IP graverob the original TSR 80s game is mostly disgusting. The most recent grabbers personally attacked me over a question doubting them which was kind of amazing to be so aggressive I've never seen a marketing person treat the public like this. I guess its some strange marketing approach with litigation unaware of. I get a vibe of school bullies trying out for the debate team. Babies crying about being persecuted for their right to be bigots are losers.

I had both box sets alpha dawn and knighthawks and loved them. Possibly was one of my fave games in 80s. From a period where tru-TSR box sets were at a peak - these, the first BECMI sets and gameworld 2nd ed were peak of their design.

So I got the hardback POD book on Drivethrough RPG and I seriously thought about If I could run this. In 80s I built skeleton of this into a universal RPG with SF and fantasy and spell lists (all lost) hand written I ran for like 5 years. It morphed towards BRP and ringworld and then I went full BRP between 91-2007. I was influenced by TSR top secret too, I like the system especially with areas and dragon magazine expansions. Low lethality of gins I would fix because shooting someone with a pistol says 9 times vs an average person seems crappy.

The later zebulons guide has some good tech I like but disliked all these rules. I liked Marvel but I didn't want every game to have such a table nor did gammaworld. But some of the technology is awesome. The updated setting info and races I was not into. I like the mechanons and all the volturus races should have been returned.

What was good about this game. Its a simple d10 based skill system. It has many interesting weapons and the gyrojet guns here are my fave RPG gun especially with optional ammo types (gurps high tech has good ideas too and gurps space is  a must-have sf gm book). The spaceships have no antigravity but just fly at 1g acceleration mostly and so decks are arranged differently to what most people expect in a ship which is such a nice change. Its a smallish expanding coalition without mention of homeworld or even if races really started in the area with a frontier that is manageable for a gm unlike traveller that is one of the biggest detailed RPG ever, The races are fun and weird. The Sathar villains are pretty horrible but were intended as a PC race. Later they added a sleazy merchant race version of corrupt corps with an uncertain link to the sathar. The DM screen introduced mantis-grasshopper like colony bug race and Dragon geve us their awesome ships different to sathar and frontier design. A reptilian race of dino folk with various tribes with different horns and colours were cool and in dragon. Some of the monsters and animals were bizarre some rather bioweapons but the Planet Volturus had very odd animals and multiple sentient species. I assumed all the life there was modified.

The first box/book deals with the landbound adventure mostly and the adventures are planet exploration. The second box book was the Nighthawks book with spaceships and a campaign where you serve a planetary royal space fleet and I ran in my setting and it was an awesome spacefleet drama and start for a campaign. Then there is the second sathar war campaign which is like a wargame of the whole frontier vs Sathar hidden depots. Quite a lot of TSR games had boardgame war game elements you don't see and dnd wargaming was popular with wargaming in my 80s clubs. As a space battle game its quite good. TSR went on to almost release Protonfire and then did Buck Rodgers.

Has it dated? The robot rules are great. The power and software limits of computers feel aged a bit and computers could be updated a bit. The computer belts with modular apps was staggering genius and prophetic but it feels like a mobile phone could do some of this but they with a cyberhelmet with a HUD were like giving characters a spell list. The power use of these belts seems high but its an easy fix and the apps include hardware and other tech in them so maybe but every SF game could learn from this still. I would probably add some of the buck rogers smartsuit tech into this and have certain screens require a smartsuit. BRP worlds of wonder SF had a backpack generator and you could allocate screens vs energy, kinetic or ecm vs incoming missiles and powered your gun so a suite like this would fit in SF too.

One feature of this peak era of TSR boxes is as bored lonely rural kids the SF sets had lots of solo stuff and we would solo do car chases and battles with maps and tokens and even two of us with Dragon used as SF-carwars games. I spent a lot of time with this set and the solo adventures help this feeling. Both boxes are fine battle and skirmish games. Also the fan magazines around today are amazing stuff and Im glad the Star Frontiers fandom were treated so freely for so long and have adapted to current owners requirements. Several IP graverobbing attempts seems to have had the races of star frontiers return to 5th ed (they were in spelljammer and other eds of dnd and ALternity and d20 scifi too).

Im kinda considering running it for my own SF campaign as players are unfamiliar with it but its simple and functional and robust.

If I Ran this snow what would I do?
As I don't like the Zebs guide campaign add ons I would use the dragon content I had mentioned above for races. I would like to speed run volturus then the warriors of whitelight where pc's gone space skills and fight the war then do a time jump and give players own ship and some fame for their race contacts and sathar killing. I might even have some other sathar varients not part of the military-espionage-blacklab clans. Id even have a few of the Eorna ancients about working in universities and I would say all the races and other life seeded by them in area so you could meet primitives of the known races or find a planet with Vrusk and Yazarians at war who never thought of being friends. Even sathar castes could be from ancient meddling gone wrong. Psionics and System gen in Ares mag was very good too. I might have to print up my supplement of fave rules.

I would add more cybertech and gurps Ultra Tech stuff and some extra space options like the Dragon stuff that let fighters have crappy lasers instead of a few missile shots. I would have to read up on fan content and see if any worlds were the first homes of the main 4 races I think is out there. Great RPG moments we had in this was Saurian drag racing with nuclear ammo, fighting space vampire plague (vamp from buck rogers + zombie hordes and a cult). Exploring planets, wildcat mining, merchants who murdered their crew because wages cut into profitability, lots of street battles on that city map. Lots of Frontier type adventure and injustices. I might add a separatist movement post the war for terrorists and political pundits (the Sathar have been gone for a decade we don't need a corrupt and irrelevant space force taxing us).

Im not sure If I loved the modules but liked some elements in them. I did ruin some traveller stuff here fine too. Legend of the Skyraiders by FASA would be good and the old intro adventure with ancient Pyramids.