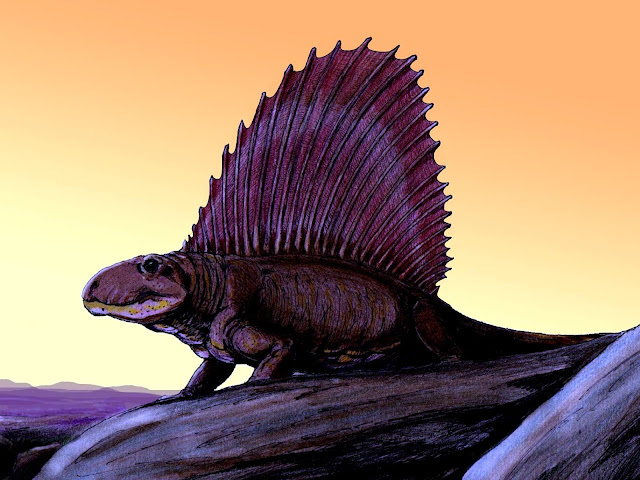 Spending all your effort to hold onto a weapon or armour (not both) requires a STR save to avoid it being eaten. Magic weapons take a whole round to devour and the beast will stop gobbling weapons to chew anything magical or certain strange metals.

This power can be very destructive to technology, metallic golems or other metallic monsters and causes a d4 damage per ENC point they steal or half with a save. The effect interferes with electronic devices like radio, radar, guidance or ignition systems. Rust monsters touch causes the monster to save or die and become a pile of rust. Spells causing rust inflict a d6 per caster level save halves. Metalic beings can sense something when the creatures get within 6 range.

This living metallic preditor (possibly from the plane of earth or some metallic demiplane) on it's own world hunts other metallic creatures to devour by use of magnetism to draw prey into it's mouth. Resembling prehistoric synapsids like dimetrodon with eyes on short stalks possibly used to hide under rivers of liquid mercury on their own world. They are dark metallic grey or black and sometimes shiny. Smaller ones are 2m long and larger ones reach 4m. Nobody knows how they got to the world and most agree it was a mistake. Possibly they were created by a mad wizard in a lab.

Black Slitherer (Magical Animal)
AC +7 HD 4 Tentaclex2 grapple + 2d4 acid Mov 6 (Climb or Swim) The 2m tentacle will hold on automatically causing acid damage each round. If both tentacles grab hold and the target is human size or less the slimy horror will engulf them for 2d4 damage and possibly drowning the victim. This also frees up the tentacles to attack but it cannot engulf anymore victims until the first is at -10 HP and very little is left.

These 2m tall gelatinous horrors make a hideous sucking sound while moving but are silent waiting for an ambush on a ceiling or in water. They resemble a black tar-like gelatinous creature that walks on dozens of short sucker feet. They have crude motion-sensitive sensory organs that do not require light and are mindless only motivated by hunger or pain. Their appearance can change as they move and none have a set form or distinct appearance. They can ooze through bars but their acid only affects organic material not metal or stone. They help clean up dungeons by eating dead or anything organic they collect in their slime. They leave a wet caustic train which dries to a crust in 10 minutes and some alchemists value. A d6 hours after eating a human-size prey they bud into two smaller weaker ones which hunt vermin for a d4 weeks before big enough to eat a human or medeum animal. Adults might eat a smaller one so they stay hidden. Adults might lurk together and seem to cooperate but it is more like coopertition.

Bonus points for knowing where I stole these from. Extra If you don't use the Internet.

Posted by Konsumterra at Wednesday, September 16, 2020