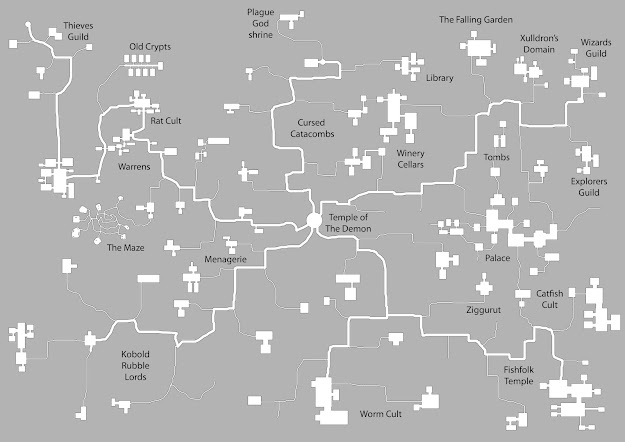 So this month on Patreon I'm presenting a mega-dungeon module on my Patreon. My earlier attempt was overcrowded and too busy. This one is spread out over a much bigger area with themed clusters connected by long corridors hundreds of meters apart. I dreamed about it a while before I did the maps a few months back. I have just blown up 8 maps from this with encounter tables and I'm ready to start work on the actual book now.

I'm pretty happy with most of the progress and I need a break from post apoc for a bit. One artist Dan Smith completed everything I asked in 48 hours and was great to work with. Others Ive not heard much from and will probably cancel after 30 days of no response.

I did read the Rick & Morty dnd set which reads like a murder hobo primer. It's pretty refreshing and I laughed aloud a few places. It made 5th ed rules more readable and helped remind me why I don't want to play it much. The module I couldn't finish reading, maybe later.

I am reading level 4 of the mad mage dnd5 hardback for mostly negative inspiration. I'm pretty sure its ok to say he is a very angry and mad wizard.

Good Features
-I like the thematic struggles of factions
-I like you get rewards for non-killing monsters but seems inconsistent who you get xps for helping as it comes up a lot
-good variety of monsters and lots don't want you dead and just want to eat
-catching a wizard learning spells, they spend a 1/3 of their lives doing it so about time
-nice links of characters to other products which I appreciate but won't affect me
-so many monsters have names which I guess is good to know
-I like the maps in recent books and really disliked the full-colour computer game looking ones, possibly these maps are what makes me want recent books like this, Theros and Saltmarsh. I even got curious to look at some other books again buy maps and linear writing killed it
-The maps look good and stealable and I accidentally got the map pack which I was pissed at first then liked them. When I read the book having these on hand made book far more readable than flipping around in the book. Of course, older modules all did this or had separate map book
-I like the detail on fungus, good stuff plus awakened giant fungi made by deep gnome druids
-Im liking the art more and paintings of monsters in this book
-I like the mad mage's ego is everpresent spying on the party and nerfing their plans and various things with his likeness. Id probably amp this up more
-Has a goblin market. Goblinoids are set up to be more neutral overall which I'm fine with
-Lots of situations activated by adventures presence but If they spend months here clearly lots of these situations will change. I like remnants of dead adventurers and damage
-There is one toilet on Lv3 phew!
-Lots of effort thinking this through and various interconnections for fans

Not So Good Features
-writers do not know what a fresco is and misuse it in text
-explaining that beads have holes drilled in them
-long-winded descriptions makes it harder to remember and harder to skin quickly
-has various corridors to add extra content but should offer hints to hide them more
-has gates everywhere but needs them marked and where they go on the map cos locating where they go might require lots of reading
-drow into consensual bondage is evil but now they don't do drugs or porn like Gygax
-still feels a bit crowded and hard to believe a bunch of hobgoblins could stop even one party let alone drow and the Xanthar guild
-magical puzzles you'd need a spell to solve so barley puzzles-poetry puzzles not really solvable really with given information, even if you have seen everything they talk about you might not know it
-treasure seems skimpy vs Gygax at this level. I could set up a shop selling spells in the market and make more money. Silver at 8th level is just beer and tip money for servants
-a poisonous thing in water effects stuffs upriver in a huge body of water....
-kinda offers to pit factions against each other but they are all evil and gotta die in the long run
-mentions random encounters a bit with no tables. Early it gives you some options for such things but then forgets. Id make my own up because resting is for the weak
-I almost feel like a chart of relations between NPCs and what level they work on could be handy like a Drow family tree. But sometimes your players just kill the shit out of everyone and knowing their names and mothers just makes it harder to kill them
-Not a lot of art, pages of text blocks, some B&W spot illustrations might have helped

Overall it is a good product and is a big fat dungeon that debunks claims dnd5 doesn't do this. It would probably take a lot longer to play with 3rd or later ed. It has got me interested in dnd5 stuff again and If I see anyone selling the DM book, Volo, Xanthar and Morkendainens books second hand I will grab. The Tasha book will be interesting as I want to see how much they have changed her lore. It's like every world-shaking Greyhawk wizard is moving to the Forgettable Realms these days and changing their backstories.

The thing that puts me off 5th ed complexity and slowness the most is pedantic fans cockblocking each other with petty rulings. Possibly in the seeming all-furry games, I played in this kind of thing came up a lot. I guess so many spells have been nerfed also so 36d6 fireballs not a thing and charm spell is pretty meh now. Theros book almost tempted me and running the Mad Mage dungeon is almost appealing. They seem keen to get you into High-level play in current DnD and as it is even harder to die than old versions the risk seems reduced. Lots of lore changes seem petty. Succubi not demons now. Sigh.

So my currently dungeon is under a ruined city by a marshy patch where a river ran long ago. The surface is mostly rubble and grassy with a few monsters and intact buildings. Some of these have connected sub-surface tunnels that make up the dungeon. I might ad a cavern level later with some planar gates. I'm hoping the separation of factions makes them feel more plausibly separate rather than the crowded motel complex vibe of other dungeons where monsters must meet many times a day like we meet other humans at a supermarket.

The Legend of Thrice Cursed Karbaal
So long ago the city of Karbaal was a prosperous city part of an ancient empire. As the imperial government began to support bloodthirsty war gods and demons the local land spirits and gods rebelled, moving the river and taking away the fertility of the region. The warlike governors had forgotten their old pacts with nature and the city was cursed. The city declined into brutishness and was sacked several times before the final reduced population were taken away as slaves to another city. Various wonders of the cursed city are still intact ruins. The monsters here are the bitter venom of the old gods. In recent years greedy adventurers came here to loot the place and set up a permanent camp and took control of a dungeon entrance. For a modest fee and 5% cut you can join up. Without is guild adventurers consider you to be stealing from them. The guild rapidly discovered there are evil cults here seasonally also and they have come into conflict.

When the cults are culled and monsters are driven away settlers will return according to prophecy. The wandering descendants of those taken as slaves long ago will return and the old spirits and gods will renew the land and strike away from the cursed fate of the ruins.

This should be done this month on Patreon and I will probably revise My Murder Hobo Manual and do a smaller dungeon zine next month.

Posted by Konsumterra at Tuesday, September 08, 2020