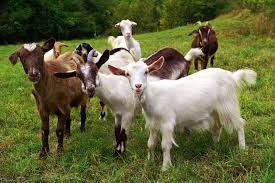 Past Goat Goodness
Goat Goddess that started all my goat projects as used in petty gods
Actually a RQ character I played
http://elfmaidsandoctopi.blogspot.com.au/2013/04/petty-gods-stuff-nanny-binx-and-behni.html

The basic campaign I envisaged for this was a peasant rural countryside being infiltrated by chaos. The nobility and cities are disinterested or corrupted and have no care for rural poor.  The church is mostly ineffective. Nonhuman races know and want to help but hate each other and wary of humans. Goats must investigate and stop chaos in secret. Humans cannot know what goats are up to and cannot be trusted. With goats it is obvious when tainted they are either adorable or monsters (but this might not always be true).

Option one is goats are farm animals awoken by magic (perhaps Nanny Binx or her children) and must initially live on a human farm solving village mysteries. As they grow in ability and learn to speak they can work on more sophisticated mysteries and possibly have a human follower to pretend to own them.

Option two is veteran goats of higher level from a goat village with friends among elves and fauns need to infiltrate humans looking for cultists. This could lead in from the first type of game.

The table in the previous mentioned blogs have lots of tables to create some heroes and villains and plots afoot in your game area. I have other posts on villages and ones increasingly corrupted by chaos and hell (see sidebars). Dark Albion Cults of Chaos has lots of good stuff for making cults too.

This would all be a pretty typical campaign but the point is being goats adds to party challenges. It also removes many normal goals of adventurers like loot, glory and status. Goals are more about secrecy and providing a world where you can eat and have babies without monsters.

You could also have a goat player following a normal party and who could sneakily introduce them to the world of magic goat intrigue and hidden chaos cults gradually in between dungeon crawls. Mostly humans are dupes, mostly stupid and ignorant and greedy. Vulnerable to chaos corruption.

Normal adventurers have their uses to goats and are worth following about or nudging towards killing monsters. Chaos forces frequently reawaken and repopulate ancient dungeons and a good goat can motivate humans and help find these pits of evil.

Lots more demons can have goat forms too like a succubi/incubi goat.

Obviously this requires own BX hardcover book and i need a goat skill list and more spells.

A goat hexcrawl for wild goats to colonise might be good. Would include local goats good and evil, predators (like wolves, wild dogs and smaller stuff like fox might bother kids), natural hazards, tasty food items, good and evil villagers, hunters, humanoids etc. Each goat needs a family tree for obligations and motivation. A lone goat is suspicious. A doe is more flexible socially and can join new herds if accepted by females and the matriarch. Patriarch billy goats are more fussy and only tolerate younger males they can get rid of if a threat. Larger herds will have more bucks especially if real threats exist. Gangs of exiled billy goats might form and hang on fringes of of a herd. Some are vulnerable to chaos cults. A billy might have several brothers or friends who support him.