d100 Goblin Tribes and Their Customs 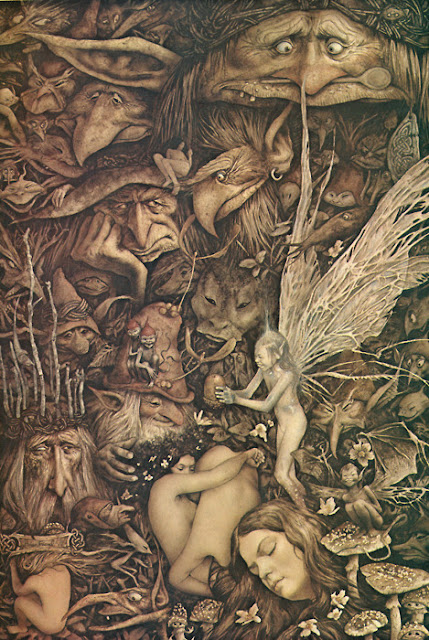 Goblins are the the most common faerie kin and the most adaptable of the humanoids, rapidly mutating and adapting to environments and breeding rapidly to fill any niche. Elves often breed them to occupy borderlands between them and as servants. Goblins might evolve into hobgoblins or bugbear tribes and many tribes have a few hobgoblins and bugbears born among them and end up serving the ruler. Some goblins might even crossbreed with other creatures. So many types of goblins exist and some are more horrible or helpful than others. They are curious for food or magic and secrets in general and often mischievous if not evil.

Each tribe has a tribe name, a habitat and prefered habits and lifestyle. Goblins are mostly short lived and impulsive but some live much longer especially magic ones.

Some tribes hire out specialists to other tribes. Goblins come in many colours which unite them in tribes and allegiances. Ogre Magi are infamous for recruiting from many tribes especially mutant goblins. Elves might breed them and even give birth to them occasionally if needed to guard borderlands.

Goblins are pretty good at using any materials to make weapons and naturally good at craft. Some are quite advanced in metallurgy, armour and weapons or even siege war. They are pretty good at salvaging from other races or victims and are capable of digging whole dungeons.

Hobgoblins are hard working and make good labour but are easily offended and provoked into violence. They tend to be more disciplined and when goblins wage war for longer times more hobgoblins are born. Hobgoblins can be employed as labourers but you need to be wary not to offend them. just swearing near them might set them off on a violent tantrum. Bugbears are elite troops and stealthy assassins and appear when hobgoblins populations peak. They tend to eat other races smaller and fancy human children most of all so humans never employ the except as assassins. Gremlins are like stunted goblin children who never grow bigger and some reach plague proportions. Other mutations and breeding experiments and hybrids are common. Goblins are very good at domesticating monsters and animals.

Goblins mostly fight as skirmishers often alongside larger races. Their craft skills make them excellent at supporting war machines of other races.

This is part of my long neglected goblin mine zone series which probably needs more work.