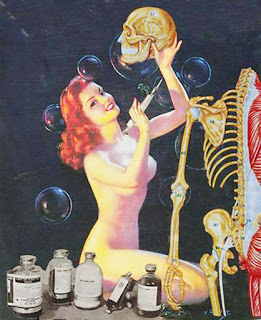 So I will work on meat wizard spells and am thinking of possibly something like breath or animus or something to describe and effect the motive force of living bodies. Psionics will be written up too which I can slap in my Psychon setting.


Bone Golem
Range: Touch Target: Prepared Golem Body Duration: Permanent  Save: none
The caster in a laboratory takes one month to assemble and prepare the ingredients (1000gp) culminating in a 24 hour ritual. The bone golem resembles a skeletal horror with four arms. The obedient bone golem has armour like platemail and sheild, HD 6, Mov 12" and four attacks using one handed weapons or may use two hands for a two handed weapon. It does not breathe and is immune to sleep, charm, hold, fear or sleep spells and is immune to poison, fire. cold and electricity. Can animate one plus CHA bonus in bone golems with this spell at a time but could have multiple golem body built and ready for the final ritual in storage

Bone Wall
Range: 1"/Lv Target:  Duration: permanent Save: noneCreates a 3x3 yard panel of spikey bones that arise from the ground per caster level. If anyone tries to squeeze through or climb they get a save to pass and take 2d6 damage if the make it past the wall, fail and they do not pass. Coyuld creat a defensive wall or maze but only walls can be created. Panels could be placed flat on ground as a obstacle also

Fossilise Bone
Range: Touch Target: One Skeleton Duration: Permanent Save: none
Cast on any skeletal construct or creation and adds +2 to AC and +1HD by turning the bones into petrified rock. Stone skeletons may no longer be counted as made of bone for other magic. The spell can be reversed to turn petrified dinosaurs back into bone to be reanimated by other spells. Each use requires a 100gp gem stone also.

Skeletal Carriage
Range: Touch Target: Ground Duration: Hour/Lv  Save: to pass but take damage
Creates a skeletal horse (or similar beast) drawn carriage for the caster and his companions. For every 2 levels of the caster the waggon has one horse and can carry 4 passengers and baggage at a movement rate of 12" for as long as the spell duration works for. The caraige is made of bone with tattered leather. Some varients include a funeral carraide with coffin space or a ox cart for pulling loads huge loads instead of people (1000lb per ox per level at walking pace only).

Skeletal Construct
Range: Touch Target: One Skeleton Duration: Permanent Save: none
By preparing a human skeleton or perhaps that of a monster or huge creature for one month with 10 000gp worth of ingredients the caster with a final 24 hour activation ritual can create a powerful skeletal monster with 1 HD per caster level. A single skeleton knight in full plate with two handed sword is the most common. A mastodon with two attacks for a d10 from tusks each, equal to leather armour is another common one. Can animate one plus CHA bonus in creatues with this spell at a time.

Hobble
Range: 3"/Lv Target: 1HD of creature/Lv Duration: Instant Save: half damage
Caster sends arcs of necrotic power that break bones. Caster can effect HD equal to their level. Victims require bones to be effected. Each target get a save to resist. If fail the save the victim falls in agony and takes 1d4 per level and requires first aid to be able to move unassisted at half speed for the next week. If save is a success the victim takes half damage and has no movement penalties.

Tower of Bone
Range: 1"/Lv Target: Ground Duration: Permanent Save: none
Caster calls a bone tower three yards tall per level to erupt from the ground complete with door that can be held with a bar, stairs, arrow slits and battlements. The tower is as strong as wood but less flammable. A tower could also be used to create a bridge spanning a ravine or river if created on side.

Awaken skullRange: Touch Target: Skull or Skeleton Duration:  Permanent Save: none
With a six hour ritual and sacrifice of a 100gp gem or 1HD creature the caster will make a skull or skeleton will become self aware being able to speak and follow more complex instructions or give them to others. Such a creature may not mindlessly attack and has stronger self preservation than most constructs or undead. If ordered to do something suicidal the skeleton may save to break free of the casters commands but generally they are quite obedient. Aware skeletons make good leaders or servants. A skull might be a useful observer or alarm

Bone chariot
Range: 3"/Lv Target: Ground Duration:  hour/Lv Save: none
Creates a bone chariot and four skeletal horses  (or similar beast) which can carry four persons. The chariot arises from the ground and includes a skeleton charioteer with a whip, a skeleton with a lance and two skeleton archers. Dismounted skeleton crew will follow he chariot as best they can. These will obey the caster and any will step off the chariot to be replaced by the caster or their companions. The chariot moves at a speed of 24" and can move at this top speed for duration and all passengers in the car get
Iron bones
Range: Touch Target: One Skeleton Duration: Permanent Save: none
Cast on any skeletal construct or creation and adds +3 to AC and +2HD by turning the bones into metal. Such skeletons become immune to electrucity. Iron skeletons may no longer be counted as made of bone for other magic but can be eaten by rust monsters or affected by magnetism. Each use requires a 30gp of iron filings also. Other versions of spell might turn to bronze instead.


Liquefy Bones
Range: 1"Lv Target: Bones in 30 degree cone Duration:  Instant Save: varies
This spell liquifies or melts bones in a cone radiating from the caster. It can melt bone structures like bone towers or bone walls but is mostly used for combat. One HD creatures die within around and cannot resist. 2-4 HD Creatures die if fail save and  take a d4 per caster level if suceed and have movement rates halved for one week. 5 or better HD creatures have no effect if save and take a d4 per caster level if succeed. Works on most humanoids or animals or corporeal undead. Does not work on invertebrates, gelatinous, ethereal, elemental or some planar beings

Bone Construction
Range: Touch Target: Ground Duration:  Permanent Save: none
Caster can create a bone structure like a large house, bridge, gatehouse, small keep, cottage with fence, whatever they desire or can imagine which rises from the ground. Covering one 1" cube per level (a 14th lv wizard could create a 140x10 yard bridge or 30x40 yard building with a 10x20 extra height section or some other variation. Creating structures indoors or a cave would only create a 10 foot cube per level. Such buildings are fully furnished and as strong as wood but slightly less flammable. It could be used in combat to create a large cage but armed persons or ferocious monster could hack way out in a turn or faster depending on cage design. Multiple castings and other spells like bone wall and tower of bone could create a bone castle.or dungeon

Skeleton Horde
Range: 1"/Lv Target: Ground Duration:  Round/Lv Save: none
Each round ten skeletons arise from the ground for a round per caster level and serve the caster for 24 hours. Then they get a saving throw to see if they wander off to cause mischief or remain in servitude to the casters will or last command

Skeleton Fusion
Range: Touch Target: One skeleton/Lv Duration: Permanent  Save: none
Caster can fuse or alter shape of skeletons for a variety of effects. Can fuse a skeleton into a bone structure like a gate to make a gate that opens (if a intelligent skeleton with awaken skull it could demand a password to open or not admit riffraff). Could make skeleton rocking chairs or animated furniture or palanquin. Could also fuse skeletons into a single skeleton centipede or behemoth combining all HD. Such a creature could have many arms holding d6 weapons or could have half as many d8 attacks or quarter amount of d12 attacks. Good for augmenting a bone house with bizarre comforts or a bone wall with built in archers or spearmen Ninth Level Spells

Range: Touch Target: One prepared bone colossus Duration: Permanent  Save: none
By preparing a huge bone colossus 10 foot high per caster level for six months for with 100 000gp worth of ingredients and bones of a hundred HD of creatures the caster with a final 24 hour activation ritual can create a powerful skeletal monster with 2 HD per caster level and 2 attacks of 2d10 and armour as plate and shield. The colossus is not very smart but obeys its master. If undirected for a month the creature gets a save or goes insane eating as many creature with bones as it can till destroyed. Only one such creature can be created at a time by any caster
Posted by Konsumterra at Monday, February 06, 2017