The War Against the Amphibians Part 2 Encounters & Wonders 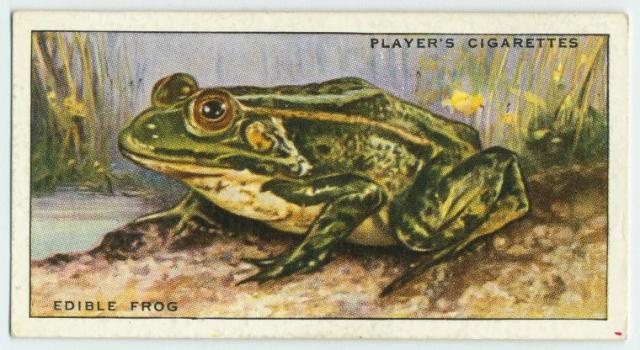 The War Against the Amphibians Part 2 (Also Gone To The Frogs 4)
This part deals with encounters during these wars and also assumes frogs are the main antagonist but you could swap for other creatures.

The encounter table is d100 but use lower dice early on start with a d6 first roll and increase the dice to d8 d10 d12 d20 etc as the invasion goes from just a few forgs to gee that's lots of frogs I can barely sleep to wow a seven-foot tall frog with a club is looking angrily at me how did it get so close. You can do the same for wonder tables as the frogs contrive stranger feats and monuments.

Wonders are for the sights you may gaze upon in the frog war. You can use them anywhere needing memorable scenery on a trip. You could avoid them and keep going or stop for a look or chat. They could be encounters but characters should be able to avoid getting involved. They could be used for quest locations or a few could be rolled for a journey into friends

Meeting frogs who are naive idiots is common that's because they are an adult in four years and these tend to be more violent and adventurous. Older ones prefer simple life at home. Many individual amphibians are ok and just swept up in the war so some might show mercy, help you escape or let you go. Many will be surprised and confused by fair play from humans.

As the war goes on things should escalate and increasingly weird and dangerous threats and weirder wonders should be seen. Water is a good indicator of danger. Puddles, mud, rain, water crossings all becomes more dangerous and should be signs of danger as the amphibians change the land with their elder magic. Making the frogs wilder in raim is a good practice especially if dark. They begin wild rituals, orgies or violent mobs in such conditions some even are berserker who love storms. Weather and rain and ambient water might affect morale rolls for amphibians. Fire and heat they dislike

Of course, were amphibians go on murderous rampages mostly on human kind.

Sound can also be an indicator as croaking frogs can be dramatic keeping everyone awake and drowning out voices. Then you might notice a deeper different croak of some other mystery amphibian. Perhaps the frogfolk are croaking out complex plans hidden in the common bullfrog chatter or casting spells!

Amphibians are masters at transforming land and raising the water table and calling rain and weather. So rain and floods might be preludes to an attack. They will sneak eggs and tadpoles of their own kin, giant amphibian monsters for war but also spread common amphibians as food as most amphibians are a bit amphibious and often eat their lame or embarrassing children while small.

Amphibians also seed spores of giant magical fungus and will even live in mushroom buildings and palaces and castles they grow. They also feed bugs and worms who they eat and have shrines to bug and worm gods. Frogs farm worms and bugs and these are often released and huge and disliked by human farmers. Vermin that gnaw wood or swarms of flies, giant mosquitoes and other bugs are used in war and as domestic beasts of labour, transport or war. Their increase is a sign of frog guerilla ecological war in progress. Spiders and amphibians have mixed relations as some eat each other and others get along so it's complicated but basically, amphibians don't farm arachnids and scorpions.

Amphibian cults know how to awaken the "true" spirit nature of the swamp with rituals and specialist cults. These can become part of the nature of the swamp forevermore. Not all areas useful to amphibians but some factions will know secrets of how to best adapt and these occupy the area rapidly. They profoundly affect local amphibians and can be small nodes or huge regions given time.

Some amphibians have come to use rats instead of bugs, especially in cooler places and cities. They also keep ratfolk warriors and ratling servants. Beavers of all types are revered and aided by amphibians who make slaves carry wood for beavers and feed them root vegetables and tasty wood. Most mammals are disliked. Reptiles can be friend or foe but tend to try and dominate amphibians.

d12 Awakened Wetlands
1 Primordial dark swamp fern forest with prehistoric giant salamanders and other amphibians and bugs that predate dinosaurs. Huge dragonflies, centipedes and bugs and giant salamander-like behemoths roam
2 Haunted slimy fog-shrouded bog choked with corpses of thousands of drowned war dead, now slimy and wormy undead roam with ruined villages and semi-submerged burial grounds
3 Dark Faerieland fungus forest swamp often with goblins and dark elves and pixies that may compete or live with frog amphibian allies. Hags and trolls and other creatures occupy the area
4 Bright Faerieland forest wetlands where talking animals live with with faeriefolk, often with satyrs, elves, dryads, treefolk and other faerie and sylvan folk
5 Sulpher swamps with strange mineral formations, pools, hot springs, boiling mud, geysers and lava pools. The amphibians here are allied to elemental fire and earth and insensitive to the hostile toxic landscape. FIrenewts, Salamanders and Toads especially practice cults and adaptions and bloodlines to thrive here
6 Marshy bogs and forests with islands, great rocks and prehistoric monoliths and caves. Rich in vegetation and fungus and bugs and worms and earth elementals. Some caves and huge burrows expose gems and crystals and even secret crystal caves are hidden inside with magical crystal properties and creatures
7 Wetland with strange magic pools abound in this strange clear swamp with deep blue pools into subterranean caves, the area is full of sinkholes and underground often flooded caves. Such places make ideal hiding places for amphibian temples and spawning pools. Water weirds and nymphs and other magical wetland beings are attracted to magic pools of healing, divination and gateways. The wetland will flood adjacent areas bringing in water from the elemental plane
8 An area of wild weather often foggy or raining or stormy and a good place for amphibians to hide or defend. Weather spirits and air elementals are found here while most flying creature struggle to fly here. Under the water large bubble spaces exist where amphibians build secret mushroom villages
9 Slime swamp with all kinds of oozes, algoids, jellies and disgusting macroscopic creatures as well as shoggoths. Chaos pools act as mutagens or gateways or living shoggoths or spawn from beyond. Esoteric amphibian cults call slime demons from beyond or tentacled frog demon behemoths
10 Fungus Forest of rapid growth wild fungus forest with good hiding places and food for bugs and worms an ideal place for an amphibian settlement. Patches of fungus forest are separated by streams and bogs. Clouds of fog are sometimes choking spores, locals can see the difference in advance and hide
11 Ice swamp with chilled water and frozen patches around the edges with ice and smow in the middle. Ice crystal monoliths and cold spirits and ice elemental monsters roam. Some amphibians cope with cold water here well but some have become allied to frost elemental beings and and can tolerate direct ice and snow and communicate with frost salamanders and ice newts of ice toads
12 Chaos mutant swamp oozing with horrible vermin that spreads from here with a malicious evil spirit lord of the area that spreads curses and disease. It directs infested creatures to obey its will and persecutes strangers. Locals who worship the spirit are protected, aided and warned of danger. Lots of monstrous mutant creatures and animated giant carnivorous plants live here too