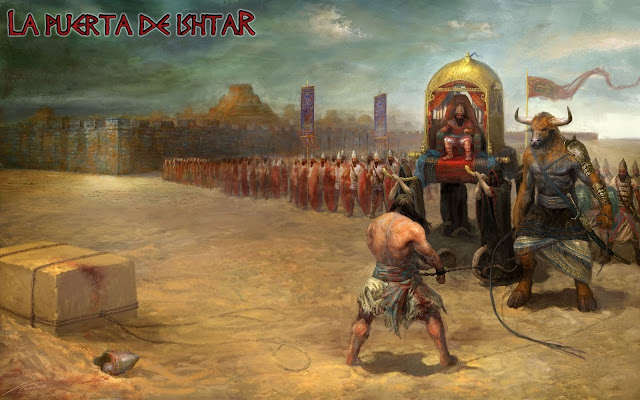 La Puerta de Ishtar (I translate as "Ishtar's Gate") Pack of Illustrations
Art pack for Spanish language Babylonian-Assyrian-Akkadian fantasy game. I had contacted  Rodrigo García Carmona maker of this RPG asking them to make a English version as i was so intrigued by art. He recommend i grab the art pack which this is. Some good derivative of historic sources. Some lovecraftian and monsters in ancient costume. Some really great images of monsters. Really good for any middle eastern game, especially bronze age.  Some despot king has been breeding minotaurs and hybrids for armies is one feature of the game i get. Inspired me to do some art and get a site of Ancient Babylonian clip art running. Or I could do a regular post of something from their and make up some game related content. I was also recommended: Ancient Kingdoms: Mesopotamia which looked ok. Testament rpg was kinda too biblical in its history which i have always mad irrelevant backwoods tribal stuff. Anyway this is a game really using cultural images to great effect and is beutiful. The glimpses of the alt history magic intrigue me. I await more of this development. Im ispired which is the most you can hope from art.

Several Cthulhu Mythos things crept into every game ive seen set here but i did it in my game too. I had a sunken decrepit city with collapsing ziggarutt and mismanaged canals (as if thew wanted a flood). Of course it was a Deepone hell hole. They spent cards to escape promptly after being suspiciously housed up right in temple district near ziggarutt . Two groups running 4 years never went back.

Also got me to dig up my fave gamer non fiction campaign game book: Gods, Demons and Symbols of Ancient Mesopotamia by Black and Green. The Assyrian by Nicholas Guild is best historical novel ever. I knew real history and still was gripped till the last page. Creation by Gore Vidal is good too but about Persian diplomat in Greece, India and china. Herodotus the histories is the best rpg supplement ever. 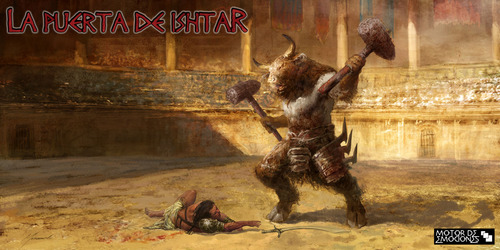 Adventures into Darkness: M&M Superlink
What if HPL went on to write golden age superheroes. Very diferent to my own ideas but great fun. Would work in pulp game nicely too. I have a few M&M products some fan stuff is sub standard but this is great. The historic out of copyright ww2 heroes they use are pretty interesting in their own right. Being ex comic industry slave i only got a few credits ever so i squint at seeing artistic alteration of real art but sigh its still good and might attract people to these public domain heroes of ww2. Looks like an entertaining read. Later: very good and snuck into continuity better

B/X Companion
This is what it sez: the companion rule book we were expecting. I could get the old red and blu basic sets and run this for sure. I am tempted to get character class book by same writer. Some spells i can steal. An amazing effort.

B1 In Search of the Unknown (Basic)
Begining DM book with training wheels - reads like a list of generic dungeon rooms you could use with any random map. Fun and i like the npc generation stuff. I didn't like this when i was 13 but now i think its cute. I like the idea of dungeons with unfinished bits and building in progress. FREE!

Beyond Red Crater
Mutant Epoch stuff is well written and full of ideas to steal. Go get the big bundle - 800 pages of crazy stuff. This module seems text denser and a bit of a slog (but dont stop doing it guys). New monsters cool. The variant breed tables for every species in this game is fantastic.

BLUEHOLME™ Prentice Rules
A good basic DnD clone with a few areas I dont roll that way but its free so get it. Introduced me to art of Henry Justice Ford (1860-1940). Id been using this art for a while without realizing it. Friggin genius got me digging hard at 1890-1930s illustration.

Realms of Crawling Chaos
Cthulhu for fantasy rules. Kinda a recap of Mythos stats for DnD. A good take on some classics. The best thing is spells and items. Some good art and old school art. Cant wait to have poor players find these spells in a book. Later: really good magic items. One is items that cost wisdom points and summon gods. Bwah hahaha! Badguy wouldn't think twice about doing it. PC could get non cleric follower to use for party. Force a kobold to call the god for you.

Starships & Spacemen 2e
Makes me want Buck Rogers game. I'm interested in DnD rules for other genres at the moment and this has some solid ideas. Startrek DnD which i would never have thought of. Gurps seems appropriate and i played several trek games and starfleet battles as a teen in 84. Later: Nice simple and delivers retro-trek style fine.Technically the crew would get better ships lots as they raised level. Good simple game - could give some bizarre treatment and add to realm of crawling chaos and have space dungeons - a good framework for SF game.  I also remember a figting fantasy book did a good  Trek type book too. Trek seems more suited to skill resolution vs heroic combat game. This book proves i was wrong. Make good intro game for my old school game at urchin books. Which reminds me Id better get it organized....

Basically meet to play older and simpler style pen paper and dice role-playing games. You are not really nerdcore if you haven't done this. We started with Call of Cthulhu horror RPG based on works from HP Lovecraft (1920s and SF). Currently playing 2nd ed Gammaworld (a comicbook sci-fi post apocalypse exploration game). Will keep playing this Feb-March. Possibly have splinter game running elsewhere. Probably be be playing oldschool Dungeons and Dragons in the future.

Other games I could run in future including:

ye olde Red book basic Dungeons & Dragons or a simple clone game (best for at least 3 sessions to enjoy going up levels) or even simpler fighting fantasy? Set on my Exile Island map.

Voices from beneath the Long Stairs Dungeons & Dragons - Cold-war politics is alive! Secret government gates to a Dungeon dimension send missions to loot and explore. Modern Army vs DnD!

Over the Top Space Opera SF Action - Using a DnD based mechanic. Flash Gordon vs Star wars. (one off game)

Original Gammaworld is DnD based post apocalypse game with lots of variety, would like to detail oz version

BRP (Basic Roleplaying System) type game systems
Cthulhu, Ringworld, Runequest3, Elfquest, Stormbringer, pendragon, Worlds of Wonder, all use the same basic role playing rules. These are some I have or could run. BRP is all about skill rolls more than fighting if possible. RQ or RuneQuest is a fantasy game. Ringworld is a space game based on Larry Niven. Call of Cthulhu is a horror game for monster hunters.

Glorantha RuneQuest3 one of the most detailed fantasy worlds ever conceived, mythic bronze age


Marvel Superheroes MSH 80s rules - game with one table does all e-z over the top fun - I ran a game of this for 20 years is one of my gamer feats. Run as Marvel universe or make unique characters in unique world. (one off game +). Can play pulp era, Victorian or golden age or other period game.

Starships and Spacemen visit Carcosa planet of Evil! (would be hilarious)
Posted by Konsumterra at Friday, February 01, 2013