Recent adventures of the third expedition to Xor 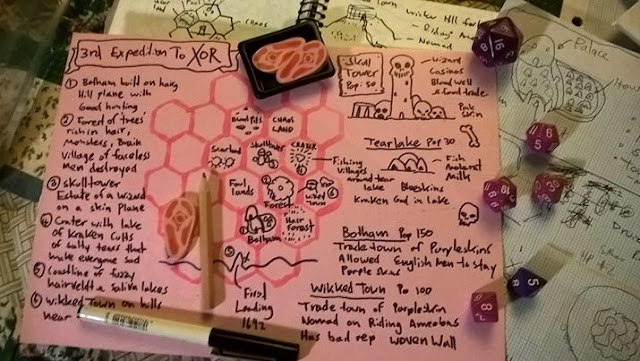 Running my Xor setting gives me a good heads up on what to create next. Like the market, dodgy deals and carousing tables came from a single session. What I need now is something like a d100 Xor settlements from shacks to cities. A more detained settlement generator and a hexcrawl map of a campaign area. I ended up using map I generated for my last native Xorians game this sessions as it was all done and ready to go. I will expand this into a starting mini campaign setting to help gamers start play faster. I'm still open to other ideas. I need a hard copy for editing and use in play and hope to set up a design pc shortly.  I guess sample content based on my tables would be useful and help fill some side bars and boxes. I want every page to have a short Xorian saying or phrase or proverb too.

Here is a bit of a map of last two player groups merged. Thanks to dallas for the meat erasers. Todays game had a player sick and a schedule conflict gage merged with ours and we ended up with five players.

Everyone had two days before visiting the lord of Botham who has offered them a Quest. So the lads decided to look for followers, go shopping and carousing.

Robert had stuff to research from his living meat spell book and shopping. He has five zombies and is delighted to have so many.

Gerald woke up in a giant crab shell miles away with adoring crab folk. He had defended their honour or something and the family were now big fans. Two joined him as followers and he has dubbed them his knights.

Snori awoke with a tiny face on his neck after party with exotic merchants. He visited a priest who told him how luck he was and to make sure the face doesn't say bad things. Not very comforted but Snorri believes he is now in hell.

Munto got drunk with a priest who told mim of a community of outsiders like them living in mountains.

Tom looked for shonky deals in alley ways and a ogre offered him strange gold coins for a oiled massage which he declined. One of his mutations has made mini-me clones drop off him and he has kept one as a follower. Two escaped one got eaten by a dog. They don't talk much but gibber and bite. He also recruited a  cannibal halfling with a blowpipe.

Anyway the lord sent them to kill or deal with faceless druids of the forest who have attacked villagers. In return they may occupy a abandoned village as his vassals and take some settlers. A survivor of the druids an old man was met among refugees who offered to lead party.

While crossing the hex they say a rolling flesh sphere approached. They fired at it and missed mostly but up close it's vertical slit mouth opened and began snapping but they splattered it. Robert tried to raise it as zombie but it's soul resisted and it began chomping again. He theorised big monsters might be more resistant to the spell. It was the first time the spell had failed (I might mod the spell I made as not enough have gone wrong). The party took it's teeth and and skin and some meat and marvelled as the sphere had a meat covered bony shell, jaw, guts and no visible brain or sense organs. (a reskinned ochre jelly).

So they came to the forest and saw smoke from a community and moved into the fleshy Lorax woods. Marvelled at bugs, featherless birds with wing membranes, the floating jellyfish (good eating). Something approached the party, something big. A great fleshy hydra as big as a ox came at them but Tom managed to deal a terrible stab from behind and the thing died. Pulled it's teeth, took ribs for a BBQ and moved on.

Heard a ritual and approached a bone compound wall with a fifty foot brain inside with the faceless men inside spit roasting victims, beating drums and dancing with their terror birds. These faceless men had bone swords and javelins and war clubs. They wore coloured lorax skirts except the chief who had a vest. No sign of their "druids" who wore skin hooded capes. The chief carried a strange ganglion bundle of meat too. Tom climbed the wall while the rest of the party opened the gate with Roberts knock spell. The leader died with a single rapier thrust and the gang and the zombies tore the terrorbirds to shreds. Robert used a audible glamour spell to make the celebration sounds continue covering the sounds of the fight. The faceless men went down and Robert was pleased how many good corpses survived but mostly not ones killed by Zombies. In LOTFP with a definite kill I describe horrible death.

The party got ready for more carnage. Tom and his halfling climbed the slimy brain to check out a hole in the top. Snorri helped the living impaled and burned bodies on the spits and the old man kindly killed the horribly mutilated and burned kinfolk. Snorri watched the brain entry and took cover after leaving a pile of corpses in front of the door as a obstacle. Gerald and his crabmen took position by visibly in front of the door. Munto waited by entrance and Robert surrounded himself with zombies.

After sound died and the cultists inside aware something wrong four sub chiefs with swords charged out, several losing initiative from pile of corpses they tripped through. Behind them four acolyte druids with skin hoods and iron daggers charged out. Inside two leaders of the cult summoned demons. Snori, Gerald and the crabmen held the lines and several acolytes were mauled by zombies. Robert got a few stabs in and Munto stabbed a few more. These guys were tough but the party over five minutes hacked, stabbed and tore limb from limb to victory. One demon summoner was grabbed by his demon and dragged to hell. The other summoner was attacked and his colour slime demon escaped control fleeing into the forest. One bos escaped to the forest. Meanwhile inside Tom had stabbed the leader of the cult. Several followers were unconscious and alive as were some cultists.

Inside they found the women and children attached by umbilicals. They cut them free and a few lived. Snori cut the belly button off a captive and attached him to a cord and he became attached. The cultist was ashamed of being feminised by the process. Robert found a niche for sitting in the brain and it squelched around him. The brain gloated Robert would never escape but he willed his zombies to tear him free. Found more spellbooks and lots of pheromone potions. They debated throwing away the dragon booster hormone some thought it should be sold as nobody had seen a dragon. They also debated the keeping the compound and killing the brain. They also found the secrets of the skin face masks. Tom thought If he wore one he couldn't be distinguished from other six legged Englishmen.

Tom and Munto found the escaped cultist resting in bone ruins. Everyone else rested and recovered over three days and Robert made more zombies. They went to investigate the ruins but Tom and Munto scouting the weird lights saw grey men exit a meat pit and vanish. The party found the pit and robert gave a lantern to a zombie and sent it in. It fell 30 feet and was pulped into burning gore and broken lamp bits. Snori went in and they the rest came down. Hanging on bone hooks they found living human skins which could be worn by climbing in slits in the rear. Robert was pleased as they could hide his zombies.

Found a meat chamber with tables, a bar and patrons and barmen with no skin fused to the floor and furnishings. They offered keratin cups of the local brew (blood or serum). The party were puzzled why this place existed and the people made generic smalltalk. Tom figured it was to train something infiltrating humans. Another chamber was a operating room and they put a zombie on a slab and watched it get restrained, it's brain sucked out and left overs thrown down a noisy sloppy pit.

The third door led to a Migo metal complex with a brain storage room, a costume library with metal weapons and clothes and currency. A Migo hibernation chamber was a problem and the party killed four migo and got two good condition migo bodies and six grey man skin suits. The party went back to the brain village to ponder the strange treasures they got. Gerald managed to knock himself out and munto webbed himself playing with odd devices.

Was pretty fun. I might try and join a 5th ed game and hope to meet Dallas to plan some local shenanigans and online games.
Posted by Konsumterra at Sunday, May 21, 2017