Updates and The Sacred Temple of Erwadu Playthrough 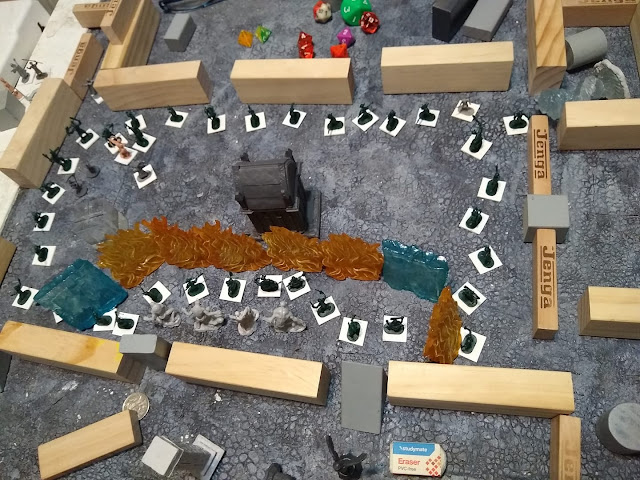 Feeling up to date on projects sorta and starting on next phase.
Green guys are 42 petty slimy stupid devilkin, big grey ones are 4 mummies
2 mummies almost did a TPK a while ago
Top left is party retreating to a bottlenck

As Exilon in play now my next Euro style fantasy setting will be up next with Shadelport, The Threefold Land, Sour Hill and Auldwood. Lots of spooky castles and knights and faerie trouble suitable for Midderands and Pendragon type adventure.

Dungeon Delve The Sacred Temple of Erwadu
Not only is this module in the classic style it would rank highly in comparison with the best. Players were exited when I mentioned another dungeon delve so it may also happen after this. Remids my of the old Aztech pyramid module C1 in some respects but is smoother to run. Its one of the best Mesopotaimian themed products ever. Id adapt it to my RQ campaign too. Im biased with the topic being Sumerian/Babylonian inspired which fits right into the current Exilon setting campaign. I have changed the setup a bit.

I had a character aided by Ishtar temple some time ago and he owed them so made an oath to raise a party and go to the fishfolk city a week before the new year to enter the Zigguratt of Enki. The party arrived to a huge crowd after a 10 day river trip across several kingdoms and met the three greatest kings of the cities on the way saving Amazon city for later. Heard of undead vs barbarian hoardes in the waste and southern empires venturing armies into the barbarian wastes to hunt undead. The party were a bit surprised this was a big seal and met the local king and stayed in the new temple of Enki. They heard the adventurers were part of some city renewal ritual and most had failed for decades and the king was old and frail. The palacial conditions were a bit of a prison too. They got the best of everything and some indulged in temple holy harlots from the king. He promised wealth and titles if they returned. They were told only seven could enter. Lucky faimiars didn't count.

I will minimise spoilers and be brief here sorry.

Party entered avoided a dathtrap and were sealed inside. Found a great chamber with lots of doors. Searching found a extra door and two wells. Had a fight with an elemental which bothered them a bit. Found a secret panel but it made them wary and go elsewhere first. Found an illusionary coridoor and the draconic shifter turned into a winged human and flew into a wall and hit the floor triggering a trap where he was dumped in water and attacked by four horrible monsters and was even knocked out. Others dragged him out while wizard summoned his wasp men allies to distract the monsters then the fire priest blasted all in the area with holy flames killing all and providing a meal.

Found lots of swarms and some nice treasure and puzzles before finding a tomb. Cautiously opened it releasing mummies and slimy hoardes of damned souls from hell. They were slow, regenerating, idiotic and a horde. Four mummies also a problem especially with other fear aura. The new priest turned out to be hard to hit with a shield spell and the warrior used his anxe and bow to kill lots. The changeling made a druidic firewall that did lots of damage and lots of party got out of the trap zone and into a defendable corridor. The monsters blocked each other and had entangle vines slowing them. Many of the party hit by fear but once mummies gone the last devils were destroyed. Was a long slow resource fizzling battle.

Have been on Facebook getting players to roll up what their followers left outside are up to carousing or whatever. Baalbek's chariot driving bard was turned into a pig and got restored and went up to Lv2 on his own.

Plenty more to follow but players all being cautious, methodical, are challenged, are wary of resource depletion. Have used half spells and HP with plenty of healing magic. Very satisfying.
Posted by Konsumterra at Sunday, July 17, 2022