Cinder, burning souls of the damned 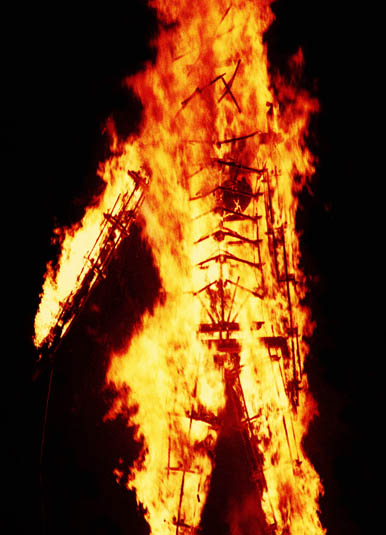 Have some shopping im reading through as my xmas stuff for me arrives. Lotsa cthulhu, tiny konami diecast heavy star wars toys including walkers that pose amusingly. If only you could breed starwars figures, think of the money. Got monster books for Umerica and Mutant Epoch. Still reading DnD5 learning how cockatrices got nerfed.

These are a form of tormented damned soul from hell. They mostly dwell in great fire pits but are sometimes made manifest or summoned by evil. When left as guards they sleep by cooling to a black carbonised corpse in a pose of agony that begins to glow like charcoal then move. In carbon state their spirit is in hell being tormented. When alert and glowing they are animated, impatient and in pain. They hate the living out of jealously and think killing others diminishes their pain for a moment. They resent being summoned or used and will turn on masters. They are called to earth through dark rituals including burninga a victim to death but a victim of a witch hunt will do. They form from ash and burned remains. When earthly form is is destroyed the body explodes and breaks down to carbonised fragments and the animating damned soul returns to the pits of torment

There are exceptional 4HD powerful versions with d6 damage instead of d4
1in6 can teleport into a fire in sight range once per round
1in6 can fly with great tattered cloaks
1in6 can create smoke cloud once day 3m radius all -2 to visibility (frost type make fog)
inside breathing victims save or choke helpless and can only move out of the cloud to recover
1in12 can regenerate 1hp/round imersed in flame (or alternate element)
1in12 can kill a human and they become a cinder, their soul damned to hell

d12 Encounters
1 An evil cult cound the remains of burned heretics and have created two cinders they trap in a well bottom. When the cult is investigated they give clues leading investigators to the wells with stories of human remains
2 An ancient storage vault in a tomb has a Cinder guardian protecting funeray urns and semiprescious stone grave goods
3 A party of evil adventurers serving hell were all killed by a fireball accident and a school of pyromancers used their ashes to make cinders they send out to burn down homes of bailifs and magistrates and inquisition records
4 A fuming vent opened an entrance to a hidden shrine to a volcano god guarded by four cinders protecting obsidian and platinum relics
5 A gate opened and flame abhumans from the plane of fire came with gifts to trade and were killed by adventurers, cinders arise and begin attacks on villagers searching for their killers. Killing them or helping them find justice will end the problem
6 A house fire of a miser has resulted in an angry cinder arising from the ashes nightly to start fires. Fire marshals are ready and some guards but experience fighting undead always appreciated
7 A witch has mad a magical oven that can turn a screaming victim into an cinder she commands. She puts some on guard at her door and in her hearth but when she has enough she sends them to attack human outposts for burning her sister
8 Locals burned some old women to rob their property and an imp made a bargain with the women for revenge. Three cinders arise a month after the burning and kill those responsible and set fire to civic buildings and the church
9 The local fire wizard school really is a front for forbidden necromancy and they have developed a ritual to use a fire elemental in a funeral pyre to turn burned sacrifices into cinders the wizards store in sealed urns and sell to local dungeon bosses
10 A local bandit raising funds for his anti elf crusade was mixing alchemical explosives at home when the lab exploded killing him and his family. Now several cinders arise and fight in the burned rubble reigniting the remains nightly. Eventualy the winner will go on a rampage burning and killing the neighbourhood and possibly to the local elf interests to start fires
11 Woman killed by fire mephits while relaxing at a hot spring now haunts the spring attacking those who try to use it or the bath house or sauna
12 A century ago there was a fire that burned the street down killing many residents in houses and sweatshops. A cultist whose ancestors died has decided to burn it all again and raises several cinders from buries remains they have dug up in secret in a cellar

Posted by Konsumterra at Thursday, January 14, 2021