Noble Lands of Auldwood & The South 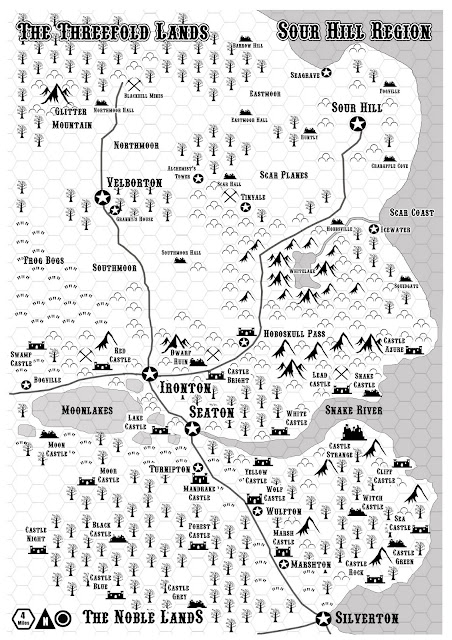 Thirty years ago the civil war began breaking the third empire into seven warring kingdoms. The north has been in decline, ignored and civilisation has retreated. The so-called noble lands were a quiet retreat where nobles rested. Though outside those towns are in the great Auldwood. An ancient forest where strange things happen and spirits haunt the dreams of humanity. Many small knightly keeps dot the forest, all isolated by old families many with strange secrets, local hauntings and curses. Weird things happen here and old fairy tales come to life. So I'm reinventing this region to be more horrible which seems to work as a method.

Main Themes
Visiting various places in a haunted forest and cursed manours
Class system is obnoxious and adventurers are ambiguous and don't fit in
-only nobles may ride horses or freely trade in magic items
-knights are better than you and unlikely to let you in the nice places
-commoners resent upper class or rich who ignore injustice
-rich when isolated get up to terrible vices and blasphemous frolics
-if swear an oath to nobility and granted land and title only way to join the nobility
Cults, criminal magicians, evil priests, dark faerie powers from beyond
Return of prehistoric powers and the old religion as state crumbling
Faerie tale reality and dreamland powers are spreading

The Three Big Towns of the Noble Lands
Ironton - mining, smelting, weapons and arms made for the great civil war, garrison
Seaton - port with many exotic goods and magicians live
Silverton - local capital, a centre of nobility, vice, churches and trade

Tables
Generate minor estates and manours
Local curses or weird events
Courtly stuff for knights
Spirits to meet on the road
Cults and factions
Posted by Konsumterra at Tuesday, March 31, 2020