Cthulhu 1490 vs House on the Borderlands 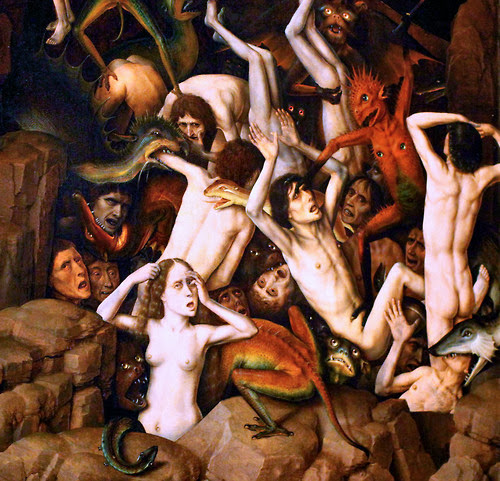 Tonight party was gathered with leader Edgar the scholar knight (Hugo) was absent in court while his minions went to check out report of strange old house and some men disappearing.

Conan as Gregor the surgeon of the knights of the sword
Andrew as Axel the robber knights
Hans the sword knight, aid to gregor
Steve as Corr the Pict
Twobeard as Rhinheart the merchant
Olaf as Astrid the Swedish wise widow
Gabriel as Hugo the bandit
Andy as Harri the hunter

So the party arrived at their other base the serpent caves, as prepared to go to the strange house in a ravine where six men vanished.

Rhinheart had while absent during the werewolf hunt had spoken twice more with his voices in the mist calling spell friends. They taught him Bind Lycanthrope when he told them about werewolves. Two more visits anb a fumbled luck roll and he woke up with a scared shaved head in a field. Small metal things were attracted to him and his beds and clothes become mold infested. Heard clicking and buzzing sounds.

Gregor had been learning power to call great fiery wrath of god from the Necronomicon in Leipzig. Axel took over a bandit gang and drove of anoterHari kept trying to learn the mist summoning spell but failing, the Serpantman teacher in priest form getting tired of teaching dummies. He reported with his slowly reactivated serpent man lab could detect a dimensional anomaly.

So in morning party went to canyon that Corr had already dreamed of.

Found house isolated in a mini mesa island of land in middle of a canyon. No way up. Harri grappled up with hook found in stream and sneaked to strangely built house. Saw pig tracks. Heard some squeals. Ran to look heard squealer other side. Repeated then doubled back to see a surprised pig head which fled.

Helped rest of party up. Harri kept hearing them pigs yet others didn't. Did see proof of pigs walking on hind legs and gashes of tusks and hooves on house doors. House boarded up and doors barred. Smashed down kitchen and found weird items and peeling paper on the walls. A lamp of intricate design. Found a set of incredible ceramics with a date of 1850 on them found by Astrid. Found a pocket watch, funny books in strange Norwegian and English and a photograph which really upset them.

Gregor Commanded they take nothing and stick together after the mercs tried sneaking upstairs. Found suit of armour and halberd that looked good but useless and made only as ornaments. Found a awesome 1850s musket trap in weighed trapdoor to study in attic. Astrid felt ill at ease after a prayer and Rhinheart felt weird preassure waves comming from bellow. Poor Henri kept hearing pigs.

Found journal and went into basement found bricked up entry hole and huge piles of crap piled on floor in a heap. Moved it, found trapdoor down 40 foot into windy damp cavern. Some stayed as guards while a few followed passage upwind. Went a hundred feet into a huge 80 foot wide pit. Fired an arrow up almost a hundred feet up and saw nothing. Not possible to be under house. Multiple side passages. The sensitives felt strange energy. Rhinheart heard clicks and felt pulses. Widow Astrid felt unseemly presences and everyone heard the pigs,

Horde of demented squealing killers charged. They backed into entry passage and killed them with superior weapons and armour only a few at a time. Astrid maimed many with thrown knives. Rhinheart's eye burst and a biolaser fried a pig. All unsettled by this. Rhinheart couldn't feel anything odd.


Back at the Pit Corr, Harri and Gregor battle two more then went after rest. All met at battlefield and collected dead pigmen for the universities and circuses of Germany.

Back to house did a quick loot and prepared to burn hell house. As ready scratching from basement then at back door as pigmen blocked exit. Whole house magically flaring and pulsing to those who could see.  Party tried bashing through pigmen to escape with wave after wave of dead pigs as house groaning and shuddering. One by one heroes battered way out and killed pigheads. Corr, Axel and Hans like profesionals pushed the wall of pigflesh back so party could get out. Astrid pulled a sword from her dress and hacked through. Rhinheart  was pleased to slice them at a glance. Gregor at rear with sack of loot saw visions of red sky, strange moons and a sinister red beast headed god before just escaping the houses next jaunt. Pigmen slaughtered and three alive.

Party returned to serpent cave. Serpent man in priest form dissected a pig and Gregor gave one to his absent brother as a gift. Some tension there over the business end of operation. Axel unhappy that aristocrats still hold power of life and death over him and his 80 odd men at arms he commands. Rhinheart's eye seemed ok but clicks started up if serpent came near to look at. Rhinheart on next chance visited the fog and the voices offering them anything for personal power. They said they already were learning lots from him but did request sacrifices be left for them, this time human.

Armour and parrying made party survive this. Something Cthulhu players in modern times cannot do.

Thanks to realms of crawling chaos book for some cool mythos tables and RQ3 Vikings set on powers for a priestess of Freya. Tribute to William Hope Hodgson for the House on the Borderlands story.

Saw Cthulhu7 rules from Gencon - a bit freaked at first. But eventually comes down to simpler maths but stat change and generation from BRP and how backward compatible modules will be remains to be seen. A few little changes i like so will get but i have just got used to 6th so wont change in a hurry. I hope move away from BRP isnt over some bits with open license or some legal shit. Strangely now seems to me like my d10 game of my design in 80s i gave up for BRP as it was evolving closer and closer to RQ/Ringworld and was originally star frontiers based. I was just gonna buy a shitload of stuff for game. Will get mecha anime and some other books. Now I have 7-8 players in Cthulhu i might get to try some other genre stuff?
Posted by Konsumterra at Sunday, September 22, 2013