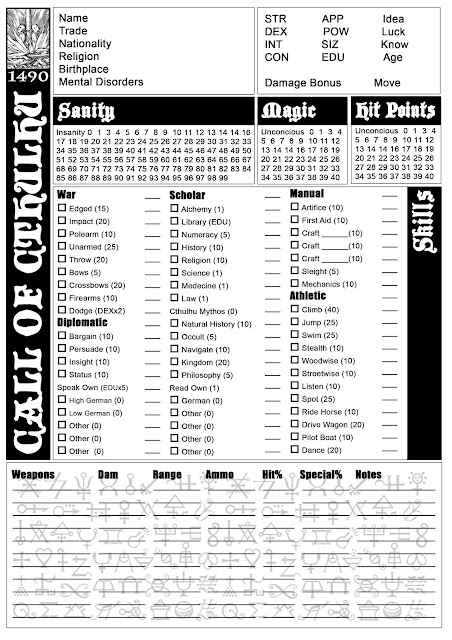 For a game i ran initially as a one off break from regular Cthulhu has been fun 5 sessions.

I might tweak some more but ok for now, better than hand job ones players using now.

The party have turned into vigilante witch hunter heretics. Also taken over a bandit gang which assimilated another gang so party have 40 armed thugs.

Most recently Raided castle of a robber knight accused of horrible satanic parties so the team climbed up walls by night and tried to assasinate Englebert the Cruel. He was a known warlock and many churchmen and merchants and even a Mayor offered rewards to stop him. So instead of an easy target he turned into a demon and attacked with a huge black sword.

Wearing plate and immune to mortal weapons, only the pagan Pict's axe could harm it. With a potion they blessed a mace and the gang killed him with a few wounds. His witch concubines were battled and even cursed a player before being killed. and his men fled when saw parties men approaching. Party freed prisoners, returned church loot, returned Mayor's favorite serving boy, and made good with officials of two cities. Party hanging onto castle and hoping can turn their gang legit.

Party still seeks to stop the Black Man and the warlock Albrecht and stop the apocalypse.

Poor new party members keep being surprised at how horrible and corrupt party is. Party keep considering killing enemies with invisible buildings, kidnapping and arson in the nae of god.
Posted by Konsumterra at Monday, September 02, 2013