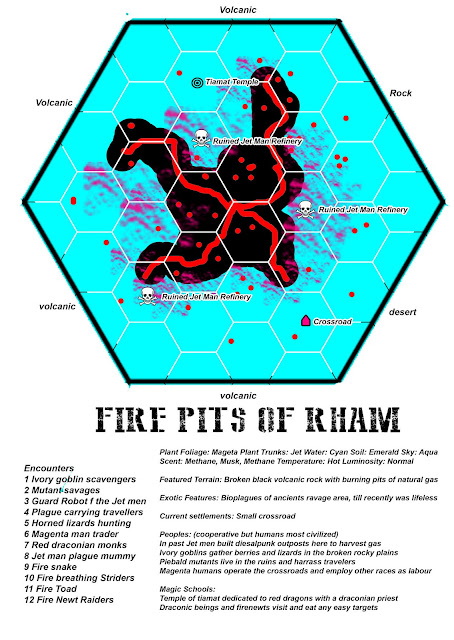 Running my test pdf of Psychon. Needed a compiled hard copy to make more hexes. Not intended to be profesional just to be usable for now. Will streamline a bit in next edition.

The fire pits are dominated huge volcano with rivers of molten rock flowing over the stubby cone. Magenta shrubs and tall thin trees sparsely surround the volcano in the cyan ash based soil.

Pits filled with burning gas abound and man made structures may accumulate explosive gas. Ancient biowar cleansed all life here but several huge deco power stations and banks of huge half buried transformers can be found. Power lines and great pipes can be found. Many unsavory types have used them as lairs. jet men zombies guard these great lairs.

Mutants are piebald and rejected by all races, plus many have other aberrations like tentacles. Goblins are more interested in food and avoiding death than taking risks with violence. Cowards but willing to labor for the magenta humans who dwell at the crossroads. Desperate for business they greet strangers well.

The Temple houses more people than any other place in the hex, over 85 persons. Persons includes lizard men, draconians, fire newts, red and yellow lizard men and emerald snake men. A red dragon is the evil high priesr in disguise but most in cult dont know. The temple is a war forge, with huge supplies of natural energy but low in valuables, so the temple sells weapons salvaged from ruined refineries and plants scrap for cash. A great bronze golem guards the dragons hoard. The dragon is growing so it will be chosen by grandmother Tiamant as a champion. He hates serving in this dump.

The plague is a fever and very contagious, but survivors of other severe illnesses may get a save. The crossroads and the temple have different cures (crossroads is a magenta herb, the temple use dragon dung fumigations). Many mutants are carriers. Week one the victim gets -1 on all actions, -2 second week till -4 reached. At end of fourth week save or die and become a zombie.
Posted by Konsumterra at Sunday, May 12, 2013