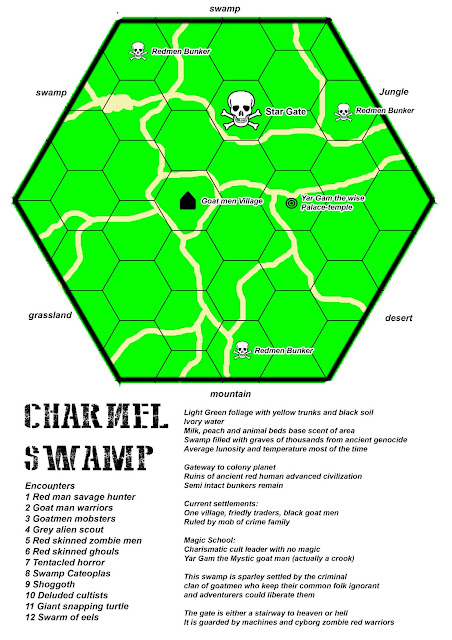 The black goat men are reasonably willing to trade but their leaders and only holy teacher are common crooks who are watchful of strangers touching their dupes or trading outside the gang. Some younger thug bucks paint supposed magic sigils on their heads and play fearsome music. This makes them mischievous, risk taking and keen to fight or riot. Mob bosses use sigils to brand their warrior recruits for their houses. If bucks discover they dont really serve a devil lord will be angry and possibly go mental.

Redmen in ancient times came from their bunkers and built the gate and then mostly vanished. Nobody living has got the gate to work in known history.

The muddy mess of the swamp is caked with redmen corpses well preserved. Some are undead.  Deeper has different, often pre human species.  An age of blue turtle men and yellow crab men used to dwell here, and some Cyan humans were their slaves.

Strange necromancers have come here to raise armies since ancient times. A few necromatic hordes entered the gate and never returned.
Posted by Konsumterra at Tuesday, May 07, 2013