Sewers and Cesspits 5 - Sewers of Hell wonders and dressings 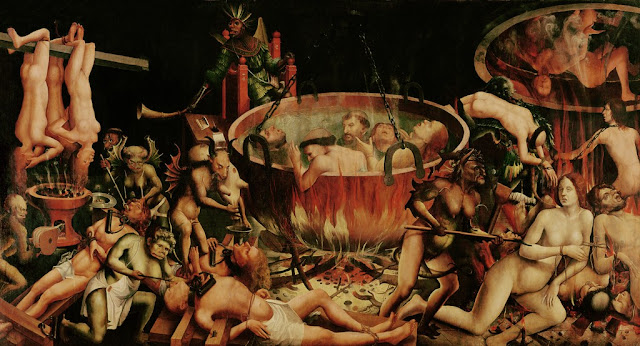 So sewer of hell is a sort of interconnection to all the proper layers of hell, the boiler room of hell and even to the sewers of the mortal realms. Not formerly a place of torment but that does happen too. They can be a alternate way in and out of hell but can also be worse than systematically passing through hell illegaly with a passport. Mind you the gates and ferrymen of hell have some pretty terrible fees so sewers often seem like a alternative. Plenty of renegade devils will offer to show you the shortcut to the next level then leave you in a eternal maze of shame and filth. Dedicated to the Mongrels, you know who you are nudge wink.

Some particular hells like the swamp hell or plague lands connect well here as does boiler room. As to escaping sewer hell that should be hard. Easy to get in and more likely to take you backwards than forwards. I guess when players really regret it and don't want to come back it it a sign they have been in too long. Entering the boiler room might make them regret leaving.

Sewers of hell have many damned trapped or who tried to escape some other layer. The damned are mostly naked miserable humans. Many here are trapped awaiting transport to a fresh place of torment and many try to cross the sewer stream but cant until they have learned some lesson. The devils facilitate this with horrible trials and scenes of torment. The damned of course keep returning refreshed even if they seem to die, sometimes death just moves them backwards on the snakes and ladders game played out on the realms of hell. Devils often refer to their damned charges as human effluent, turds and shits who deserve to be here.

Future Hells Include (still unsure if 7 or 9 or irrelevant cos i can do more):
Ice hell, sea hell, a desert hell a brass or iron hell of metallic torture stuff
Hell city might be generic for cities on each layer or a eternal horrible Brugel city

If you speak to a devil tormenting someone they will usually explain they are just doing their job and how their victim performed horrible deeds and deserved this and were warned.

I will talk about passports in hell later. Visiting demon mercenaries and bounty hunters are supposed to carry them.

The dressings tables are somewhat horrible decor to come across but is mostly harmless common scenery. The wonders are really horrible mind scarring things you have been warned. None of them must lead to fights but might if players want them. You wouldn't believe I couldn't finish DeSade. Really i'm more into medieval art. Next section is encounters and hazards will be part 6 of Sewers and Cesspits.

Metal lids on sewer access plates all have occult sigils on them preventing certain types of devil or demon accessing them or keeping them out or in. The metal rims covering the manholes are part of the seal and the seals are worth little without lids. Sometimes the lids and seals are mismatched making them mostly worthless. Removing the fittings ruins them so there is no way to remove them without ruining them. There are gates, grills and portcullises with the same properties but much less common. You might find something trapped in a dead end or area sealed several ends or you might be able to trap a entity.

Also sewerage problems of the surface world are the least of your problems. Rivers of hell frequently flow through also. Sewerage is still most common 4in6 times.

d20 Liquids in hell's sewers*waters from river of hell
1 Lava
2 Burning sulphur
3 Revolting bile
4 Boiling oil
5 Boiling blood
6 Boiling urine
7 Diseased puss
8 Acidic slime
9 Maggots or snakes
10 Mass of molten Lemures or writhing larvae
11 River of liquid flesh with moaning faces
12 Miserable moaning phantoms
13 Molten lead or other metal
14* River waters of Acheron - river of woe where souls cross to meet fate but neutrals sit on banks
15* River waters of Cocytus - river of lamentation where frauds and traitors and unburied wallow
16* River waters of Eridanos - the amber river at the the end of the world that traps victims forever
17* River waters of Lethe - river of forgetfulness where souls are purged of memories
18* River waters of Phlegethon -  river of of fire, burning diseased blood where violent souls are drowned
19* River waters of Styx - river of hate used for oaths, drinkers lose voice for seven years, destroys vampires
20* River waters of Vaitarna - river of blood, vomit, pus, hair, fingernails with heaps of bones on its banks and mud of blood and flesh, full of leeches and crocodiles, surrounded by vultures and ravens with iron beaks (this bonus river brought to you by Hinduism)