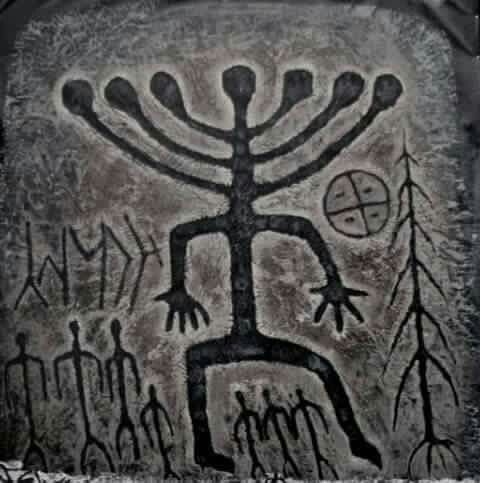 So caves are not such a big leap from sewers and i'm still on a bit of a Veins kick. I studied prehistoric rock art and wrote way too much about it so all this inspired me to do this. Mostly they are for decor or curiosity with no game function but villagers might mention them as a scary place or finding one in a deep cave might be a warning. Could describe historic event and you might find remains of a monster depicted in art or find a living descendant.

You might find these in caves but also on cliff faces or anywhere with great sheets of rock. Some might be flooded over by the sea or visible at low tide or on a mountain top.

Some are painted so these require better shelter and or a tradition of repainting them every generation, Carvings last a long time but might be worn smooth in some locations. Relief art is more 3d and statue like but carved into rock work

More modern religions might fear them adding their own on top or destroying them. A wizard might be able to research a spell from them but these will be better hidden. People might assume they were pagan or witch made to be shunned or feared. More recent peoples might open them to tourism and even create fake copies for cheap fame. People might adopt earlier artworks and make up explanations or claim their ancestors made them as part of their land claim.

Many will feature lost prehistoric life being hunted, ancient disasters, ceremonies, communities, supernatural beings, ancestors and more. It is a great chance to show off your world history. Some might be magic but the secrets are probably lost. Some prehistoric maps seem very strange to us and very abstract with distances in days travel to actual distance making them very distorted. Some possible magical instructions or treaties with supernatural beings.

Works might be made by a gender, specialist artists, shamen or wizards, seasonal rites, part of coming of age ritual, just decoration, for magic and possibly by teenagers for totally secular entertainment.

D6 Type
1 Painted with ochre, pigment or blood with brush or sprayed from mouth like aerosol
2 Scratched or scraped surface with tool
3 Chiseled and carved linework into rock with tools
4 Relief carvings with 3d shapes
5 Patterns with clay or mud possibly built into 3d shapes
6 Carved and chiseled then painted

D6 Condition
1 Perfectly preserved since prehistory
2 Well preserved but repaired over aeons possibly added to or distorted by later peoples
3 Not as ancient as you might think, possibly fake or copied mish mash
4 A bit battered or worn or covered or faded
5 Vandalized with possibly modern work over the top like names or holy symbols
6 Worn and barley noticeable requiring study and reconstruction to comprehend