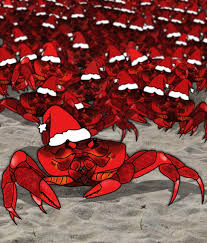 In Gamma Oz the cryptic alliance of the Xmas Dawn found many bunkers decorated with xmas stuff so they recreated the holiday and believe after the next apocalypse the dawn of xmas will start utopia forever in service to Santa. The last apocalypse failed to bring xmas paradise because humans were too naughty. Half the year is prepping in secret and stockpiling, the rest is telling everyone and selling crocks of xmas cheer. Don't mistake them as soft, you cant look that lame and survive. Only those in most decorated bunkers will be saved!

1 Legion of Santa, wandering hobo santas who beg and raise money for poor (possibly themselves). They often congregate and beg but might get surley at the rich or help anyone poor.
2 Heralds of Santa Claws worship a primordial dream being with savage claws and hunts in the woods, the cult live in fear of being eaten, some make feasts with cannibalism and sacrifices
3 Brotherhood of Grumpus is a hideous mutant who punishes non mutants for cruelty to mutants, his cult play pranks on racists often involving faeces and napalm
4 Science Church of Santa, follow the brilliant time travelling scientist Lord Santa who battles despots and guides the human race in secret. How else would he deliver all those gifts?
5 Sons of Santa Brotherhood, a secretive order of assasins who grow herds of mobile semi intelligent hash plants for various uses. At xmas they are decorated and some set loose
6 Cyber Santa a virus cult of machines heavily infected with the xmas cheer virus making them decorate themselves and surroundings for the holidays. These jolly machines try to be friendly and kind but other machines hate them and might come under their influence
7 Santas Elves, make toys from scrap for kids and leave them as gifts. Operate from secret warehouses and and spy on children with spy drones. Many are diminutive from years of toil in cramped sweat shops. Various tribes exist from tiny faerie like mutant folk to horrible morlocks who give dangerous toys and smoked eloi treats
8 Santa's Hunt, santa and a gang of mutant creatures roam woods seeking sinners to torment and pursue to the death. Cults form gangs imitating Santa and his helpers and roam about like vicious vigilantes
9 Givers, donate care packages to needs and practical gifts to survivors. However once a gift is accepted they expect a return gift some day and will hold the recipients moral welfare to be of great personal interest. If they aid someone they discover is in fact too naughty they will try to kill them with traps or snipers or rocket attacks
10 Nutcracker Cult, the nutcracker was a defence borg that battled a race of rat men led by a terrible ten headed king. The cult perform athletic dances to remember this war and paint fighting robots in jolly xmas colours. As cultists incredibly fit they are fearsome martial artists

Uncanny xmas to you all or else!
Posted by Konsumterra at Monday, November 25, 2019