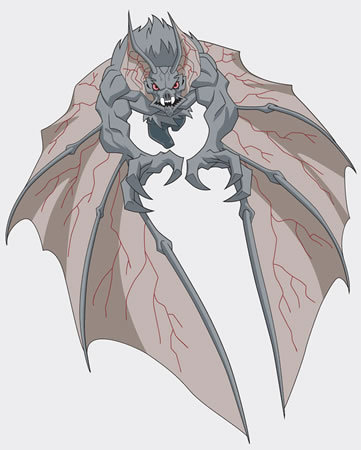 There are two main strains of batmen. The common cave bat men and the more horrible vampire batmen. The former mostly hide from surfave people and are no longer the ancient brites they were. The later are religious worshiping their demon bat vampire queen and sacrificing prisoners on their blood ziggurats. I've accidentally done bats twice so re writing both entries to be more different.

Cave Batmen
People don't realize how many millions of batmen dwell beneath the earth in huge colonies squirming up close. One day they will swarm up and eat everyone. Most batmen cannot fly but can climb and like to hang from ceilings and branches to sleep. Some do have wings but these tend to not use weapons. There are small batmen or batlings who ride giant bats. Such batlings fight goblin batriding tribes. There are also large flightless bats that walk on two legs with huge jaws and claws used as hunting dogs if small ones or mounts if large ones by the batfolk. Bats use any magic and never forgot many vile rituals and disgusting rites.

They became one of the ruling monster races of the olden times for their savagery against the previous insect and worm races, the only mammals in the Monster Empire. At night they still surface but restrain themselves in fear man will destroy them They also creep into the sewers but keep away from contact with man till the time is right and they can blot out the sun forever and eat everybody, even their past allies. They often blind their captives and slaves. Hybrid batfolk cultists are rare and very secretive.


Some degenerate batmen have lost contact with their race and are mere savages now. The flightless ones use climbing and leaping prowess and also make hair ropes for swinging and abseiling. The worship gods of darkness, night, the underworld and even insect and worm gods for food. Some batfolk are less evil and their are tribes happy eating bugs and farming them in caves. Their are black and grey and white furred batfolk in different tribes. The ghost bats are the rarest. Vampire batmen have their own entry. There are ginger fruit eating ones in jungle lands.

Sailors have found islands where every mammal niche has been filled by bats. Many bats also gain mutations from their cults or the people they eat or the strange glowing cave lights of underland. They are poor at communicating with humans and very alien. They do have eyes they just don't need or depend on them but are handy to read non engraved texts. They are impressive climbers and enjoy hanging upside down with their cohorts screeching madly.


d12 Cave Bat Men Troubles
1 A underground stream fed pool keeps washing up heartless terror stricken scratched corpses. As numbers rise and people vanish authorities offer a reward
2 A ancient obsidian dagger for not quite human hands was stolen from a private museum and the owner offers a reward
3 Strange footprints have been found and something is gutting sheep and returning to the local caves
4 A strange monolith with carvings of a bat cult have prompted scholars to investigate a cave mouth depicted on the petroglyphs. Murderhobo veterans are required for their underground survival skills to escort scholars
5  A vigilante has been killing criminals, tearing out their hearts as a warning. The thieves guild offer a reward for any who can identify this masked mad man. Some say it is similar to the prostitute killer a few years ago. Some say he has a secret cave hideout
6 Thousands of bats have taken roost in a old ruin and several people who went to investigate have been found half eaten and brutally murdered
7 A cult have been seen meeting in the bat filled caves by night dragging naked victims with them. The rumours and sightings have increased and authorities are assembling a posse
8 A secret meeting of frog and rat cultists has been raided by the secret police who found they were cooperating on finding a mutual enemy the law was not aware of. A inspector wants to assign adventurers to investigate this hidden menace
9  Goblin bat riders have been seen for years in the area spreading spores of magic mushrooms across the land hoping to initiate the great rot. But recently someone noticed the riders had different ears and trapped one in a net to see. It was a horrible bat creature wearing a loincloth of human leather carrying a scribe set and messenger bats with notepaper of human skin vellum and blood ink. Many attended the public vivisection and examined the artifacts of this unknown civilization. Scholars offer research and exploration grants to learn more
10 A wizard has been using clairaudience to probe dark depths of the earth for sounds. Recently he heard millions of chittering voices in the deep and after a while he realized they were intelligent beings using a unknown language. He wants to send explorers via teleportation or spelunking to investigate
Batmen
11 A orchard community has been plagued by nocturnal fruit theft. In some nearby forest the adorable vegetarian fruitbat me live in tree houses. They may be negotiated with for trade but the humans for the moment are horrified out of fear and ignorance
12 Old farmer Bill has been tormented by night creatures screetching his name from the darkness at night and tormenting him. Whatever the things are they have been killing his dogs and vandalizing his farm every night

Vampire Bat Men
Some batfolk of aristocratic bloodlines of the great vampire bat goddess are also blood drinkers, the most savage and evil of them all. Under the earth they build step pyramids where they perform bloody sacrifices to feed their goddess or she will devour the universe.
Hideous cave dwellers who mostly come out at night. Humans fear them because in ancient times thew were conquerors and part of the great monster empire. They also have links to vampirism with some tribes eating blood and worshiping the vampire bat goddess one of the great underground evils. Her pyramids are found in jungles and hidden places from when her cult murdered thousands to appease her lust. Some go the next step and become supernatural undead vampires and not just blood drinkers. Many worship and mate with demons also and can be found populating the abyss. Some are content eating bugs and some more harmless ones only eat fruit but they don't appear in non tropical areas. You may hear them screeching to spread terror but also for their echo location. Most batmen are now flightless with only some of the greater ones regaining the power of flight or at least gliding. The even have breeds of flightless bat creatures for hunting pets and beasts of burden.

d12 Vampire Bat Men Troubles
1 Batmen raiders by night have been kidnapping people for the rites of their horrid blood goddess. Somewhere nearby a rockslide has opened a cave temple releasing them
2 A blinded madman was found screaming in the bottom of a well bats have been seen swarming into. He claims there is a underground city of horrid batmen plotting to destroy the surface. He is identified as a local lad who vanished decades ago
3  Bloodless corpses have been washing up from the sewers prompting vampire hunters but their usual techniques of finding undead don't seem to be working
4 A scholar has found a manual showing the savage bat men at worship and bloody sacrifice. He has heard rumours of a cave complex and would like to hire escorts to see if the batmen still act out their ancient rites or have degenerated over the aeons
5 A villager has raised a batman since a baby he found and the creature is an asset to the community killing foxes and wolves. Now wild batmen have been coming by night trying to get it to leave and join it's lost family and enter the embrace of their horrible goddess. The bat child would rather live with his human friends
6 Something has moved into the village well and makes horrid screaming noises and stealing sheep
7 A farmer has found a stone lid and opened a strange passage. Now since the seal is broken screeching night demon things have raided every night and simply resealing the hole and burying it has not helped
8 Sewer workers have discovered bloody alien graffiti under the city drainways and many dead rat men. The city sewer clerk has decreed explorers must find the new threats
10 A rural temple of the sun god collapsed into a sinkhole. Rescuers went in to see if they could find the priests but found them all missing. Tunnels indicate the area was undermined and the priests kidnapped
11 Dwarves are looking for adventurers to help them raid the temple cult of the batmen who have kidnapped dwarven children as hostages in their attempt to take over the dwarf mining complex
12 Some explorers found a cave recently under a waterfall with easily a thousand human skeletons, remains of where ancient batmen have discarded their sacrifices for generations. The locals want revenge and are hiring adventurers to clean out the fiends
Posted by Konsumterra at Tuesday, March 20, 2018