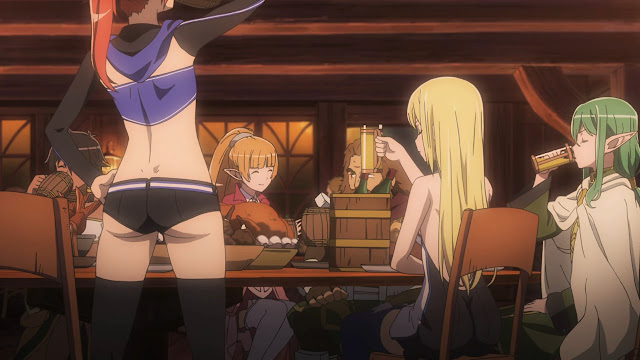 It is a old trope I saw in 80s a few times. In the dungeon there are bars. Where monsters drink and dont fight. My friend went a step further and in every dungeon was a secret sub level where monsters changed costumes, helped wounded monsters with healing potions, rested and had secret barracks and taverns and sold supplies monsters needed including mini healing potions in sugar bottles monsters kept in their mouths to save their lives at the last seconds. Monsters also carried pigs blood in bladders and sponges to fake injuries. I wouldn't go quite that far or use in every dungeon but a madman's ramblings might make players look for such a secret sub complex. But a monster tavern seems an OK idea that should be seen more.

D12 Extra features
1 Gambling tables and games often run by goblins
2 Hobgoblin strippers and prostitutes offering a few hours in heaven for a gp
3 Secret doors to places around dungeon, often a gp toll is charged each
4 Barman sells dungeon maps on the side left by guys who couldn't pay tabs
5 Barber chair with bugbear barber also can perform first aid and remove teeth
6 Magic items for sale, mostly potions and scrolls and occasional cursed sword
7 Private rooms for night 12gp 10x20 foot, soiled sheets extra gp per set
8 Band of musical goblins with bagpipes, accordion, drum, trumpet and violin
9 Second hand adventurers equipment and pawn shop run by old goblin
10 Spyholes where agents of dungeon bos watch patrons and report to level boss
11 Dancing goblins on stage with stockings, dresses and no underwear show every hour
12 A shaman brews up poison and healing potions which take days and has a d4 in stock

D12 Barmen
1 A seedy old and slow moving kobold
2 A feisty grinning goblin who is very enthusiastic
3 A one eyed hobgoblin with a peg leg, a good listener
4 A grumpy bugbear who gets impatient and eats some customers
5 A zombie directed by a goblin necromancer apprentice with a pointy hat
6 A dwarf exile in it for the money who doesn't ask questions
7 A dark elf high on uppers or downers or both
8 A human bandit who is happy here for now
9 A jolly halfling who is happy to serve anyone for money
10 A goatman who has given up serving ungrateful demons
11 A cunning snake man with a lisp who knows lots of rumours
12 A devil swine who charms customers when he needs extra staff

D12 Other Staff
1 Grubby drunken old goblin who collects and washes cups and plates
2 Poltergeist who collects glasses and hurls stuff at troublemakers
3 Zombie dishwasher who is kept in a barrel of brine when not used
4 Surly hobgoblin cook peeling turnips into a pot while smoking pipe
5 Kobold teen sweeping floors and emptying vomit bucket and spittoons
6 Bard drunk kept here working because of huge bar tab for years
7 Imp toiling at cleaning floors, bottles, toilets and unblocks drains
8 Hobgoblin brewer who makes the standard beer who is drunk when not working
9 Dark elf barmaid bound to servitude and cracked onto by patrons for centuries
10 Dark elf  drug dealer offering black lotus, plutonian drug, toads, tobacco, mushrooms, etc
11 Chef on hand with specials of the day, set menu and sometimes a buffet
12 Goblin witch will contact dead friends in underworld or tell fortune

d20 Common Customers d6+6 of each type rolled
1 Orc mercenaries off duty and hoping to get local work
2 Kobold miners who sing and bang cups loudly
3 Dark elf traders preparing to return to the depths
4 Dark dwarf craftsmen looking for work making weapons of war
5 Goblin farmers having a cheap drink before returning to their shroom or turnip farms
6 Hobgoblin labourers short tempered and will fly off handle at slightest imagined insult
7 Hobgoblin soldiers in uniform with hobnail boots having after work drink
8 Bugbears enjoying a feast of meat on a spit celebrating a birthday
9 Sleazy kobolds who acost other patrons for drunken sexual encounters
10 Dark elf priestesses having solemn prayer before meal with familiars
11 Berserkers getting smashed and easily provoked into fighting
12 local bandits wanted on surface and begrudgingly respected by monsters
13 A lone ogre and his hobgoblin followers stuffing their faces
14 Goblin warriors announcing they are great terrors and unbeatable
15 Lady hobgoblins complaining about husbands, some have babies
16 Beast men of various types drinking and telling stories of evil deeds
17 Rival young idealistic adventurer party having a quick drink between killing
18 Horrible veteran murder hobo adventurer party dislike competition
19 Cultists having a beer after a sacrificial ritual and chatting about village life
20 Thieves on loan mission from guild to dungeon boss
Posted by Konsumterra at Tuesday, May 09, 2017