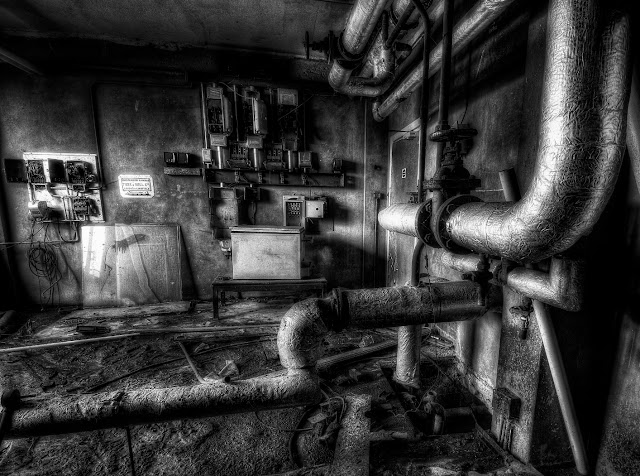 Boiler Room - the basement of torment that went on forever
This is another part of my hell travelogue which is set at a higher danger level than many of my tables here in accordance to my earlier episodes on hell. All praise the lords of hell.

Currently thinking will be a ice hell and possibly a cave hell or a city hell city one could be an addendum to make any city in hell. A jungle of forest hell
Some point when hells finished can work on items like damned in each hell, currencies, food, all sorts of stuff we have in the wings...

Some of my projects are so old Im having to change some names of stuff...
Just to not be confused with someone els or their products

It also could work well with my red brick dungeon stuff because the geomorphs i did would work pretty well for this hell.

Hell's Boilerplate Lands
A endless sprawling complex of industrial workshops, sweatshops, basements, slaughter houses and ruins. Where devils torment damned on industrial scales. Where lost souls wander eternally avoiding tormentors. Where horrors find hidden lairs to tormented souls their own way. Where rooms or torture house devils boiling souls in blood and hundreds of other torments human poets only dream of. Bloodstained rust metal corridors connect chambers and marauding monsters murder and abuse any they find. Souls of chosen madmen killers are permitted to roam free to prey on escaped damned souls. Even devils bound by duty are wary of exploring or chasing a escaped damned soul. Demon bounty hunters and mercenaries are called to hunt escapees to deep in the abandoned complexes.

The damned are brought here for mass slaughter to evolve them into larvae. Some are released with false hope of escape only to be stalked by demons and madmen and monsters forever. Most damned wear hospital like smocks. Some damned are missing limbs, organs and have unclean dressings from surgery. Some damned become ogres, orcs or kobolds and get to be workers or return to earth.

The impression is that it was a once organised industrial complex, the workshop of hell. But over aeons business has been pool, heaven and hell more work together than war and even demons can get working visas to do things devils dont want to. Older devils are too embarrassed to work here or mention it. While still many souls are processed and refined here, much is wasted and chaos seems to be rampant. Ogres and demons and madmen are main examples of chaos. Except ogres never tire or killing and tormenting while orc and kobolds start finding trouble like politics and organizing societies. Demon mercenaries and bounty hunters are used to track down trouble makers or escaped souls when devils too busy and duty bound to wander about taking risks.

Devils sent here are lowest sort or being punished for treason or corruption.


d100 Boiler Room Dressing
01 Fleshy sacks of gore attached to walls or hanging from ceilings where monsters keep stuff
02 Burned bone ash heap with charred skulls
03 Bloody hand prints everywhere even on ceiling
04 Chains hanging from roof ending on chunks of gore on hooks
05 Bloody gibbets welded to walls with gory corpses inside
06 Executioners block with blood exerywhere
07 Rack of horrible blood covered weapons with blades, hooks and spikes
08 Hole in wall at floor level, bones scattered by entry, a hellhound hole
09 A hellcat washing itself from a perch looking for a new friend
10 Net full of human heads hanging from wall
11 Wheelbarrow full of human guts covered in flies
12 Clouds of flies pour through area
13 Smoke smells of charred flesh or coal
14 Cauldron boiling with human fat, candle and soap moulds on bench
15 Huge stove with pots boiling away with human blood and flesh
16 Wrack with flailed human skins freshly flensed
17 A filthy curtain blocks passage
18 A curtain made from human skins blocks passage
19 A throne made from human flesh and bone on a trash plinth
20 Wall covered in hundreds of tiny notes connected by red string by some madman
21 Hundreds of filthy dolls hanging everywhere, many have missing limbs
22 Filthy coat, mask and weapon hanging from wall d4 1=axe 2=machete 3=scissors 4=knife
23 Bloody striped sweater, hat and claw glove found on a chair
24 Hundreds of chairs, many stacked or broken
25 Filthy stained mattresses in stacks
26 Piles of human hair in sacks
27 Room full of artificial limbs
28 Table with tattoo tools
29 Brazier with branding irons smoldering
30 Gurney or stretcher with filthy sheets
31 Small wagon or cart with sacks of badly aged building materials
32 Piles of human teeth, many bloodied
33 Buckets, barrels or tubs with still warm blood left out
34 Walls covered in spikes
35 Floor and ceiling with spikes
36 Chains dangling from roof beams
37 Barbed wire fences inside room or dividing coridoor
38 Coil of metal wire
39 Pile of metal plates and bucket of rivets
40 Pile of 4 inch metal beams
41 Tracks on floor with d4 minecart d4 1=garbage 2=bones 3=rusty cogs 4=bloody skulls
42 Sledge hammer and iron spikes in a bucket
43 Hole in floor to lower level with spades and picks and rubble piles
44 Large oil lamp hanging up high
45 Wooden crates and barrels
46 Corpse with missing limbs in night shirt
47 Something running through pipes in wall heard
48 Person bleeding and dying impaled in elaborate trap
49 Cages hanging from roof with prisoners
50 Corpses impaled on spikes on walls
51 Small furnace for burning corpses and piles of dry bones for fuel
52 Filthy cot with box underneath of ears or other horrid souvenirs
53 Filthy lab with improvised glassware making something horrible
54 Still making hell rum with barrels of water, sugar, strange hellish spices
55 Crates or barrels of booze, mostly addictive wine or rum made in hell
56 Buckets of rusty broken chains, cobs, nuts, bolts and rivets
57 Pile of old pulleys in a iron bucket
58 Room with human carcasses suspended from roof being smoked into ham
59 Huge threatening sign in splattered blood
60 A human corpse with rips spread and all lungs and guts gone
61 Chained to the wall a naked torture victim naked and
62 Area turned into a filthy cramped tavern run by out of work demons
63 Devil selling food an drink from a pushcart
64 Rows of cauldrons with victims chained inside and boiling blood and a devil caretaker
65 Row of iron coffins with creaming damned inside being roasted over fire
66 Wrack with several devils torturing victim
67 Man in locked pit screaming as snakes slowly fill pit from tubes in walls
68 Pits of garbage and pale corpses
69 Kitchen with butchered human on bench and dozens of iron pots and pans
70 Burning screaming victims tied to steaks with devils attending
71 Imp selling bottle of delicious tears
72 Imps playing cards or dice
73 Drunken imp abuses passers by
74 Goat men dancing about altar with struggling sacrifice
75 Heavily pierced ogre butcher chopping up wheelbarrow full of limbs with clever
76 Row of d6 cell doors empty but 1in6 with skeleton
77 Row of cell doors with damned inside, devils come to allocated personal torment daily
78 Extra heavy reinforced door with chains and padlocks
79 Ogres feasting on mugs of blood and human limbs
80 Orc troops parching a prisoner somewhere
81 Door to refrigerated area full of frozen human torsos and possibly a icetoad
82 Orcs making damned fight for the chance to torture the loser
83 Blacksmith one eyed orc making torture implements and chains
84 Kobolds with mops and buckets on patrol
85 Beastmen laying about naked in drugged stupor after a feast
86 Laughter of madman or monster echoes past
87 Pneumatic postal tube rattles as message pod whizzes past
88 Damned whipped by orcs feeding dry human bones into devil faced furnace
89 Huge pile of fingernails and toenails
90 Bucket of eyballs
91 Pumping human heart or brain bubbling in glass and brass canister
92 Bench with scribal station writing contracts on human skin vellum scrolls
93 Preserving jars of human organs on shelf
94 Creepy ginning clown with blood on clothes and his weapon
95 Clown eating from abdominal cavity of human
96 Hell Hound guarding locked door
97 Bronze or iron golem or living statue on guard
98 Crude shrine dedicated to devil made by crazy killer hoping to earn patrons favour
99 Conveyor belt enters some machine through bloody curtain
100 Flayed skin of human nailed to wall (1in6 is someone you know)