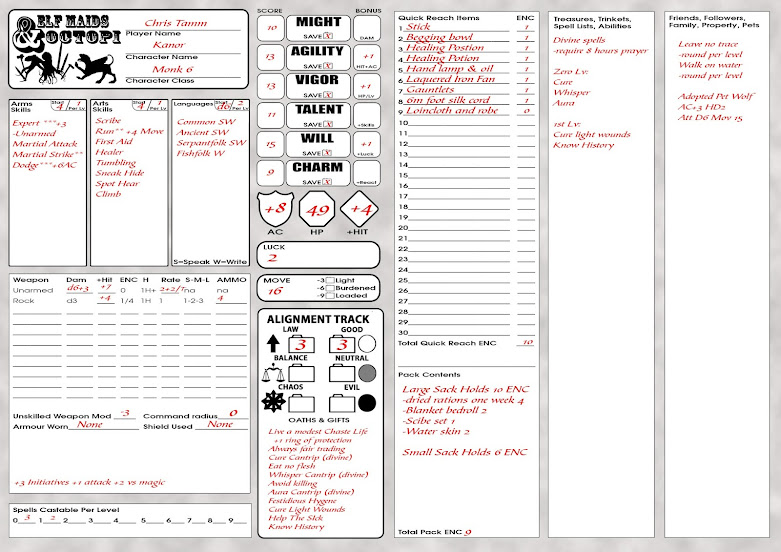 So as I have an alignment system where you may put one point into an alignment per level and take a oath and get a gift. It did result in a TPK in a 20 minute game once which was awesome and players seem willing to restrain from it. Some ignore it but then see some other guy get a +1 sword and say i want me some alignment, fanaticism a small price to pay. Or I really wish I had this thing maybe alignment might let you solve it.

It has also helped make some very diverse characters that break class convention like a sword wielding wizard with a few cure light wounds spells who is painfully moralistic and preaches celibacy outside of marriage. Great guy. All the thieves who became kleptomaniac impulsive graffiti artist who went on to piss off gods. Or that warrior who started getting too lawful and just put on breaks a while with alignment fanaticism.

So I have been revising benefits a bit and decided to put in wishes possible at highest level as gifts and some tweaks to let you stack your magic item gifts for extra minor abilities. One of most interesting discussions was alignment points as magic resistance vs opposite alignments. So you only could have 20 total points in one alignment (Good or Law) or two at 10 (good and law) so to make these scores a few % of magic resistance isn't too world breaking. That good guy with +20 in good would get 20% resist evil spells but that lawful (+10) good (+10) guy would get 20% vs chaotic evil and 10% vs evil or chaos.

Making alignment do stuff in game and have clear guides over behaviour defined by oaths has been good. Some other thoughts on how this links to religion and magic items that might have required alignment scores to activate abilities or resist a curse. Some more options for magic items and

I like way you could select difficulty rating of a dungeon or monster random encounter by level its a shame they didn't rate magic items by level too in older books which would make sense.

Currently you can get a +1 weapon at low level with a oath then a +2 one at 6th level. So this seemingly makes old +1 obsolete and you might throw it away or sell it or give it to a follower. But we considered you could instead upgrade an existing item and unlock another ability. I guess Id do the same for armour but might need a better table but possibly as A +1 ring or armour are stackable in a way attacks are not usually able to do

d12 Swap a redundant "+1" for:
1 Only usable by your alignment other users save or cursed -4 to hit
2 +2 vs a specific species or opposite alignment (so a +2 sword have +4 vs one foe type)
3 Opposite alignment touching weapon to hold or hit takes +d3 fire or electric or cold or venom
4 Thrown misile weapon returns to hand others acting missiles create ammunition
5 Weapon glows within 30 yards of one species or opposite alignment
6 Weapon leaps into your hand as if you had quickraw weapon if within 10 yrds
7 Weapon glows casting light equivalent to lamp can be controlled at will in hand
8 Weapon transforms into a harmless non threatening similar size object at will
9 Weapon is intelligent advising wielder via telepathy, stack twice item can talk
10 Weapon can once fight on own one round per weapons + per day (+2=2rounds)
11 Weapon can cast four cantrips once a day
12 Weapon can cast a 1st level spell once per day

Currently we are making monks to test out weapons skills and martial arts  a bit, writing mid to high level spells and various little tweaks. Working on a new character sheet.
Realised was mixing my nationality spelling of English again so a few things fixed since this.
Possibly could have made this guy a more horrible killing machine but went for thief and healing stuff. A fighter the same would probably hit more often and move slower in armour. These same alignment oaths and gifts could be slapped on a wizard as easily which I like the idea of wrathful LG wizards. I don't really need paladins or rangers in my game, this system lets you make lots of other vanilla classes do strange things.

ENC is a fun time thing mine isn't strictly mass. With this guy a few more things in his pack and he will be -3 on his move of 16 making him faster than unladened normal person.

Though hitting a magic monster bare handed is one thing i realising punching a slime monster or fire elemental or wraith might be really bad outcome maybe monks need threat proof fists or a stick for such occasions. Or a halberd. I gave this guy gauntlets for this. Magic Cestus?

Worked this guy up from 1st level by level to six to test the system. Also being martial artist they tests min maxing and stacking fancy fighting skills which I want. I like some stacking but not as silly as it all got in 3rd ed. Lots of players enjoy this stuff and my last gasp of old and was early 2nd ed with the brown books and my fave later 1st ed books were Dungeoneers Survival Guide and Oriental Adventures so my liking of stat based rolls for skills was big. I liked BRP and Rolemaster and GURPS to and skill systems in general. Skills as a shortcut for getting in game clues is kinda like we roll dice and don't need to punch the DM to run combat in game. They make stats do things unlike some versions of game. I prefer stat based saved and modern target hit rolls and lots of stuff. Im gradually filing off some relics of 70s wargaming and polishing others. I was quite happy to slap the 1st and 2nd and 3rd stuff i liked on top of BX.

At least I am playing a fantasy and clone again. Stone Age Sorcery game coming up and characters are I'm hoping gonna fight some megafauna.....It has taken too long and they are 6th level.
Posted by Konsumterra at Wednesday, July 08, 2020

Email ThisBlogThis!Share to TwitterShare to FacebookShare to Pinterest
Labels: Elfmaids