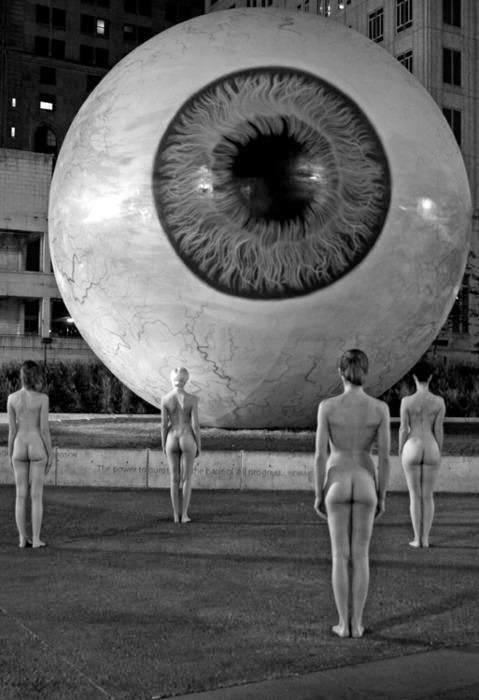 Ive rarely used beholders. Even though i was fond of them the ridiculous numbers of versions of them is over the top for a rare creature. But if mostly customized and one off variety seems workable. Id rather make each unique and not a true species. As I have a low level spell to create flying eyeball spies, beholders id rather be creatures of chaos created with high level spells. A mid range floating eye which fires a single spell fx would be nice too. A friendless, handless bunch of arseholes are not going to have a civilization. More like abandoned pets of wizards with no friends. As i generally use Wikipedia descriptions over official monsters so i made these eyes up for my games. A hat tip to Doom and Warlords PC games too.

AC11 HDd4 MV12" (Flight) ATT:- Morale 1 Neutral
These are spies that float high in dungeon ceilings and keep a look out. The can see in the dark but they dint hear so well. They flee if noticed and are incapable of harming anybody. About a foot wide. They cannot speak but can squeak urgent yes no answers a experienced owner can understand (has Jordie the kobold fallen down a well?). They have no means to where masters are but will report to masters lair, last known position or possibly to known companion of the master. Most are created by a spell. Some are found wild and some are beginner wizard familiars. The are as smart as a typical person. Ideal for scouting a dungeon, watching during a rest, forming a perimeter around a party, finding something in your kingdom. They feed of magical energies ambient to the plane. Five can carry one unburdened wizard bt a bit precarious but looks cool if you practice. Sometimes due to bad instructions you find a few waiting in a dead end or lost. I still use ADnD inches for range 1"=10 foot indoors or yards outdoors.

AC14 HD3 MV12" (Flight) ATT: by spell Morale 7 Nuetral
These more advanced horrors make excellent guards and make good support for your orc guards who fear them. Each has a possible first level spell like effect it can cast based on spells known by caster. These are the most common.

d4
1 Burning Eye Fiend - Burning hands 10 foot cone 1d4+3, save for half damage every second round
2 Shooting Eye Fiend - Fires a d6+1 magic missile per round
3 Sleeping Eye Fiend - spell but only 3 shots then dies
4 Electric Eye Fiend -1d8+3 with a touch but must ram and make attack roll

AC16 HD6 MV12" (Flight) ATT: bite 2d4 or by fireball Morale 9 Chaotic Evil
These are a larger guard beasts but less used as they are stupid, violent and indiscriminate about using powers. They tend to attack anything that come in area even shooting at each other or masters if startled. Scream at each other frequently. They shoot a fireball (4d6 1" wide 6" rage, save for half damage). Some rare variants use cold rays (4d4+4 cone 3" rage, save for half damage)  or lightning bolts (4d6 effects one target 9" rage, save for half damage) but need a different spell. Some distinguish them as infernal eye, storm eyes and frost eyes. Each type is immune to same types attack. Wizards must be careful as while good guards and search destroy monsters their trigger happy nature makes them attack master if surprised. Making them stop once frenzied is very hard. Even wearing a diferent hat or robes confuses them.

AC18 HD10 MV12" (Flight) ATT: 2d4 bite/ram or by spell Morale 9 Lawful Evil
A huge eyeball one and a half yards across. Have clusters of smaller eyes on tentacles or stalks. These are the largest and are geniuses and most difficult to control. They take commands literally and are capable of betrayal and murder. They speak creators language, common and Diabolic. Once they kill a master they are free to do a they please. They also require flesh unlike more basic versions. Once free they find a lair and mostly kill and eat everything they can. They would like to be bullies and in charge but tend to eat vassals and drive rest away. Not very considerate of slaves needs. They will work with lesser eyes but quarrel with own kind, displaying jealousy and paranoia. They can be placated by offering them a crown briefly.

d12 Other features (sacrifice one eye to get one)
1 Claws +2 2d4 arracks
2 Huge jaws 2d6 bite
3 Undead
4 Tentacles 1d4+2 attacks with d4 damage, 1' range and grapple if more than one hits a target in round
5 Breathe water
6 Can turn invisible as spell unless attack or use a eye power
7 Dimension door once per day
8 Displacement field first missile always misses, +2AC and saves vs spells
9 Armour +4 AC
10 Spike covered can ram for 3d4 attack
11 Emit a stinking cloud around self at will
12 +1d4 HD

Eye Wizard Spells
Eight level spell summons one, they cooperate for a time getting a saving throw every day after the first to revolt. They might hang around to betray master at opportune moment. Happy to swear oaths of loyalty with qualifiers ("I will serve you as long as you are my true master"). Every extra eye lord created makes rest get a save to resist creators control. Lots of wizards never get a chance to repeat this spell.

The great Eye God
A wizard tried to summon a greater eye thing once and the huge eye dominated every being with mental control and made them worship it. Only great heroes managed to kill it after ruining a kingdom. Many starved while worshiping or died of exposure as the great eye demanded worshipers go skyclad. Presumably there is a dimension full of magical eyes.

One wizard summoned eye men with great eyeballs for heads. The abhumans were snappy dressers, mostly silent and up to mysterious things. When wizard died the eye men scattered to parts unknown.

Eye creatures with mental powers notably telekinesis and telepathy grow in macrobe colonies, directing giant mindless horrors and spreading colonies. The attach themselves to things and uses servants to move them or TK each other about (dragon mag gamma world moon article).

Alchemists have managed to create eyes also and have put in potion bottles ready to use by smshing them.

Because of the horrors that some eye wizards created their kind were hunted and killed by mobs but their books and scrolls remain.

Posted by Konsumterra at Friday, November 21, 2014