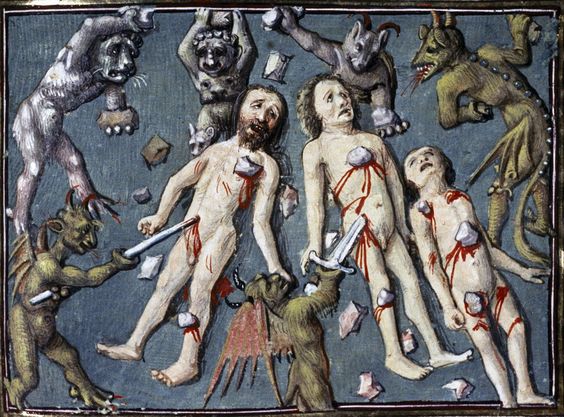 Bloodsand beach in may game for 5 years has been avoided by players who never got within a hex of it. Party have considered but here are some reasons why.

It stinks from 2-4 hexes away worse than a city ten times its size
99% male population, women mostly short lived prostitutes or very old
Whaling, sealing, bone milling and rending fat are traditional industries
Most of population are criminals banished from notoriously horrid Shadelport


The town is on a stony bluff on a sandy beach. It is surrounded by a wooden wall mostly made from wrecked ships. The waters edge wall is covered in barnacles. The southern beach is often used to carve up whales of all types and sealions no longer come near this place. The beach stinks and is stained red and black. Druids hate it even the blood thirstiest ones. Out at sea friendly killer whales await to help the whalers hunt other whales. Many sea creatures brought here are actually chaos warped or evil hell whales or reptilian sea monsters that swarm about monster Island. From the sea there are several entries into wharf filled artificial bays. Several have wooden gates. The largest has a huge chain to block unwelcome entry.

Around the mainland side of the city are fields and cattle pens worked by slaves. Cattle are brought from villages and ship yards to be slaughtered then shipped to Shadelport. Under Blood Beach are caves with Ice Toads who keep everything frozen for shipping. In winter the toads are allowed on the streets after curfew to feed on stray kobolds. The fields grow wheat and oats for porridge and beer. Fishy muck and seaweed are processed by short lived slaves into fertilizer. Sometimes slaves end up used as fertilizer.
There is no sewer. The streets reek of feces and rot. Rats, seagulls, crabs, isopods and giant sea lice crawl the streets. Occasionally giant sea scorpions or trilobites crawl out of the water looking for meat. Fishmen heads are hung near gates as a warning to hybrids trying to enter the town. Most buildings are two stories and many are merged into the outer wall. Inner buildings tend to be sweatshops and work houses where workers are prisoners. There is a temple to the sea god in his cruelest aspect who shield the town from magical destruction by druidry or the reptilian magicians of monster island. The biggest building is the lord mayors four story stone lighthouse, the oldest building dating from the prehuman monster empire. These is a dungeon burrowed into the rock under the tower which is also where the Ice toads keep stored meat frozen. The lord mayor is a ogre, appointed by the Barron. Orcs militia keep the peace and plenty of secret police of the Barron help keep order. Kobolds are common workers and help pick clean the rancid oysters and critters crawling the wharfs. Some lizardmen and frogmen are prisoners here from monster Island. The frogmen tend to die of salt exposure but the lizard men survive better than most.
Nine tenths of the humans are prisoners, exiled from Shadelport. Being exiles from the fabled pirate city, the worst city in the world by many accounts means the people are pretty awful. Most are manacled some are trusted to duties where they get to walk within the town freely. Some humans are administrators employed by the Barony. They tend to be the most vile and corrupt, sent here as punishment. At most the city has 5000. A fifth are orcs, a third kobolds, one in twenty are froglings and lizard folk. Halflings are often visiting but mostly the evil ones with monobrows and pointy teeth. The rest are humans. As Exile Island has humans from across the world especially pirates and the great Empire on the south continent. Recently as Blood Beach is used as a base to raid the prehistoric monster Island many natives from that cursed place have been brought in as slaves but most die of plague before they learn to speak common.

Most humans are male. Women don't live long here. Some elderly ones are managers of sweatshops an healers. Mostly women under 50 are turned or away. Some women have entered in disguise. Some slave women from Monster Island are mistreated and die before they can be shipped out. This is contrary to the Barons Edicts who prefers they be sent to Shadelport as exotic slaves.  There is a rumour the brothels uses girdles of femininity and potions when they run out of real women. Some say they polymorph kobolds. The brothers are kept quiet and are not approved as they waste the lives of the victims. They are profitable mostly for the foreign sea crews with lots of cash. The Barron's code insists women under fifty are held for protective custody then shipped out. Corrupt officials pay good money to make a few disapear.

Fighting pits are the most common entertainment but drugs, beer and other vices are common too.
In recent years the economy has diversified. Raiders to monster Island come here and bring slaves captured there and increasingly including lizard and frog men. Also workers process remains from dungeons stripped by murder hobos, cleaning up old bricks, furniture, wooden fittings like doors and then freighting them to Shadelport. Rubble is dumped along the sea wall and in mounds past the fields in hopes of making a hill for a fort or larger wall.

Laws of Blood Sand Beach on the Front Gate
No women under fifty
No youths less than thirteen years
No druids or elves
No mutants or chaos tainted
No fishmen scum or their bastard spawn
No walking streets after curfew bell toll
Aiding an escape is death
Only the Barron's men may wear metal armour, use pole arms or bows or guns

I will map all this out some time.
Will do d100 street encounters, hazzards and mysteries shortly
Posted by Konsumterra at Saturday, November 05, 2016