d100 Poems and why your bards are lame 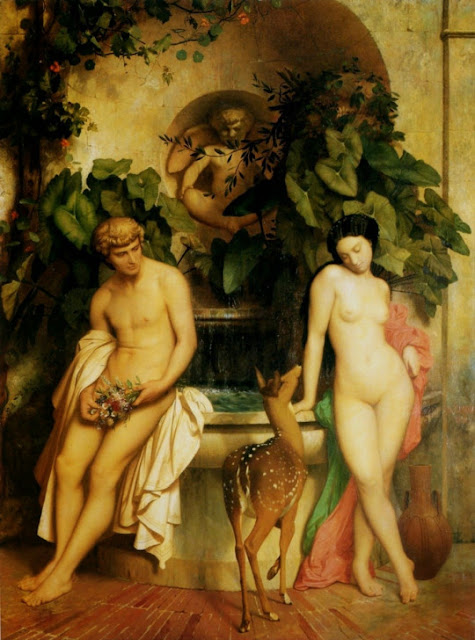 A friend has been using my shadelport theatre tables for a dwarf theatre fan in his dnd game and i was reminded of fun i had with these. Poems are handy for bard performances, to find on scrolls or possible quest subjects or clues.

Poems can be competitive and performers might battle in a genre or extolling useful virtues of a date palm vs a coconut palm. Contests might be in courts or public as entertainment or serious duels with high stakes. Bards in play should battle bards or compose a new popular poem that people want to hear (or steal or copy). Performing from memory a famous poem might be a challenge too. Each poet might recite a stanza. Boasting is popular with some contests, insults are common too. Some contests take turns to compose a original verse with turns to improvise a stanza. A subject might be given by a judge.

Arabic poets have many fomal battle modes - this was a good bit:
al-Nābighah al-Dhubyāni (ca. 535–ca. 604), one of the great court poets of Arabic literature, served as the first judge, and where the seventh-century female poet al-Kansā gained fame for her elegies for her brothers, who had died in battle, and dueled with the likes of Hind Bint ‘Atabah and Hassān Ibn Thābit. When al-Nābighah suggested that she was the best of poets with a uterus, she responded “and of those with testicles as well!”
Anytime great bards or poets meet people will expect a contest. Some will be bitter and shame the loser some will elevate both or produce a collaborative work. Great battles might be the subject of worked by later bards.

Contests light be judged by most important person, most attractive lady, oldest man, greatest scholar, a priest or the mob. If you offend a great poet or cheat them look out, they are vindictive and might curse or lampoon someone who wrongs them.

These might also be subjects of artworks canvas, vases, metalwork or prints. Most frequently they are scrolls or books and quite valuable.

d10 Poetry Types (don't quote me you might fail)
01 Sonnet - love poem which dealt with the lover’s sufferings and hopes
02 Burlesque - treats a serious subject as humor
03 Eulogy - written to praise the deceased
04 Lyric - expresses the personal thoughts and feelings of the poet
05 Ode - A lengthy lyric poem typically of a serious or meditative nature
06 Epic - long and narrative poem that normally tells a story about a hero or an adventure
07 Ballad - tells a story similar to a folk tale or legend
08 Romance - emphasized emotion, nature and individuality
09 Didactic - educational or teaching something posibly concealed as a fable
10 Lampoon - slanderous insulting satire to ruin reputation

d100 Poems
01 The unicorn and the maiden
02 The dagger and the sword
03 The slasher of Vicetown
04 The old gods tears
05 The thief and the manticore
06 The lucky prince
07 The pumpkin head and princess
08 Ode to the chess master
09 The golem of Shadelport
10 The bearded queen
11 Horror of Devil Rock
12 Tiamat's last treasure
13 The terrible witches of Blood Beach
14 The gigolo's curse
15 The crafty cat and the mad wizard
16 Journey into hell
17 Ode of the dawn ages
18 Epic of the overthrow of the monster empire
19 The doom that sunk the city in the sea
20 Jack and the three headed dragon
21 The goose girl and the foolish giants
22 Prince August and the Scarlet Spider god
23 Epitah of the first Emperor
24 Ballad of Bowser the wonder hound
25 Explorers of the lost Island
26 My potions bring the heroes to my court
27 Sage Grundlock and the foolish students
28 The Baron is harsh but fair
29 The story of Gunter and Eleanor
30 The beggar with the huge member
31 The Gardener and the Priestess
32 The seduction of the virgin
33 The Ivory princess her seven consorts
34 Wines of the seven kingdoms
35 The Battle of Castle Black
36 Hunt for the questing beast
37 The loyal manservant and his kind masters love
38 Gnoric in the Harem of the Ice Giants
39 Foolish king Zutan and his seven brides
40 In the court of the monkey king
41 In the court of the Slumbering sea god
42 Songs of the wise ones
43 Torments of Saint Orenzar
44 The maid and the mule
45 The sun and moon's chariot race in the sky
46 Curse of the frogmen
47 The vampires court
48 In the graveyard at night
49 The splendid court of the necromancer king
50 The wise treasurer of the foolish prince
51 Ice palace of the bear queen
52 The fool on the moon
53 Lies of the rat king
54 The five foolish friends and the ferryman
55 The hellhound and the minstrel
56 Whispers from the darkness
57 Blood feast of the demon god
58 Night orgy of the beast gods
59 Swords of the frog prince
60 The Barron in the mushroom kingdom
61 Cry of the ghoul priest
62 Fall of the crystal ziggurat
63 In the Dungeon of the Lich king
64 The mutant, the fool and the fishman
65 The owl king's nephew
66 Seven idiots for seven villagers
67 Black lotus dreams and confessions
68 The shanking of the good kings jester
69 The old beggar and the twenty six virgins
70 Reaper comes for s all
71 Romance of the first empmire
72 Shadelport worst city in the world
73 The cannibal clan under the hill
74 Blood throne of the vampire queen
75 Song of the eye wizards court
76 The elf king is also a queen
77 Fall of the bone forest kingdom
78 Death of the twenty seven foolish bandits
79 The lonely apprentice and the nanny goat
80 King Hragnar against the gods
81 The executioner and the wigmaker
82 The dragon and the cucumber
83 Foolish jack in the pool of the frog men
84 Count Escobar and the Moon Kings daughter
85 The fire giant and the kind bunny
86 Flesh feast for the kingdom of Xor
87 Life in the court of the sea dragon king
88 Beholder love sonnets vol12
89 Lament of the lizard king
90 Rotgrubs killed my brother
91 Saga of the goblin prince
92 Doom in the Hellbog
93 Tale of the werewolf princess
94 Fishman Love sonnets
95 Six score daily duties of the pious peasant
96 Countess Gretchen and the troglodytes
97 Plough Ox loves his master
98 Theres a vampire in my catacomb
99 Last knight of the Doomed king
100 Love out of wedlock angers the gods
Posted by Konsumterra at Wednesday, August 17, 2016