Some optional starts for Psychon 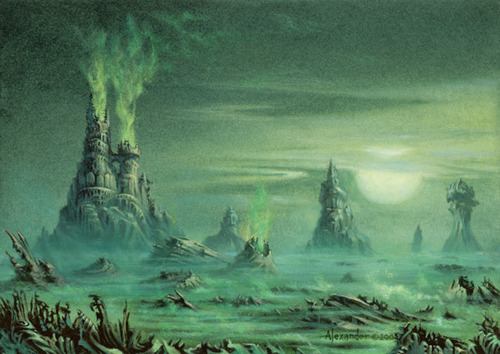 A crew has been sent from a distant colony to lost Earth. Nobody knows what happened on Earth but radio signals are a confused mess and often include encrypted hostile viruses of multiple types. Astra has been shielded and crew trained to explore potentially hazardous enigma of the homeworld.

The dart shaped vessel with mostly frozen crew has been awakening on shifts. One other vessel heading earthward but larger was destroyed two days ago but it was larger and not equipped for stealth. Other anomalies have been detected in system including a ruined asteroid hab was passed on the way in.

Closer in saw Earth bathed in weird auroras and covered in a surreal patchwork of coloured hexes. Strange radio chatter from orbital AIs was heard before systems on board began to be effected despite the ship and its AI: CORKY (Computational Organism for Research Keyed to Yellow clearance hazard) being designed to resist cyber assaults. Theorised nanoid around Earth cloud has attached hostile nanoids to ship for physical breach of defence systems.

Ship is going down, CORKY chosen a wet landing base due to total absence of landing strips on earth. Systems failing, attempting to revive crew as life support tech being disrupted.

Ship lands roughly in sea, calm yellow water with darker green tinge below over blue sand. Land visible. Saw fish and even a trilobite, supposed extinct for millions of years. Colourful seabirds swarm around ship. Many frozen crew dead. Most computer based tech dead or dying. A notable exemption in defencive lasers, stunners and a military laser pistol. Solar recharger, some medical supplies without smart tech. One crewman using an atomic torch/welder has fashioned some crude archaic weapons from the hull metal. Radios mostly non functional except some strange languages chattering. Nobody seems to understand our colonial Anglic or any other language our survivors know. Eventually radio dies. The Astra is taking on water.

Surviving crew take a life raft and head for shore.

Stuff to do:
Survive, get to shore - some high tech survival equipment works
Fight giant sea scorpion, crab or marine dinosaur
Detect a radio anomaly down coast
Find a gigantic sand castle 4 stories high (is it a ruined theme park or something)
If approached a giant crab comes out and attacks
Inside more giant sea creatures guarding an atomic power cell

Will meet hostile humanoids eventually before driven to a new hex while crew one by one fail CON save and become altered to Psychonians.

Its 1973 The band has been on tour in Latin America and heading to Bermuda in a small passenger plane. A weird storm brews up from nowhere tossing the plane badly. The pilot climbs higher trying to get over the storm. The higher the plane climbs the weirder things get. Coloured auroras, sheets of rainbow lightning, teeth and hair feel on edge and passengers panic. A flash of lightning dazzles everyone and storm is gone. The plane is over a strange golden desert with magenta mountains in the distance.  The engines stop and everyone braces for a crash.

The plane tumbles, breaks and everybody in knocked out. When start to awake and count living and injured among smouldering wreck everyone asks where are they.

Stuff to do:
Help injured
Salvage first aid kits, possibly a pistol or two, flare pistol, blankets, water, booze
Find water
Something that looks like water is a killer ooze
A wandering blue skinned ghoul comes first night
Some weird deaths caused by alien creatures should thin survivors
A native red man hunter with stone axe tries to help but nobody understands him
Some passengers are annoying, dangerous and selfish leading to deaths
As group converted hunter can communicate and explains this is a death land
Party move to somewhere safer with real water not killer slime

Languages on Psychon
Most incapable of speaking ancient language due to mindhacking nanites. Some find (when levelling up) new languages spring into their brains complete. Written and spoken learnt separately.

Common
Is standard language used by all written and spoken, most illiterate - all Psychonians speak this

Alignment Languages
Alignment languages used by otherworldly beings mostly know only by wizards, written and spoken. Alignment is imposed by gods - it is not fair and is about starting fights not finishing them.

Ancient Languages
or just Ancient will do for English, mostly only known by magicians or off-worlders, written and spoken.

Eldren, Morlock, Halfmen Languages Have own languages Written and spoken - eloi speak eldren or morlock depending on how long they have been morlock cattle.

Other Monsters
Dragon, ogre, troll and many more available with written being rare

WP or NWP on Psychon
When converted to psychonian may adopt standard fantasy NWP but some "ancient" skills might be kept for colour and amusement like pilot starship. Some psychonian versions might know as computer lore or robot lore for ancient knowledge skills. These would be rare and mostly for magicians. Eotic tech harder to learn once in game world without a teacher of some kind.

A WP in handgun, long arm, heavy weapon, gunnery might be handy to fire some weapons
A NWP in energy weapons or black powder weapons would let you maintain, repair, reload and understand weapons better

My gamma world list Might be useful
http://elfmaidsandoctopi.blogspot.com.au/2012/10/gamma-skills.html
one player wanted a improvise shelter skill that saved party again and again
Posted by Konsumterra at Monday, August 12, 2013