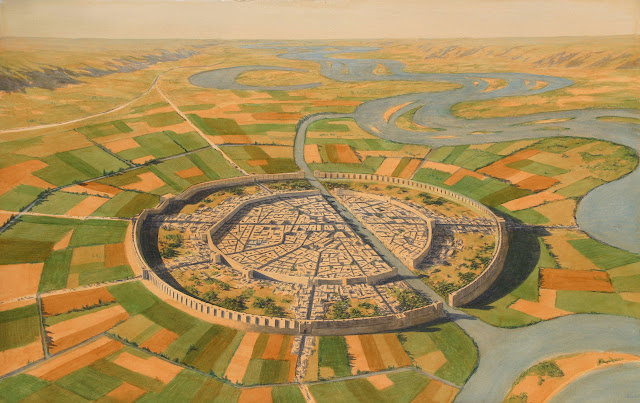 A well fortified city, Mari the western most sumerian style city since 5th milenium. Important trade city, destroyed and rebuilt till finally rivaled Babylon and was an important stepping stone in the Babylonian empire. Dagan, as a of storms, had an entire temple dedicated to him, as did Ishtar, the goddess of fertility, and Shamash the sun god. 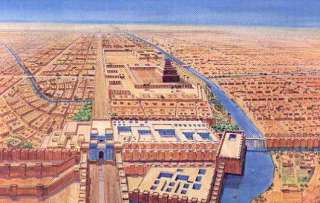 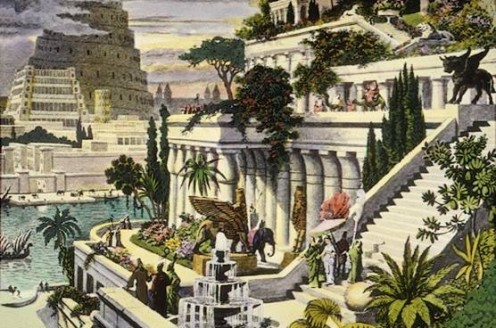 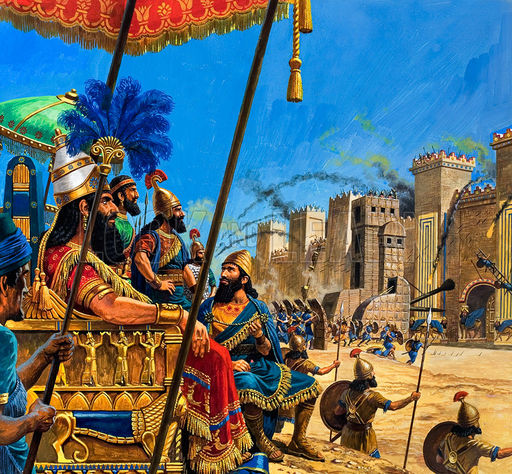 Another city bites the dust while a king looks on. If you surrendered quickly and made a deal your city could be taxed and made a vassal state and a king could get to be a vassal state and perhaps fight later. Their troops would be expected to serve the empite. If you made it expencive to take you horrible public torture, piles of heads, burning bodies, flailed skins nailed to city walls, slavery for all could result. 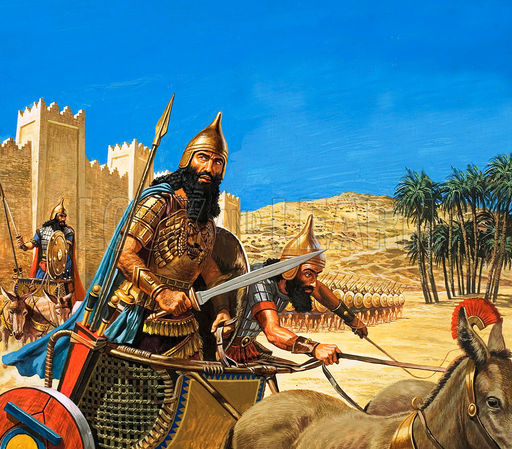 Wild ass chariots rather than horses - onagers were the principle chariot beast after the early ox wagons of sumeria. This chariot is definatly a light war chariot made of whicker and with a classic sumerian style wheel. Image is a bit of a mix of periods but another good one from look and learn magazine site 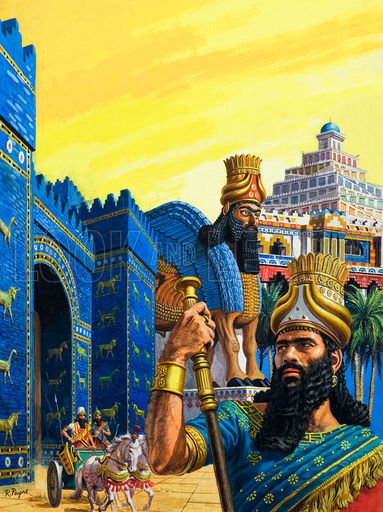 The ancients liked harish colour if they could. Greeks painted all statues and plain white marble horrid colours. Ziggurats were painted with colours to symbolize the strateography of the universe with lower layers as the earth up to the heavens. Kings would get to participate in a ritual marriage with a priestess in the topmost chamber on a festival. 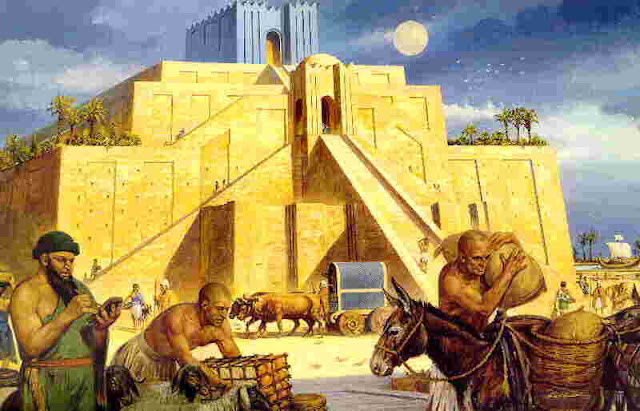 Another shot of Ur the supposed city of Abraham. Sin the moon god rules with his wife and his son Shamash the sun and Ishtar who is Venus. Managed to be influential for millennium. Dates from 3800 BC. Was reputed largest city in world with 65 000 people. I use as classic Sumerian city. Covered wagon in background simular to chariots with the covering tent part removed. 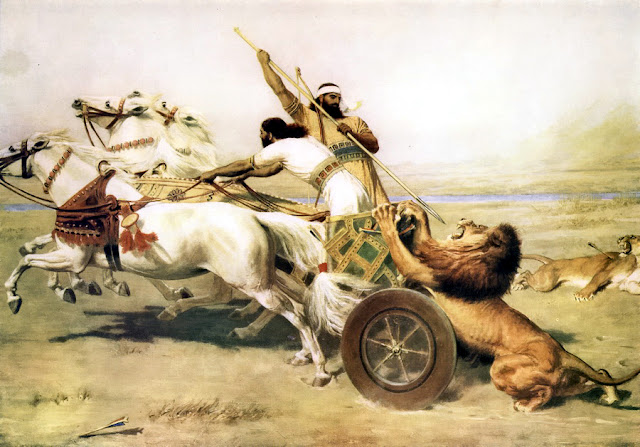 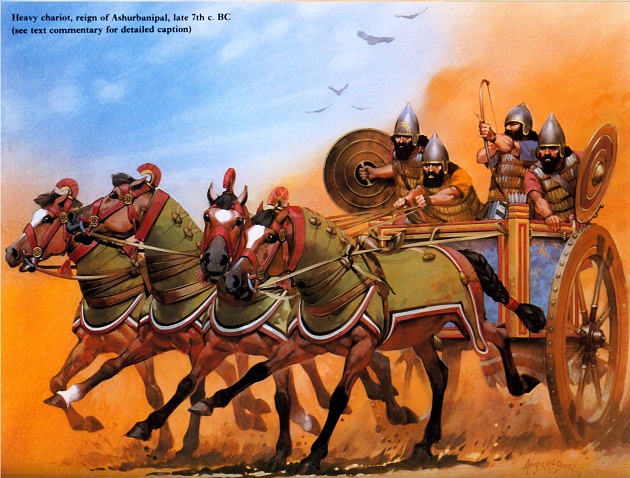 A four horse 4 man chariot with shield specialists protecting the archer. This represents an enormous expence in labour, skilled crafters and money. More wood in the car also. A battlewagon could also drop troops behind enemy ranks. Very effective on broken rank and undiciplined troops or routing units. War dog mastiff handlers good for this too. Chariots carring you too and from a dugeon would be cool. 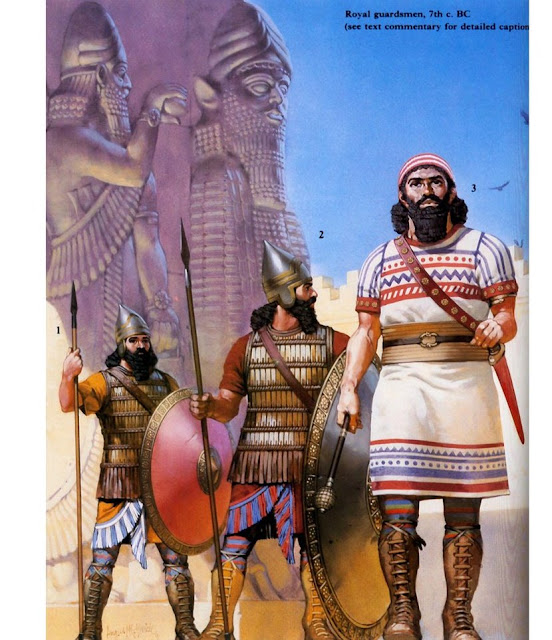 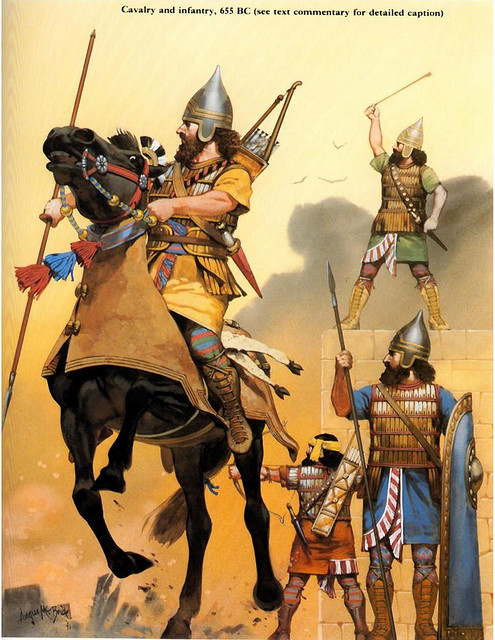 More of a phalanx spearman style here with shield. Cavalry with bow and lance. Slinger is well armoured and has a small sword. Archer by comparison has no helmet and a dagger. Many middle eastern troops are illustrated with bows only 30-40cm with quiver on the belt. More annoying and to be used en mass. These would be a class smaller than typical RPG bow.  Sargon of Akkad was the first semetic dynasty and made the first great empire with mass archery. Sumerians had developed phalanx and walled city in a previous epoch. 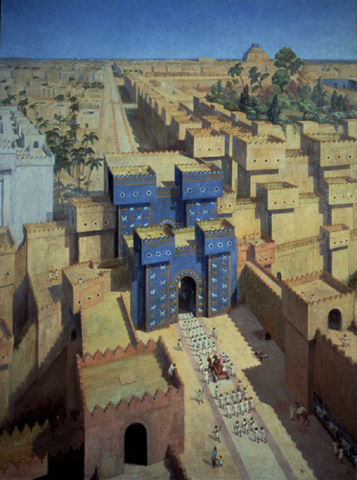 A classic painting of the Ishtar gates of Babylon being used in the procession. Gives good sense of huge city. 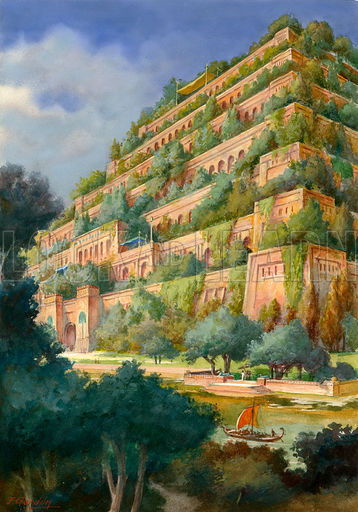 So called hanging gardens  was a later wonder during last flowering of bronze age Mesopotamia. The ziggurats are from earliest times. European druidry kept up with many ideas like astrology and taxonomic lists of flora and fauna for rote learning and basic literacy with occult properties to boot. Stonehenge is less impressive if you consider it was the slowest structure ever built by humans. 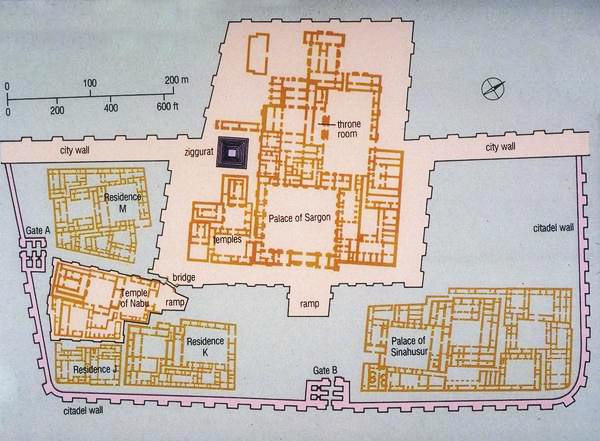 An Assyrian palace. I will post a bunch of building and ruin maps in future. Will get scans from Banister Fletchers awesome architecture book - very useful gamer source book. 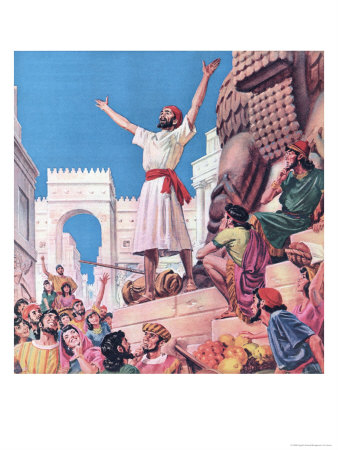 Anyway my hope for all this is for people see as potential gamer setting, or for ideas for a civilization in a fantasy world or as a distant civilization who left ruins and ghosts behind.