Races from beyond the Black Stump 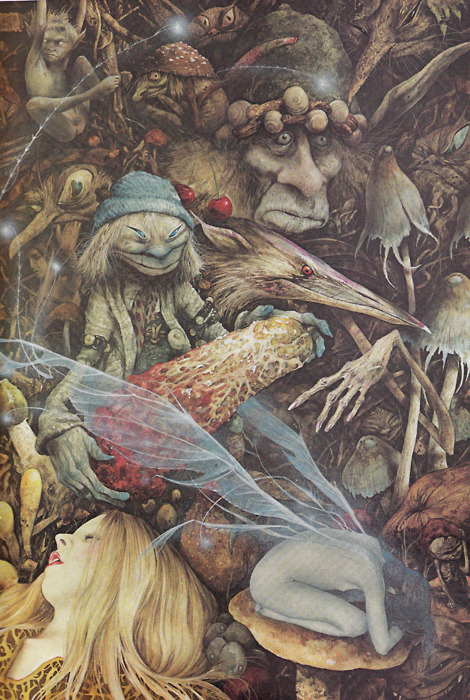 Kobolds and Goblins and Bugbears oh my!

Never seen reverse dungeon but did have Orcs of Thar and had used in play. I figured making races as classes would make humanoids more respected, usable at high level and make them a little less traditional DnD. But I still wanted homage to them. I have also been making my monsters accord with Wikipedia more than the monster manuals. Sorry. I dont really know why. It does make for interesting little folk. These are considered heroes of their race.

Elves and goblins are kinfolk and faerie creatures
Orcs were made from orc and bred with man to create a race of evil soldiers
Dwarves, gnomes, trolls and kobolds are kin

Diminutive folk are mischievous, crafty and cunning. They can also be amusing companions. Dislike big folk intruding on their turf and are resentful of humans. Can be lascivious and sleazy and breed rapidly. They trap locations they want humans gone from like mines but do like wine and can be jolly even friendly if drunk. While diminutive they are magical enough to make enchanted traps, locks and other items. Miners and merchants publish propaganda about how evil kobolds are.

Any one spell list same progression as elf/bard for gaining spells
Any NWP to choose from - often theif, wilderness and even magic skills
Any armour or weapon but only 2h weapons allowed are spears
At first lv you get a normal kobold flunky and 2 more each level
As of 5th lv you get 1d10 extra koboldsevey lv, +100 extra at 10th. +200 at 20th
+4 Sneak, hide, traps, any craft skill
+1 AC from tough skin
-Is -4 to be hit by any bigger than an ogre (8ft+)
+1 to hit with any dagger or short sword
+1 vs gnomes
Night Vision, -2 hit under sunlight
At 5th lv may turn invisible as the basic wizard spell for one round per lv per day
At 10th may turn to animal form of a small variety like a cat or fish or snake
At 15th may choose an extra shape shift species and another at 20th
AT 10th can choose a second racial gift and a third at 20th

Sub Breeds d20
1 - Draconic have a d4 bite instead of punch, +2 AC, +2 resist dragon kin breathe or related attacks
2 - Canine have a d4 bite attack and have a pet dog or replace a kobold follower with a specialty dog
3 - Koboldi are bacchanalian and constantly arroused.+1 HP per level
4 - Knockers specialize in trapping mines +1 hammers, +4 Mineral lore, Mining, Underworld lore
5 - Pale dwellers are albino naked deep dank cave dwellers, +4 Climb, Swim, Run Away
6 - Frostlings live in glaciers and follow winter causing pranks, +4 resist colds, half all cold damage
7 - Yellow are cunning killers who get +4 poison lore and resist poison
8 - Fire Newtlings live in volcanoes or forges +4 resist fire, half all fire damage
9 - Boglings dwell in city sewers, carry infections and parasites but +4 to resist disease or nausea
10 - Ratlings have rodent traits and a d3 bite attack. +4 Climb, resist disease
11 - Sea-kin have +4 boat, swim and ropes NWP help sailors
12 - Redcaps drink blood and can recover 1hp if they drink blood after a fight and get 10 minutes rest
13 - Gliding have a membrane and can glide as far across as high, free NWP of glide based on dex
14 - Weasal kin, +4 any animal skills with weasels small or giant specimens
15 - Frogkin have frog eyes and can +4 jump, Swim, and hold breathe NWP for free
16 - Goatlings have horns and can butt for 1d4 as an unarmed attack woth +1 to hit
17 - Crablings have +2 horny shell and pincer hands on can do 1d4 the other ad3
18 - Barn Dweller likes to live in a barn and help farmers, +4 Plant Lore, Beast Lore, shaggy furred
19 - Raptorlings have 1d4 bite and 1d3 claw hands with a brawling WP, tiny angry dino men
20 - Trollkin have a bit of troll blood and heal a HP every hour but look weedy and hopeless

Ugly greedy humanoids mostly known for evil and tricks. Goblins greed and knowledge of magic can make them obedient and capable servants. Ugly stunted and can form a sub species in one generation if breed in one place for a generation. Infamous at domesticating monstrous animals and cultivation of fungi and potions. They can be fatally curious but this makes them alert guards. Many wicked forces use goblins because of their fecund breeding and easily bribed,

Goblins may sometimes make Wis rolls to resist temptation of gold or knowledge.
Any one spell list same progression as elf/bard for gaining spells
Any NWP to choose from - often theif, wilderness and even magic skills
Any armour or weapon except large sheilds
+2 sneak, hide, herbalist, plant lore, fungi lore, any animal skills
-Is -4 to be hit by any bigger than an ogre (8ft+)
+1 to hit with short bow
Night Vision, -2 hit under sunlight
At 2rd lv you get a goblin retainer and one more per lv
At 3rd ly you get a goblin mount or pet and again at 5th, 7th, 9th etc
At 4th ly you get 12 goblins soldiers
At 5th ly you get 4 hobgoblin bodyguards
At 6th lv you get a bugbear executioner
At 7th lv 2 3rd lv goblin heroes join you
At 8th lv get 12 hobgoblins guards join you
At 9th lv you get 30 goblins
At 10 lv you build a goblin burrow and attract your Charisma in goblins per month
At 15th lv 50 goblins join you, and at 20th lv 100 goblins join you
AT 10th can choose a second racial gift and a third at 20th

Ugly humanoids prone to anger and taking offense from nothing. Like organized conflict and strong leaders. May roam in forest alone but best avoided. Taller, hairier, smellier with bigger horns. Prone to wearing heavy armour and using best weapons. Good laborers and soldiers if controllable.

Hobgoblin Breeds d12
1 - Cave Strangler +2 sneak and hide and all have brawling
2 - Brownie are hard working helpful beings, +4 on a chosen craft
3 - Bogart a hobgoblin bent to practical jokes and trouble, +4 traps
4 - Wood Stalker is a furry wild forest guardian, +2 any plant, animal, skills
5 - Walking Worms are palid with grub like flesh and can eat dirt and all have blind fighting
6 - Army Hobgoblins come with coloured plate, sheild and a halberd and choice of bow
7 - Hulk Horrors are shipwreck dwelling sea hobgoblins that can breath water
8 - Chaos Hobgoblins have a mutation and obvious mutated appearance and patron entity
9 - Crypt Killers are hobgoblins who serve necromancers and resist lv drain with a Con save
10 - Blood Eagles are savage blood crazed hobgoblins, +1 with halberd
11 - Scaled ones +2 AC from hard horny scaly skin
12 - Crag Lords get +4 to climb and ambush from above

Bugbears are huge fearsome hairy goblins with saucer eyes and big ears. They are adept at ambush and sneaking to hunt but also delight in scaring beings just for fun. They eat other humanoids happily. They are fearsome warriors and very nimble for their siz. Adept at craft and war they are able weapon makers. More into interpersonal fighting and scouting skirmishing, or acting as a champion than mass battle. Bugbears only flaw is they delight in scaring a target and give the game up.

Surprise target on 1-3, +4 Sneak and Hide
Night Vision, -2 hit under sunlight
Start as older Pup (1st) then a Youth (2nd) then an adult at (3rd)
+1 Damage all weapons
At 4th ly get a goblin servant
At 5th lv get 2d6 goblins
At 6th lv get 2 bugbears
At 7th lv 12 hobgoblins troopers
At 8th can turn invisible as wizard spell 1 round/lv per day
At 9th get 4d6 goblins
At 10th get get two more bugbears and two more every lv
At 15th you can take over 50 goblins or 100 kobolds or 12 bugbears
At 20th lv you can become invisible as improved invisibility one turn/lv

Bugbear Breeds d12
1 - Black powder brothers like to leave explosive kegs and grenades +4 blackpowder weapons NWP
2 - Iron Lords use 2H studded mauls, maces and clubs, +1 blunt weapons
3 - Tree Fiends live in woods and have +2 Mimic Animal, Traps
4 - Shadow Sons a mystical brotherhood +2 vs illusions and paralasys
5 - Blood Ridge Lodge who all get +1 with polearms and halberds
6 - Chaos Caves Clan all have a starting mutation and patron entity
7 - Skullrock Band all have chainmail, heavy shields and a cold iron mace, +1 with any Mace
8 - Avernus Legion use incendiary weapons and all have oil flasks +4 incendiary weapons NWP
9 - Marsh Band all get +4 Swim
10 - Glacier Gang all +2 save vs any cold effects, furry coats
11 - Cliff gang +4 climb ambush by winding passes and roads
12 - RedRock Band all get +1 with any bow

Orcs were made from elves by evil gods schemes. They are bred with other goblinoids and men to make them light tolerant and more prolific. Evil wizards and gods use them as soldiers who are always willing to destroy life. Some have learned to live with humans and act like them but most are savage killers with a genius to war.

Orcs have same WP available as Warriors and get the benefit of criticals, enhanced criticals and can take weapon specializations without limit.
All orcs know the brawling WP
Night vision thermographic senses in dark, all sight B&W
Ambidextrous equally good L or R hand counts as the NWP

Can pick one or more of these things if you qualify