Demons are the bitter venom of the gods and many work for the gods to punish and curse the wicked. Many demons prey on man in specific ways. Some attack newborns, some children, some the old and infirm. Some cause madness and illness, some spread darkness. Some come to take your soul screaming to the underworld should it not enter willingly. Enlil mated with his daughter Ereshkigal to produce demons in his role as lord of the underworld. She has a throne carried by 7 vampires and many servants and gatekeepers who are minor gods. Many are part of divine order and punish man as bidden by gods. Others are rebels who hate and are jealous of man and seek to kill and harm humans. Enlil sent many demons and plagues and monsters to reduce human kinds noise and trouble. The demonic rocks in the mountains led by Asag, rebelled against the gods once and these were giants and trolls and ogres and goblins in my version. LaPuertaDaIshtar has good demon rules for this world but not in english, sigh.

One man with a siege shield while others use as cover. Assyrians had many specialized troop types. Slingers, archers, javelins. Shields from small bucklers to large round ones you could use in formation like Romans and to cover other misile troops in a siege. Huge siege sheilds to cover several menas above could be deployed. They would build a road to your city and build a siege around you. Wagons and mules and ox sleds could bring parts to build siege weapons. Officers would insect from a chariot.

Off for a Sunday drive in a chariot with parasole holder

Shedu or Lamussu (some sources say latter are female) are winged bulls with human heads who act as guardian spirits. Once again his horned crown indicates his rank. Other beings were ranked by numbers of wing sets. Auroch might be a better description than bull. Such beings are part of the celestial bureaucracy and have magical powers to aid those they protect from harm. They are guardian and tutorary spirits. Also useful for divination (they might act as intermediary with other beings or ask the gods) and keeps gods informed. Also useful for healing as they drive away the host of evil demons who prey on humankind.

Swords are a symbol of leadership, justice and punishment - their main purpose is for decapitation. After a battle pyramids of severed heads would be counted to records. 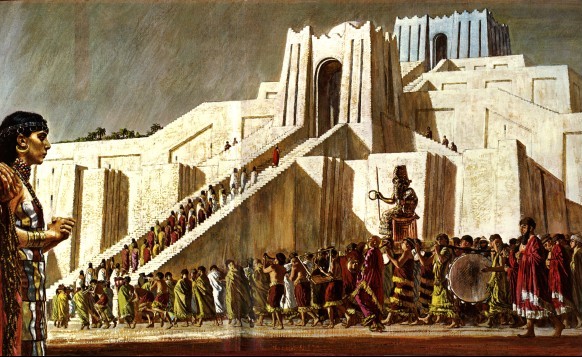 A ritual procession in Ur dedicated to the moon god Sin 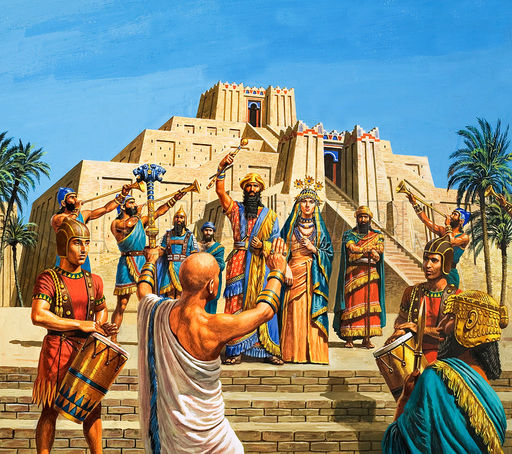 A ritual procession in Ur with the king and queen