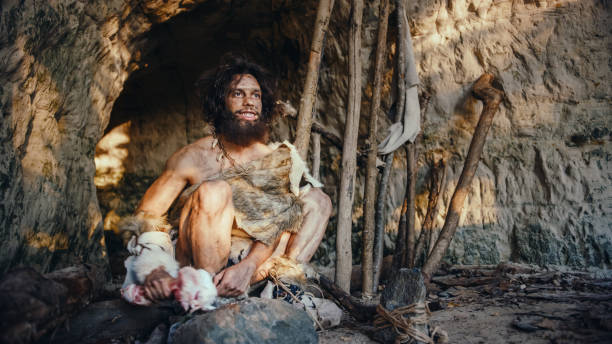 So we had some absentees from the game and an old AWOL player popped back in which was nice. I've been learning to cope with name level player characters after a few years absence and even then most of my games end 12-14th level. I've always preferred low-level play and BRP always feels low level or is at least never stops being risky. Played Dawn of Man a while on PC and very pretty and nice but I'm not sure if it ends and is pretty slow even on the fastest setting so games take days. You could possibly run on screen and work at the same time. My second game advanced faster but I'm not sure If you really win or lose or just pass time. Civilisation2 had a cave mod that had a tech tree with various stone tools and other things on the tech tree. Baskets and knots are pretty underestimated tech when you only care about weapons. Playing Farcry Primal again now my machine working with new boards (wouldn't run with 2 cards so I got a bigger better one) plus I have real internet not my phone so I'm no longer a starving homeless person using my phone for everything. Primal is pretty good though I dread a few later weapons when they had plenty of real stuff to work with.

So I have in my sandbox-style players have had three choices kicking around a while.

And once again they went back to Red Ape Valley and wiped out most everything and plan to colonise it. Possibly the tribe sky cult might adopt the Ziggurat. So as Larnos the giant changed class he technically is not named level he has a cave in Red Ape valley with a healing fountain and a huge pack of dogs he can talk with. Sourberry known mostly as "The Elf" has been knighted by Elf nobility who dislikes him immensely for being some kind of chaos clown trickster leading young elves astray has been awarded the local elf hidden hillfort. He is busy glassblowing an alchemy lab. So they caught up with Orko the greatest living human wizard in the human world who has been living in the lost dino valley with a Pterodactyl barbarian and lizard monks (was 3rd Lv when last played now 10th).

One advantage of lots of old-style adventures is the level guidelines are blurry and fairness and balancing are scoffworthy only. So I'm impressed I ran the first half the Dyson adventure as a Solo but worked fine with a few extra players for the hard bits. There were two moments in the Ziggurat of the morning lord I thought might be a TPK. Also, nobody has much healing or even first aid at the moment. As party name level they seem happy to have followers do stuff like mind homes.

So when Orko returned to the mountain tribes cave he was awed to see numbers up, gardens, wooden walls, fruit trees, and earthworks made by druids. Also noted several tribe members riding griffons and talking to them. So they looked at the list of problems and decided Red Ape Valley was the place to visit. Largos the giant showed of his cave and dogs before they climbed up the cliff that split the valley and went to the Ziggurat. Red apes fled them which pleased everyone after the beating Largos gave them when he moved in with his dogs.

So into the complex which I will skim details as you should play it but the best moment was when they activated a magic trap twice so I was pleased to trap them with two firewalls and two summoned invisible horrors which pleased me greatly. Not really supposed to happen but good to see players mess up a magic trap so badly. Anyway, luckily Orko the magnificent had magic visibility dust making the battle not so bad.

The last area in the valley had a cave with ogres, ogre magi, red apes, white apes, and a succubus had been breeding. The party had gleaned some forbidden woman and monsters were there but over the last thousand years hybridizing got worse.

One great moment when at a fork Lagos asked his dog which way smelled best. The dog took a big whiff and the equivalent of a sanity loss and blubbed bad men eating and killing friends! So they ran immediately to see a grizzly band of ogres killing and eating halflings and saved two. Then went through a secret door and an ogre-magi blasted them all with a freeze way. Orko fled badly wounded. The elf hid behind the giant. The big dire wolf size dog ran away. They blasted the ogre magi with spells and chased it but it turned to mist and went through a door. They hesitated a bit then charged only to have the Giant charmed by the succubus and the ogre. The elf had turned invisible and positioned himself and fireballed the boss monsters and Orko scared of the giant did the same vapourising the monsters and nullifying the spell in time. So the party saved by a 2nd level spell again.

Was big fun and the valley mostly cleared up now of trouble and some of the tribe plan to colonise the place. The sky cult will probably adopt the Ziggurat former home of the apes. The elf also used charm monster to tame the succubi pet otyg which they settled in a pit for the community sewerage and composting facility (well a pit really). Elf made some secret tunnels connecting his fort to the pit then the cave systems below the tribe. Orko met the ogress and saw the cave cathedral covered in mystic scrawls of ancient wizards. Being the most powerful wizard in the land pretty easy when he might be the only wizard in the land. The other characters have shown him lots of ancient scrawls and sites he might exploit.

So hoping they can finish those centaurs (griffons are keen) and then take on those giants.

I have a full colour cover sitting for the next revision of my stone age sorcery book. Might add some extra blog posts, tribes data, a city of the old ones, weapons, monsters, and more to next version. All minis below set to 1/72md. Helps lots mostly for marching order and location in a fight. I had to make fireball templates in-game as so many flying about. 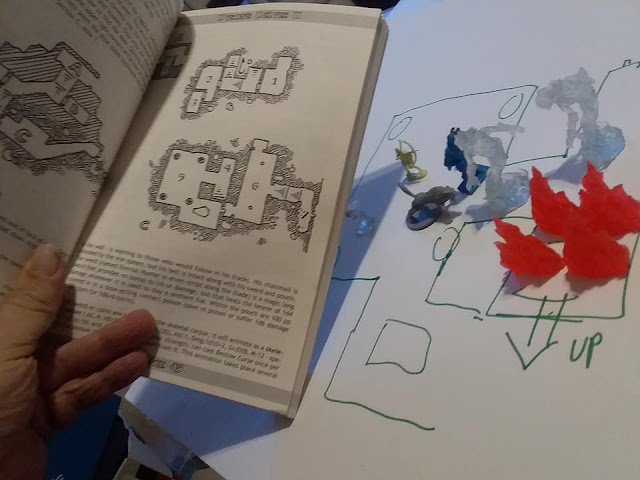 This if the firewall trap going off which party sprung when elf's sprite follower was unanointed came in while they were meddling with both trigger gems. DOH! 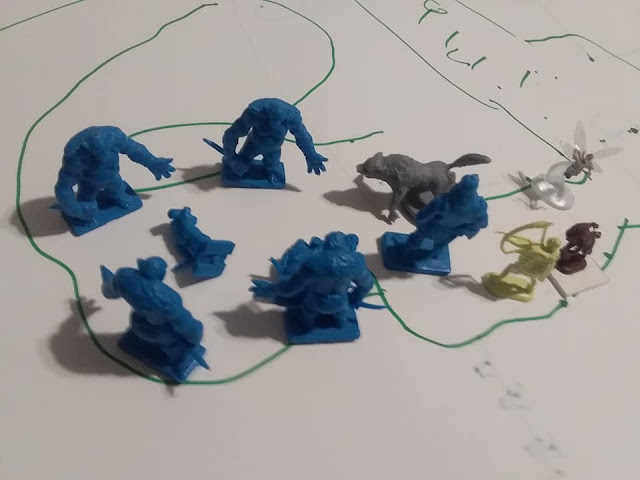 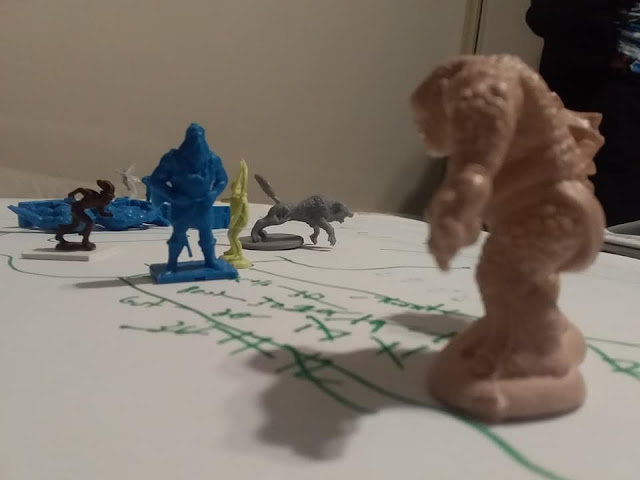 Posted by Konsumterra at Thursday, September 17, 2020