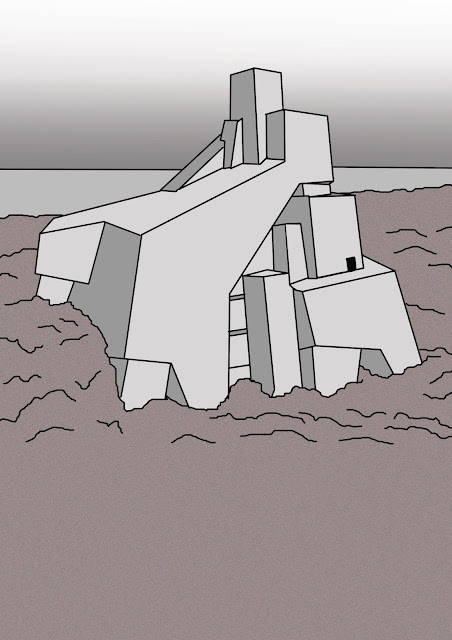 Stone age sorcery game had cave heroes flying recon using magic and animal form and mutations has explored a region. In an area based on Strange Aeons 2 for Call of Cthulhu. So I'm minimising spoilers from products. Possibly the no money in setting and oaths and community of tribe has minimised Stoneage murder hobos stuff. I made this throw up pic from a sandcastle in a few minutes.

Heroes saw missing villagers and other tribes controlled by ghosts and the heroes killed the unwitting cult leader, his followers and a minion of the toad god Tsath-Og-Tha. The battle destroyed a ziggurat and used wizardry triggered floods and stampedes ruin the heretic ghost cult dwellings. Drove them away from the prehistoric empire's ghosts.

Decided to put off fighting the Frost Giants and went home to check on village. Elf had elf followers he wanted to gather and the giant had pet dogs left in his magic cave in Red Ape Valley (Dysons 2nd Map book on LuLu). Helped the refugees home befriending the Elk tribe and convinced some more Snake trike to join the Four-Law tribe. The tribe now has a sky-solar law cult, a darkness ogre goddess, a spider goddess and a snake cult plus some leave out offerings for elves and gnomes. Elf who now has mutant translucent bug wings and a sprite hero sidekick has been stalking lone griffons charming them and bringing them back home to tame and got a pair for him and their warrior ally.

Three months later Elf and the Giant plus followers went into Red Ape Valley and battled shoggoths and had the complex buried to seal a pulsating chaos gate that monsters from three corrupted planes to come here for the food. So killed everything and roasted all the cult gore pits and battled undead trogs a such which kept gating in for food that was ash. Got village occupants to burry the hill as the gate thing was a problem.

Experimented with magical buff relics and the chaos elf flipped a coin and wondered if use use followers to try the random chaos effects as the ods were one or two would get only benefits. After days of the study concluded elves would just use the + to encounter mods as that had best odds. Killed lots of monsters but ended up just sealing the gate room and leaving a boulder on the entrance.

Still, a cave and a ziggurat to search and the party levelled up. Elf gained teleport spell and went off on camping trip a days ride by griffon for a day then learned the spots as teleport spots for the future. So later could hop through known spots and fly over huge areas. The giant is 8 foot 9 inches now but has become a warrior to avoid more growth. Has convinced party he can help them seize a giant sky castle they can fly about in or move the village into the sky forever.

Last HD for most party name level next. I've been hothousing them to test rules at higher levels and break the system a bit.

The giant learned to speak griffon. A warrior might learn to ride griffon. I love griffons a bit too much I'm wary I will show them too much mercy. Sprite and griffon follower for elf has been cool. Giant has had no1 dog grown to pony size like a boss warg other like a huge wolf hunting dogs Giant has introduced shield use to everyone too. Elf and giant squabbling over law vs chaos and primordial history has been good. The humans scaping ghosts have been influenced by dreams of ancient civilisation adding to the influence over tundra the party have made.