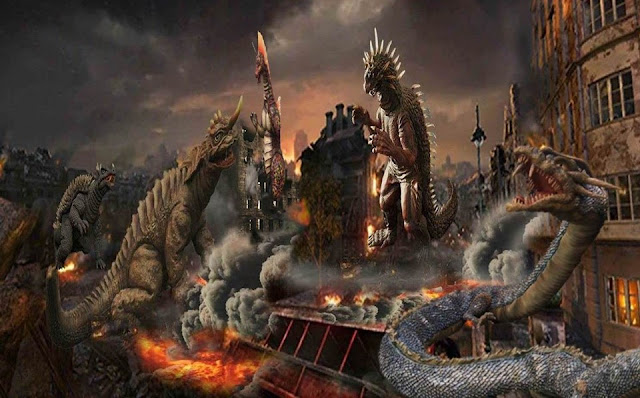 So early session artist friend Cameron turned up to play - had not played dnd since highschool and new lots of tropes as they came up in a doodle recall drawing games over years for some reason.

Cyclops thief with big lips, jet skin and sour flavour with a spherical drone pet
Mutant hungry hero so bizzarre now nobody quite can imagine what he looks like
Horned pink thief with icecream flavour on mission from god of betrayal
Armoured warrior with a halberd and sonic riot cannon

While waiting for comrades in the party's shop in settled town met a prospector who offered a lead to a locked building to pay off his armour repair bill. So they marched down to the ruins, chased off some dingos and faced a giant tangerine and cyan striped winged bearded dragon (australian lizard not the dnd kind). It had a spicy chilli flavour and the party butchered it to make kitchen spices and leather as they did most life they met.

Found duralloy shutters and could read sighn of a tube station. The prospector went back to shop to tell any other party members who arrived what gang up to.

As descended heard some music and found video games and found vending machines they opened for coins. Found intact power room but left it and looted some shops for food and went down to the train level where music increased. Drone scouted ahead to see undead techno hippies raving on trains as they had for possibly hundreds of years powering their lights and ghetto blaster.

Horned thief Jericho went out to get their attention and the undead screamed and charged. He acrobaticly jumped on top of train drawing half to try and scrabble up while he danced about. Rest of party backed into stairs and began the fight as they identified the 15 dead as juju zombies which made them panic.

The tunnel stairs proved to be a meat grinder and the guys eventually pushed through back to the platform where Jericho was still dancing about till a zombie got up and chased him then a second. The cyclops jumped up and slipped drawing one of the zombies to attack him. Eventually they won with thanks to the increadibly good armour of the mutant and the warrior but even he was down to 3HP. So they looted lots of baggage for food, drugs, clothes then restored power. Used a toy printing vending machine to make a cool looking ray gun to intimidate people but had no batteries of course. Left music on as it had obviously kept people away for a long time and played with some addictive videogames and set up a electric fence. Over a few weeks got rest of party in to set up as a forward base in ruins and could drive their tracked car from town and into the shutters. Repurposed and fixed a florist shop robot and a "sarge" recruitment bot and a policeman desk sarge bot from a previous adventure as Jericho had become quite the robo hacker.

So rest of players arrived.

A priest of the god of betrayal
A green furry gnome who comes accross as a druid but more into arcane magic
A gun toting wizards specializing in summoning with his mini clone and snake companion
A new black and yellow skinned eldren with backward knees and huge feet, a member of the silver city rangers, a much loved vigelante group with his laser and machine interface spherical drone

The cyclops rogue went home to look after his kids

Full party agreed the rail tunnels were more interesting than some pleasure bunker and hoped to find a tunnel entrance to their base in town so wanted to clear out tunnels. Began the march with the sneaking gnome and Jericho up front with the com drone.

Found a a machine head workers depot where gang was searching for scerap to fix vehicles and party mostly massacred all but one then sealed the manhole entry and cut off the ladder. Found lots of tools, scrap and a biodiesel generator the prisoner explained they turned corpses into fuel.

Moved south and found a junction. West way had a train wreck the gnome scouted and looted, the east had a metal high tech barricade and gate with gun ports which they were wary of. South the drone spotted glowing ghouls and the party found a ruined station haunted by ghouls which the evil priest controlled and sent to the barricade. Found a second bunch of rail worker ghouls the party evil priest turned on each other for fun and the wizards grumbled about the morality. Mostly full of scrap and some medical vending machines they hoped to claim later.

Back to the metal barrier the gnome turned into a bat and scouted the area and saw millitary androids with ray guns guarding the barrier and beyond that worker androids supervised by a thinker at a pristine station.Jericho aproached hands up despite nobody had heard of friendly wild androids. They lasered him badly and he realised he could die and fled while the wizard summoned albino wallabies to provide cover. Several wallabies exploded or turned to ash and the party decided to come back later.

Finally down south they found a mutant colony in the station closest to their town home. The warrior declared the mutants yield in the name of the warlord and mutants fled for their lives. Found a green translucent baby and fed it some mutagen babyfood parents were preparing and it grew a reptilian tail. Several tried to charm the crying baby but the jolly evil priest did the best job which upset the good wizard who didn't trust the priest of a betrayer god.

Found mutant art and idols and glowing rocks and Jericho was exposed when checking out the plant room full of glowing molten fuel cells. The party made it to the surface and saw last few mutants flee. The station entrance was well hidden but as several party members got new mutations the locations didn't really seem worth it

Went back to town of the warlord and went through the gate mutant beggars hung around and gave the baby to a frog headed antlered shaman who know the family and accepted party peace offering. Sold some loot and rested then back to their own ruin station base to plan assault on the androids.

Gnome invisibly planted a bomb by the gate and then cast invisibility again to flee. After the blast the gnome and the wizard summoned waves of poor mutant Australian animals who were exploded by lasers till the androids ray batteries dead. Heroes poured in and killed them but it was a slog and the androids were very good martial artists. They were joined by their fabulous dress wearing mutant priest friend who helped out with some healing.

Scouting ahead the workers were welding themselves inside the station and two military androids were in train cabin with hard cover. Wizard summoned animals into the cabin with them and the party charged in using the captured lasers with batteries from their stun guns they had captured earlier. Jericho got on train roof and when the front of train and cover mostly destroyed and one android dead, he jumped in and grabbed it's laser. Halberdier warrior got a few laser hits too and magic missiles helped.

Cut open station doors and killed through workers with crowbars to find the brain and warrior committing suicide (game time out). All celebrated the hard won battle and now they were running about with lasers and a vehicle they felt like big deals in the warlords domain.

Im back to Adelaide in few days. Spending few days with a new friend before i go and one last day of work. Started buying clothes and records as have most of my gaming want list killed. Also got all the oriental adventures box set and modules and gaslands coming soon.

Hopefully back in boring Adelaide my blogging and new game work will be forthcoming.
Posted by Konsumterra at Sunday, October 13, 2019