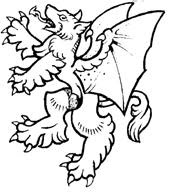 Life treating me well. Just passed a assessment for NSW work permit and working, actually gaming and having a social life so blogging a bit slow. Thankfully monsters are easy.

Patreon has 4 zine items a month at present for a buck.
Gaming was only income last 2 months about 1/4 of welfare benefit i used to received

Im thinking these dragon hybrids make good warm up to real dragons which in my game will be beefed up quite a bit as I have mostly been reluctant to ever use dragons. As players will use one shot items and every spell and dirty trick when they see a dragon, they rarely lasted more than a few rounds. Longest monster fight in one of my games was a invisible stalker.

Gamelyon
Supernatural animal N Morale 11
AC +7
HD 9
Mov 15 ground 12 fly
Bite 2d6 Clawx2 2d4 or Wing Buffet d6
Gamelyon is a lion dragon hybrid famed for ferocity and violence. How these creatures breed is a subject of strange bestiary stories but many descend from times when many creatures hybridised and vocationally a throwback to ancient times is born to a lioness. The area they live in often has scratch marks on walls, find remains of kills and you can hear them raging in the distance. If one is near a human settlement they will embark on a killing spree until humans leave or someone kills the beast. Under their fur are scales with the colour of their draconic bloodline. They often live in caves or dig a burrow. Evil champions have been know to use them as mounts. Some can be tamed if beaten, captured and treated well.

Often attack by ambush especially flying attack in a location of their choice. While their presence is obvious they easily sense armoured opponents stalking them and will prepare a fight on their terms. While mostly not able to speak they are very cunning in battle. They ambush on a 3in6 and are surprised on a 1in6.

Many possess various draconic abilities but the breath weapon is the most feared. They vary in effect depending on the dragon type but most have a 3 range 30 degree cone inflicting damage equal to their current HP three times a day.
1in6 90 degree breath weapon
1in6 range 6 breath weapon
1in6 have stunted wings and can only hop 3 range once a round
1in6 can go beserk
1in6 have alignment of dragon type they are kin to
1in6 half damage of same type breath weapon on them
1in6 sense invisibility 6 range
1in6 heal 1hp per hour
1in6 have a "hoard" mostly consisting of animal corpses but with some treasure
1in6 have a breath weapon that does 4d6 but can only be used every three rounds
1in12 can polymorph self often into a human form or a lion or a dragon
1in12 can speak crudely and 1in6 of those may cast spells as a d3+2 lv caster
1in12 have blood of more than one dragon type with resistances and breath accordingly
1in12 require a magical or +1 or better weapon to hit

Gamelyon Adventures
1 A lion has been menacing lone travellers and cattle and a village needs help, they have not seen beast just the remains it leaves behind and roars
2 A evil wizard and his pet gamelyon have kidnapped the most attractive youths of the area and imprisoned them in their tower
3 A druid has declared forest out of bounds for locals and has bred a gamelyon to protect it but the beast is killing everything and starting fire
4 A intelligent gamelyon lives under a bridge and demands all precious metal and gems to be sacrificed to it's treasure heap to cross. Sometimes it gets hungry too
5 A gamelyon has been killing wizards and robbing their books so local wizards offer a reward of magic items to stop it. The beast can speak and is learning magic
6 A dragon in human form offers adventurers a reward to kill several gamelyons in area, actually it's own spawn. The dragon knows will cause unwanted attention to it's own lair area
7 A gamelyon has driven goblins from the hills into civilised lands and locals are sick of goblins begging and stealing crops. The goblins will go home if nothing is eating them but possibly they could be helped by other means
8 Hunters report some beast has scared all the game away and as stories spread the local noble offers a reward to kill whatever beast is responsible
9 A red and white  dragon blooded gamelyon are fighting in the hills every night and nobody can sleep
10 A gamelyon guards a holy spring and only those who defeat it are worthy to sip it's waters which will after fade to fairyland forever

Posted by Konsumterra at Tuesday, October 01, 2019