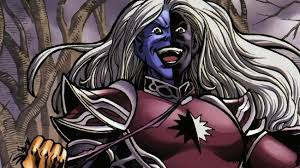 Half races in Games?
Helter Skelter in the Dungeon?Never been a fan really of 1/2 orcs and 1/2 elves
Im fine with orcs as a core race
Never used half elves
(Though tieflings or planar races less so for some reason)

Also seeing rewrites of lore trying to make make them less rapey is increasingly bizarre. I also have had kids of mixed parents show me passages in dnd5 sections on half elves and cringed at the text that i know is a bunch of cliches that people of various ancestry have dealt with and i could not use in gov or uni policy or essays. If it was a cliche I had to help quash dealing with aboriginal art in 91 it seems really dated now. To a outsider being lost between 2 worlds might be edgy but if you are really in that stereotype and people use it to explain your every action it can be less fun.

The amount of american SF and fantasy with hybrid non humans is kinda bizarre. Star Trek (at least has a reason) V series and others have used this but less common in other traditions like brit stuff. The other cliche is half breed is some kind of messiah. In LOTR there were only a few half elves ever and gods intervened to make them. Lots of race notion tropes in fantasy go back to victorian race theory and nationalism which we ought to be aware of and get over.

Race in gaming is problematic enough. Less trouble with notion of species especially with dragonborn and stuff and making them genetically incompatible Im fine with. Im fine with a demihuman having some human blood or a human with some orc blood but i don't need to create a half race. If they are easily cross bred with no ill effects they may as well all be the same. If like mules they could produce infertile off spring or other complications or children rare it would imply species close but not 100% compatible. I have a elfish/faerie mutation table for this sort of problem. Some beaver types have different numbers of chromosomes and offspring experiment seem mostly cruel disasters and people kept trying.

I think we can do better and more interesting things.
But that's just my opinion....

One version of Tieflings (older ed of dnd 3rd?) made them remnants of a empire that bred with planar beings for power willingly which isnt so bad an idea or at least gives option not based on deciet or force.  I'm all for elemental bloodlines too. Im pretty sure wizards would shag lots of alien beings. Elves or devils breeding with mortals to create a earthborn strain not prone to banishing or summoning or the stars being right is ok too. A religion breeding with planar beings might work too. Rape is best not mentioned often in games for lots of good reasons or at least needs alternatives. My parents did it just to be evil is a bit lame.

In my bx clone you can change class that includes species if you can justify it in drama. In my psychon setting race and gender changes are normal in background tables. In my grittier fantasy setting a dwarf might not be impressed if you used to be human but there are precedents and stuff like this over all has helped these species survive. Perhaps humans trapped in a mine or who fled underground might be aided by a god and turned into dwarfs. Perhaps those buried ancients in burial mound reincarnated as elves and all local elves began like that. You could make all demi humans even closer to human and just let them have a few cosmetic changes and forget racial plusses. I guess some humans might vary on average because of cultural living. Perhaps barbarians are tougher because they survived and those sissy city dwellers with posh manners and lazy living seem more charming and weaker. I tend to think nature and nurture have roles to play but any population of humans should have variations and don't really need racial stats.

If you want to have elf ancestors in your background that's fine but i wont give you stat points for it and you can have attributes of either lineage. I prefer term species and to make them more non human. I'm pretty sure orcs should be just that not that their evil parents had them just to be evil. A bit more detail in this lame way of avoiding lack of consent would be better. How about humans and orcs in places lived along side each other and over generations intermarried without thought and some kids more orkish or more human but they don't really care or mark this as significant.

I can see temptation to make your humans vary with mechanical differences and I have done it but it interests me less. Im not really sure if all frenchies have extra charisma or germans extra con it starts to smack of ww2 race theory. Do the differences even amount to more than a few percent? We killed off lower stats for women with good reasons. A lizard humanoid i would be more convinced might have different stats but I have mostly removed all stat mods in character generation (i have giants that get extra STR points and grow a d12 inches a lv and often change class when they have trouble with doors.
Often in history nobles would change ethnicity while commoners might have much older local bloodlines. What were thought to be great race migrations turned out to be military aristocrats turning up and taking over. In cities of ancient near east this might happen every three generations. Barbarians defeat the city softies and take over. They decide being fancy kings and nice clothes and palaces are ok. Their kids become literate and their grandkids get replaced by another wave of maniacs. Many supposed peoples in history were cultural and material not genetic. People adopted anglo saxon culture in Europe to participate in trade and get away from crumbling post roman culture. Celts were all over Europe and many supposed borders between people got pretty fuzzy. They had more in common with ornaments on metal work than DNA. Romans were far more multicultural than we think of them from older films and books. A few people have been outraged by portrayals of multi ethic romans in modern media and real scholars have smacked them down.

Ive had people tell me this is all too hard and a attack on the genre we should give up this crying about fantasy eugenics because it is too hard and we don't want to give up the genre so accept it warts and all. Michael Moorcock did try and and it shows you can subvert these tropes. Erekose is one of my favourite eternal champions. Using Melnibonians as a metaphor for the British empire was interesting. Interestingly enough victorian race scientists included Semitic people with Caucasians because they wanted to be related to the old testament master race and even made myths of lost tribes of Israel come to England, "the New Jerusalem" (patriotic songs about this). Modern racists now seem determined to separate Semites and Caucasians and separate the brown peoples. It always has been pretty much bullshit and you can do better in your games. In my psychon setting there are no "yellow" or "brown" or "black" or "white" races as we know them. Why not have more blue and green people? I'm fine with spells to permanently change skin colour and sexual characteristics voluntarily. Girdles of femininity/maculinity a cheap cursed object? Really? Nobody would want one? Imagine a marriage ceremony where both had to wear them for a year. I could sell a dozen of them in a hour.

I knew a Dutch-Indonesian-Aboriginal family. Same parents with both boys blond and blue eyes and girls quite asian. Wow did they all have a go at any racist strangers commenting on their backgrounds and they all got teary eyed when i played the didgeridoo to them. Or people telling an Aboriginal that they are too good looking to be Aboriginal and assuming they are asian. I certainly have had strangers think I am not white enough all my life because I'm part Estonian and have epidermal folds and my surname. Most people don't notice this. White racists tend to notice this more like the half all assaults I've had all my life from strangers did not believe I was cracker enough for them. Chinese ppl thinking I'm central Asian or part Chinese never came across as being jerks or held it against me. I learned to dislike racists probably from self interest by age 5.

Planar bloodlines or "taint" i have less of a issue with. They could modify any species the same. Mutants too could be of any species.

I think just being mindful of this stuff helps and if your writing game books think about how your half-born cliches would come across to a kid reading it who has to deal with racist cliches. You could do it well or do it badly or come up with something more imaginative and new.

Back to kids briefly. Do you wanna see what makes similar kids cry with happiness instead? Being included as humans who count. We once got a range of "flesh" coloured paint that was not pink but had a variety of shades of human skin colour and kids cried. They never thought they would see this or be considered normal enough for anyone to bother with including them as human beings. It is amazing what being thoughtful and making effort can do.
Posted by Konsumterra at Saturday, July 13, 2019