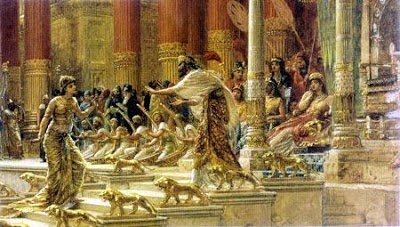 My last for the year of this game

So in palace of king of Umma party decided to check out city of Kartulu to see if deserved the wicked rep it had as a sinking mess falling to corruption with unwholesome citizens. Spoke to agent of king in common clothes who advised dont explore city alone. Also they dont really grow enough food but do well in fish and have plenty of gold. They seem to bribe away Gutians and Elamites from invading them. They have funny version of Dagon more fishy and draconic and possibly far older than the Dagon cult of the north. The source of the gold was a mystery neighboring areas disliked them greatly. Many persons had vanished in city and area.

Went to docks where there was a warf used by men of Kartulu and a street adjacent where trade houses, warehouses, fish markets, a pub and brothel. Known as Fish street it was a dirty street of shifty men in loin cloths with a few poor merchants and shopkeepers. There was a house of Dagon which acted as a embassy and shrine for visitors from Kartulu. Went to brothel first and were unimpressed to see ugly people having sex in courtyard for few fish. Next to the pub where they drank beer from pots through a straw then got to drinking palm wine. Ariana was a former pirate and she got very drunk. Toth talked to a few men and heard the feast of Dagon was in city and men longed to return before the nigh festival began. Party intrigued so all took a hired boat to the city of Kartulu. Left non essential followers and money in palace of Umma. As swampy a chariot trip seemed unwise. Thi richest in party (Ariana, Toth, and now Kull) too the VIP trip with fans, food and more wine. The cheapest barbarians (Sobek, Pek and Kull's backward brother) took the working mans ticket and helped to row.

Boat arrived in 4 hours and captain took them to a good inn. The dykes were leaking, the fields were in array, the common folk ugly and hunched. Sighs of bad kingship or some curse. The festival folk were all buying masks with fish and frogs and eels being popular. Toth bought a panther in honour of Nergal. Rest got frogs and got robes. Kull wore his Marduk dragon warrior uniform and refused to dress down or leave his huge axe.

Ariana was a bit hungover from morning so accepted drinks from strangers who liked her breasts so she got very drunk. As festivities continued floats of fish monsters, dragons, sea serpents and kraken flowed though the crowds. Every one was banging drums, using whistles and rattling cistrums. Pek got a drum. Shift men kept trying to lure Ariana from group but saw she was under watch. Toth saw a really realistic fish man mask in crowd that unsettled him. Kull pretended to hang back and was invited into one of dozens of guild halls for extra drinking and feasting. Saw a ox get dragged in screaming into one and it was rapidly silenced. Pek kept being friendly but insisted his friends come in. They said was too busy and told him to wait. He was outraged at others getting in first. Finally invited in but he would not put down axe so got kicked out. Town was now quiet and rest of party admitted and Pek politely put down his maul as requested. Saw a dragon outfit with leggs of four men playfully snapping at other revelers. Four other in corner chanting in croaking voices with gold tipped warped looking spears in robes and masks. The cultists bolted door and Pek asked why?

"Oh to keep out drunks", they replied

"I am the octopus queen", shouted Ariana drunkenly

Finally the chanting increased. The robed men revealed their true faces of deep one fish men. The dragon dancers turned into a real wingless dragon, possessed by a liogor spirit forming flesh from magic power of the city rituals. But the party were not afraid and drew their hidden weapons while kicking and punching at cultists. Pek ran to his maul, his guardian spirit of Ninurta told him to be wary of the dragon spirit. Kull out side heard commotion and his spirit grew angry. Ariana called a lightning bolt from heavens through roof and struck the dragon upsetting it.

Our heroes cut and bashed the men senseless but the fish men sat back sending evil eyes, even demoralizing Pek. Pek's spirit countered the spells and Pek returned more violent than ever. As minions fell with ease the dragon and fish men edged closer but Kull smashed door down with axe and cast the command dragon spell of Marduk. The  liogor discorporated it's vulnerable fleshy form and angrily cast spells at Kull but his guardian spirit warded him from spells.

With no dragon the fish men were batterd. The dragon tried to reform and kull banished it again wasting the Dragons prescious magic so it fled in spirit form to alert other dragons and deep ones. Party killed deep ones and took one cultist captive and fled for docks. Ariana said she had never fought so well and should get drunk in battle more. They ran with a mob behind them and Pek dropped out to claim the party goods. At docks most held of crowd while drunken Ariana selected a fast boat. All jumped in and set off rowing hard. Burbling deep ones came at them from the water and Ariana shot at them with her bow. As they sailed past walls into swamp, Pek leaped from wall thirty feet up with all party loot. The got to nab some deep one gold medallions and had a cultist prisoner.

Escaped back to Umma and celebrated victory. Learned much from cultist about the fowl city and relation to the lords of the deep and other horrors.

Was a lot of fun as all players knew what they were facing, the Insmouth of 1751 BC

Posted by Konsumterra at Tuesday, December 16, 2014