Gamma Raiders of the Beaver King 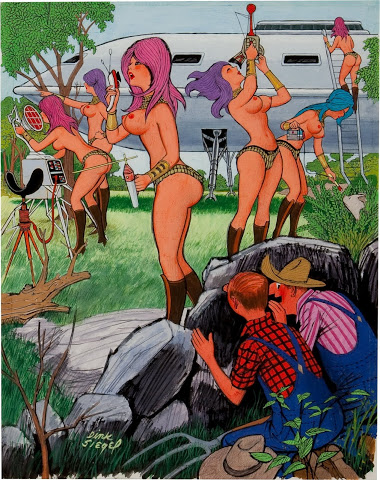 Two new players at Urchin books gamma aeon game. I had a debate about editions with a passer by which was funny. My preference for Basic edition was a surprise. Original players getting into having back up characters ready and realize they are a bit weak.

Cujo (Rachael)
A mutant dog, fully humanoid with poison fangs. From a steam punk tech pack in a death land area. Swapped tent and bedroll for a replica sabre. Has a sack of clock parts and is a cogsman wandering tinker. Very good survivor and mechanic. Got given a machine pistol by the party. Got a riding turkey with shooting beard spines (warned not to surprise).

Dave Stark (Sam)
A genetically modified pure human on the run from a radiation poisoned bunker. Operated at cyberpunk level tech and Knights of genetically purity warband. Got a bolt action rifle with a bayonet. Has a cyber hacker deck in an armored case. Fairly tough but a bit wimpy for a super soldier racial supremest. Has a bunch of high tech camping supplies typical of soft advanced types. Riding turkey with radiation eyes, blue wattles and neon green feathers. Dave has not mentioned his home land other than as a radiation hazard. His kin may hunt him if they hear of his location.

Kong (Mark)
He is Johnny's flunky and an unstable mutant with an impressive array of mutations. Carries a mostly for show blunderbuss and sabre. He comes from a Napoleonic tech family of mutants whose looks and faces change monthly. He has been living as a superhero crusader in his semi ruined hometown. He is earless with multicoloured skin with long arms and short legs, or he does this session. Probably has some old grudges with a mad scientist or mutant. Riding turkey with fire breath, red wattles and neon orange feathers.

Johnny 1111 (Mark)
From Bunker weakling to wasteland warrior - his Gamma Eyes zap the best foe out in most battles. Happy with his B-type Slug gun he is the best scavenger. More mutations have made him better. Extra shot skill and his mutations make shooting lots with basic pistol a menace. Still looks human under his sunnies. 2-pistol style would be deadly and economical improvement. Riding turkey covered in  purple wattles all over and no feathers.

Deathport 0002 (Matt)
The bat winged wonder chef with grenades, a las pistol, a sonic blaster, plus some dynamite make him a heavy hitter. He has some weird hi tech skills like teleporter ops and ray gun know how. He has become a Mormon and has two young recruits and a riding turkey with hilarity poison yummy meat. His flunkies carry stuff and watch the riding turkeys when the party is inside. The secret cyborg controller has his photo.

Fishtank 2414 (Carolina)
Discovering being a pyro is difficult indoors didn't use flame thrower or moltovs once. Currently in her porcupine form and has lived for 3 months as such even hanging with other porcupine. Using her axe, shield and electric quills. On lookout for better body to copy. The last one she copied has a grudge. Has become mutation expert from cult. Turkey with Gamma eye (dont spook him) with blck wattle and feathers.

The party meet in the stable behind the pub because Kong has anti charisma today. With donated turkeys and some new flunkies they follow a tip and look for bunkers exposed in the recent spring storms. A beaver paddler pointed out some concrete exposed and they found 10 bunkers.

Mostly ruined they killed a giant ripper bug, traded with some slither snake folk badly, killed a fungus bat Ob and some weird screaming irradiated undead and a zombie. They met some rednecks who traded moonshine for cigarettes, a cowardly psionic mutant and a sick family needing medical help. Undead deathfeilds hit multiple players making fishtank and Cujo retreat - Johnny fried but peeked around corner and zapped a screamer.

Some odd loot - some high tech cube and sphere that defied identification and looked cool. A slug thrower, revolver and fusion rifle with no atomic cells, gifted a neural whip by the rescued family - pleasure, pain and stun settings (all same effect). The cowardly mutant gave them 2 frag grenades.

Lots of trash like vip clothes, doughnut maker, some helmets, power bbq, video discs, e-car engine time test kit, a commerce transaction laptop deck and lots of other crap. The cube was a map box that projected interactive holo maps. The sphere was a game but it looks cool enough to sell as anything. They traded for some ammo and chain-mail and read a data chip about an investigator searching for a black lab among the island bunkers. Possibly linked to growing cyborg membership with gangs and pirates. A pile of bug eggs made good eating and were swapped for bears. Too deadly to try and hatch.

Im actually running here original legion of gold - one of best modules from oldschool era by gygax. The screaming undead fit with my undead in setting fine. Some bigger bunkers next session with possible steam traction engine 20mm gun car. Need them ready to kill buggems and androids and seek to loan an e-car from the barony of horn. Cyborgs will be enemies in short term - allied with space-dwellers. Id like them to make an attack on a proper bunker like their home one or something and go over kill before their moon trek.

I was nice enough to not kill some newbs the first room they entered - growing an extra brain is a bit more fun. Soon players will discover the more mutations you have the more hideous table you get to roll on. Which means ill do my mutation tables for chimera then abominations. Ive considered adding plant based humanoid as a 1 in 6 option for plants - pod people with less mutations but hands and voice box and can pass for a mutant at least. After seeing cyborgs in mutant epoch i like idea of cyborging table. A table for undead powers might make that whole line more interesting. Animal breed table might be handy.

Carolina did a great animen - goose woman with a diesel blimp that will make a great plot hook and way to get around the great lakes. Bred to be high altitude endurance pilot. Matt has a pc from a clan of time traveling mutant lemurs busy breeding powers into their bloodline by temporal incest. All very strange.

Posted by Konsumterra at Sunday, December 02, 2012