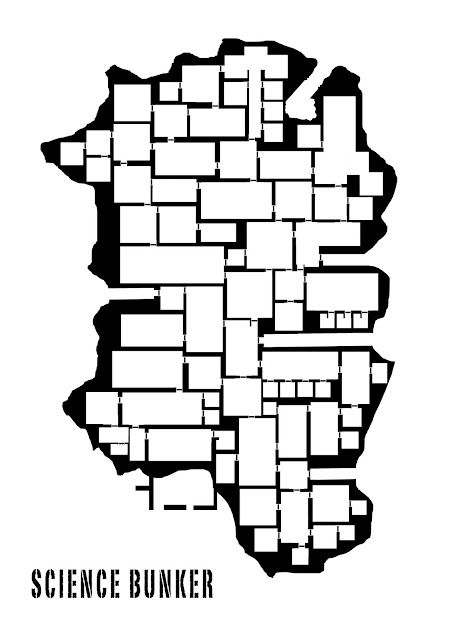 A map  i made while feeling ill at work.

It is a hidden black lab disguised as a eroded hillock with an abandoned shack on bottom SW.

The tunnel mouths look like caves till the steel door or in one case just a the lair of a huge beast. Area wired and camera system in place. Monsters from bio labs can be released if intruders get close.

I guess it could be a dwarvern hidden citadel too.

Anyway on with my plans for Gamaworld based on modules i havent touched since i sold them to david conyers in about 85 when i introduced him to cthulhu. Plus some dragon articles.

So the party has orders to stock up and muscle up for for more serious adventures. Rooting out the cyborgs masters and investigate the threat of the space born sacks of flesh in armour that were human when the left sol 300 years ago. Space travel one big goal of the Beaver kings plan too.

So currently playing mish-mash of legion of gold. Some local bugs to fight in a bunker (buggems) before some important diplomacy. Players will get to work with Barony of horn against the cyborgs. All in hope to borrow Barron of Horns e-car. A few diversions like An android installation before hunting the Cyborg command bunker. They need more atomic energy cells too.

I am expecting this to either lead to Albuquerque space port or go direct to Tycho station - a hell hole of macrobes and mutant plants battling for supremacy and perhaps new mutagens. I will use space 1999 moonbase alpha as it is pretty much the best darned moonbase ever. Their are orbitals still intact and some asteroid/moon habs out there. There is the Wardens sister ship still in lunar orbit used by navigators and gamma astrologers. It has gone feral in part like the comic Morbis Gravis (A great comic in heavy metal but writer more into kinky sexual weirdness than resolving the world). The ship is sick and has isolated itself into zones by how infected. Biological and material all warped and deformed. Rust covered slime filled tunnels filled with abomination mutants. Other sections have degraded but are intact due to a priesthood who control the masses with anti-mutagens. The priests serve the computer, some are undead cyborgs. Gangs control illicit drugs gained illegally and run vice. Explorers seek stuff and a miracle to save the ship before being mutated or killed.

Then probably do some DnD again. Need to play test some stuff. Australia will be my next gamma game location. Several time traveling PCs have made me consider i need to do a more detailed gamma history. Which could also make interesting planet of the apes paradox time stream game.