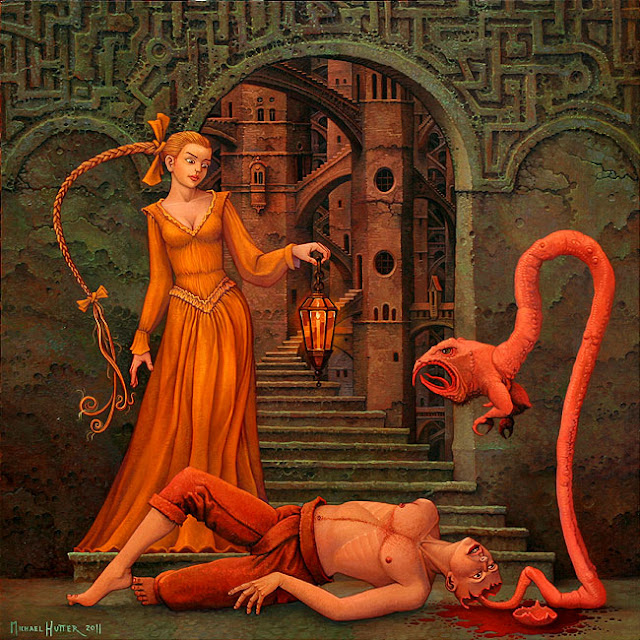 Elves who live under the will of their version of the elf queen and king are safe and able to breed true elves. By entering sacred marriage ceremony their love is dedicated to their clan ancestral monarchs . For elves outside elf land and exiled from the loving grace of royal masters they return to the magical breeders of life that populated the world in the late dawn age. Some clans relish the curse and tribe may have one version only curse for whole tribe. This will change the nature of elf clans quite a bit. Some devout human elf cultists might mate with elves deliberately for strange elf blessing.

Goblins are related to shrubs, vines, fungus, lichen, algae, ferns, succulents like cacti and any smallish plants. Bigger goblinoids evolve from goblins. Elves often employ them but they often run wild. Elves will plant goblin and even orcs between their lands and human kingdoms. Bright sylvan or dark fungal versions of goblinoids are quite different to the typical wild goblins who mutate and create sub breeds in a few generations in a environment. Bright ones tend to be ivory fair or green vegetal skin. Dark ones are black, grey or violet skin. Wild goblins often brightly coloured even piebald.

Back in the Dawn Age elves were made to help the gods and spirits that operated nature. They in turn made many other breeds that are common today. Immortal elves find pregnancy a ordeal but often perform it out of social duty. The cursed elves reproduce lots of strange children to create a viable elf which they consider mothers heroic. Many elves are lascivious and quite carnal. The males happily mating with humans for a lark then run away. Only a desperate Elf maid would mate deliberately to reproduce with a human but many may tease or experiment on humans.

Elves are the first humanoid race to reign on behalf of the gods. They created most animals and many monsters. They created goblinoids to do their dirty work and orcs were made by dark gods to destroy elves from elves own dead. Humans appeared at the fall of the Dawn age and the start of the monster age when tyrant beast men entered a unholy covenant to rule. More men were created from beast men and lived still as beasts, the barbarians and wild men. When man revolted many monsters and other races were  destroyed in revenge. Many creatures and races hid themselves or sealed themselves into dungeons.

This table is to be rolled when only one parent is elf or parents are both elfish cursed outlanders.  Elves fallen to chaos more likley to use it too. It could be used for sylvan transformations.

This is increasingly sounding like a Japanese comic but it is only for elves
Posted by Konsumterra at Monday, December 26, 2016