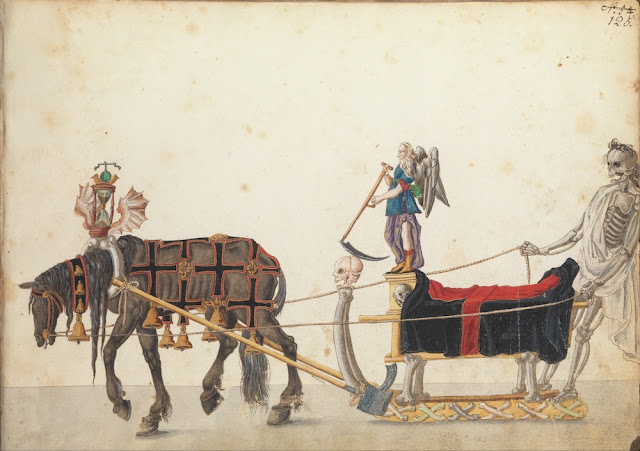 Most of my recent research based on medieval art and texts
http://medieval.tumblr.com/
Some nice medieval clip art - odd but small

Some ideas on devils and demons Ive had is to almost build like a character class. Starting with zero level imp with a d4 hp then progressing in HD or levels and getting extra abilities. Most have wings and tails and basic resistance to normal weapons. Cold iron hurts demons, silver harms devils. Higher creatures gain extra resistance vs weapons and specific attacks or magic. They also get more powers, implements and skills. A basic devil gets several claw attacks or uses a pitchfork or crude spear or pole arm but mostly peasant tools. Quality of weapons and more natural attacks increase as they get stronger and more HD. Senior devils Weapon are more likely to be made of silver or cold iron and magic for greater still. More monsters of hell use spell like powers per day and might use others magic items.

Apocalypse devils are skeletal looking devils with far greater range of mischief and torture dreams than a plain skeleton. Very few have wings or tails or use unarmed attacks like claws.  They are sadistic tormentors with senses of humour. They keenly act out the torments on he damned they once received . They enjoy their work and enjoy ironic or imaginative torment. Mostly laugh and scream but often silent when serious. More like Mars Attacks than Predator for a modern movie analogy. Spears, tridents, clubs and occasional agricultural flails are their main weapons. They often act in unison and may be seen letting loose in dance and revelry. Without a leader and numerical advantage they lose confidence rapidly.

Leaders are cool, grim and merciless.  They prefer to capture and entertainingly execute victims than let them just die. Greater ones use weapons of knights or executioners or twin sickle style or scythes. Flails and maces are popular too especially from those who were once clergy. Powers include animating dead, stinking cloud, death gaze, or banshee howl, Some also have strengths and weaknesses of undead. Greatest can summon the dead, call walls of bone, ride skeletal horses or chariots, Some can grow huge or heal harm by adding bones to selves or by eating them. More powerful ones more likely to speak sensibly or act as character classes do.

Uncommon variants include forms of other undead even non corporeal ones. Only some have have wings, mostly skeletal bat ones, possibly with magical invisible membrane. Some with bird wings in white, grey or black. Tails and horns might appear on some or bestial heads. Tails like scorpions allow them extra attacks instead of claws or wing slaps. Some wear clothes mocking the stations of mortals with devil nobility dressing as knights or bishops. Skeletal demons more likely to exhibit mixed species, fused to weapons, deformities and be individuals. Flayed skin variety have visible muscles and are a bit more haughty.

Possibly when actual undead die the devils and demons and spirits n them can be seen departing when in hellor with supernatural vision. Could be in form of smoke or imp or swarm of bugs. Possibly he corpses look less horrible after the unclean animating entities flee.

Hellmouths can form on any surface - a giant devil face with teeth and scaly coloured skin. They are living gateways around hell. Mostly they exit another hellmouth but sometimes (1in6) they come out the other sort of exit farting flames and stinking clouds. You could adventure inside a diant devils digestive tract. Possibly the gates could be spoken to or controlled by some duke of hell. The mouths could be bribed with some promise or a body part or a sacrifice. They might lie - not a blatent one more like a trick word bending lawyer,

Hazards can be avoided by wits or going around them or fighting through. The point is they can be avoided and often threat is visible a long way off. Encounters proactively pursue you to attack.

Some good questions:
What if i die in hell?
More stuff on damned?
Posted by Konsumterra at Tuesday, March 15, 2016