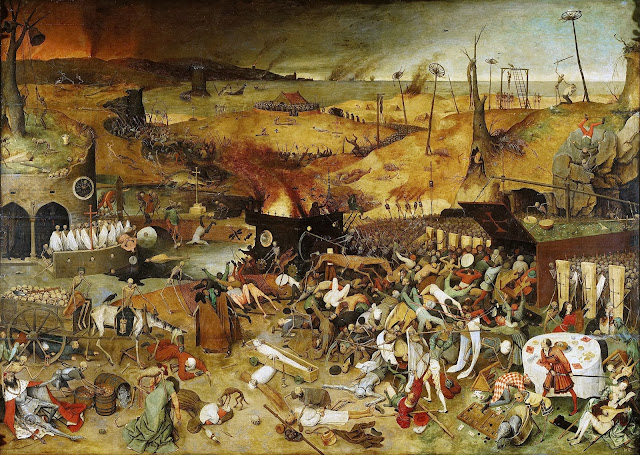 I had been wanting to do this and this dude beat me to it cold
http://wizardthieffighter.blogspot.com.au/2016/03/d57-table-plague-stalks-these-lands.html

Plague based apocalypse is something I like allot (Dragon did a good article on this 70-120 ish). I read a UK children's book about kid finding remains of plague abandoned village in forest. I guess here is lots of great UK kids horror fiction drawing on history and supernatural. Many often not much happens but suspense is built well with a supernatural pow at the end before normalcy is returned and kids holiday is over.

So idea of post plague apocalypse buried among woods has been in my campaign as the bone forest for a while, A whole country wiped out by plague then rapidly grown over by the forest (yes elves did it). Now full of haunted houses, graves, monster trees, ogres, and notably the bone elves and the bone goblins. They don't fit into either bright or dark elves and those elves are not even sure if bone elves exist. One party met underland elves that seemed related to the bone elves. It's still a mystery.

I have several posts in the wings for a break - something on witches and something on horrible new elves. d100 magic animals I might have to restart to be more like my d100 petty undead. Some more gothic NPC types like my hermits. I'm also trying to kill some of my old projects sitting in my draft box like mutant class with mutations arranged in levels and other half of my robot spells.

Currently I'm working on a new collab project with Alasdair Cunningham - a literary/art inspired hell pointcrawl sandbox setting/adventure. Which could be run so randomly you could play it again and again, possibly solo and on the fly with equally unsure as to outcome experience for the DM. Possibly a huge project. In some ways like my Dungeon Zones.

So anyway Plague Lands is a terrain type for hells base on the above painting and medieval art subject. It is of course panel painting by Pieter Bruegel the Elder painted c. 1562 probably best fantasy artist ever. It is a constant parade of death and horror.

Encounters, Wonders and Hazards tables for each terrain will provide events and a kind of portrait of the lands character. The hell is a pocket dimension unrelated to other hells, it's overlords unrelated to outside entities. The world is a series of lands destroyed by apocalypse and trapped in eternal torment.

Devils serve the authority of hell and belong to strict types and hierarchies. They don't have to like job but they act with certainty that they act with righteousness. Their victims deserve torment. Demons are more individuals, acting as bandits, criminals, exiles, freaks, mercenaries and freelance sadists. Devils will claim authority of heaven to torment, Demons you just don't know, they don't need a reason to be jerks.

I will probably stat up a generic devil and demon that can be of any HD and can be reskinned for every type of hell. It is important to not this spiralling pit hell is not connected to or part of the outer plains and entities with same names can exist in outer plains. The devils and demons here are independent and even in denial of outer world. Thy are prisoners also and only special cases or missions are sent out and they generally don't go far. A few generic beasts like cats, dogs and horses will be handy with custom hell type features to create local types.

The people in hell are mostly evil or at least did evil things. Even those trapped here have been led into wickedness such as cowardice, fighting over scraps of food, killing others to get to safetey and other damning actions. They either join the legions of dead or become demons or devils or are reborn as human or worse. You don't need to help the damned but making their lot worse might just earn your place with them. If rescued they generally go own way or worse hang around and demonstrate greed, cruelty, betrayal, lust etc.

In the plague lands there are undead aplenty but many demons have undead forms and may look skeletal. They may also have wings, scorpion tails and tools or hats that give them away. Many undead are after all have a form of demon or devil as the motivating force and is also why making undead lets evil into the world.

The plague lands are more home to undead than standard demons or devils, although mindless skeletons may be directed by skeletal devils. In some ways death is more neutral than evil but in Hell the gloves are off for mortals. Plague lands are just not wastelands of death. The breakdown of order from plague and death means without workers there is famine, with finite resources comes war.

Each Type of Hell will have four kinds of events

Hazards an Encounters and a bit about skeletal and undead looking devils and demons
Posted by Konsumterra at Thursday, March 10, 2016