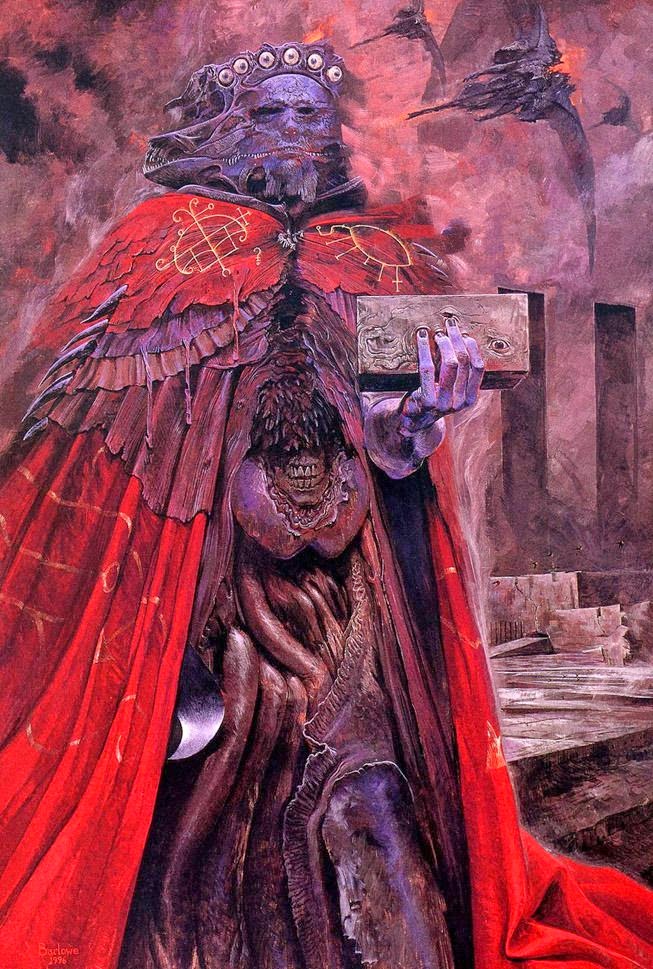 So the team returned with the tentacled Tako sorcerer and his guard Jimmy the eelman bounty hunter, the young giant skull crusher and Nahme the Angel with just her bugbear hitman, her thief boy and her junior priest.

Plowed in heading for the throne area as indicated by hobgoblin captives. As the burst through the guards responded swarming them. The cleaned out a room and held it with hobgoblins from two fronts. Giant smushed more through one door and pulled back letting the Tako riding him like a disgusting slimy hat fireballed the room. Which was handy as hobgoblins were now attacking rear. Hobgoblins kept pulling away to let archers attack but party well defended by spells.

They pushed deeper into palace area and killed more before cornering the chief who was occupying the former goblin kings throne.

They burst in only to have several party members paralysed blocking most of them in corridor. The giant waded in towards leaders who had two trolls, a priest and elite bodyguards.

A few fire balls went off in a long battle before the paralysed party members were free and joined in. The trolls were a bit frightening and needed to be killed and burned as only fire stopped them healing. As they picked the corpses they heard laughing and a crack as a demon appeared which Nahme banished. Sacked the monsters treasure and sent for kobold allies who swarmed the level and secured it. Helped to trap the orc level and returned to camp.

The giant lad gorged himself of the dead and grew inches overnight. Others wrestled with new spells. Outside dungeon a shanty town of murder hobos had made camp and a priest had come to set up a mobile shrine intending to reclaim the dungeon in the name of the imperial church. A strange priest of chaos offered to join them. Was clearly deranged but keen to kill.

According to information from kobold, goblin and hobgoblin converts the next level was the hobgoblin king, a more civilized chap with better trained troops. Above that were wizard made orc guards then a ogre level where ogres tended some evil artifact the wizards planned to wipe out the world.

So with the priest they broke down the barricades and killed a mass of guards. Floor plan was very restrictive but they faced 80 hobgoblins, half archers. A fireball destroyed the barricade and 30 spearmen. As heroes plowed into archers most fled. Heroes came after and retreating hobgoblins fired and heroes killed more till only 12 left who split in two directions. Chaos priest animated dead as zombies. He got them to search suspicious urns. From one direction heard women and clanking pots so they went that way. Chaos priest left saying was time to inflict chaos elsewhere.

Came in and killed them and while searching the kitchen anf giant examining cooking gear and sampling the roast kobold on a spit six trolls came in from the kings guard with six archers behind cheering them on. The trolls got the drop on them inflicting terrible wounds and dropping several heroes flunkies. Managed to fell one who began to regenerate and the Tako hurled fire shuriken enabling several mor o be weakened. Finaly when battle in position he fireballed killing several and injuring rest. Able trolls and archers all ran and the giant chased them. The others kept the wounded down fith fire and threw them in the spitroast fire pit to finish them. Giant managed to get ahead orf trolls and block them and finish a troll and battled the last one. Archers shot him in back and party caught up to finish off the trolls by beating to mush then searing them with petty spells.

Came into foyer and hobgoblins sent out a messenger. The wanted to be allowed to leave dungeon. Negotiated half there loot and watched the last 30 warriors and leaders with a hundred women and children and old. Some muttered we should kill them but Nahme insisted keep to deal. They would probably beat up some goblins and take over some other dungeon. They would never work with wizards again.

Finaly came to stairs to the above, sealed with a fresh stone wall.
Posted by Konsumterra at Monday, March 02, 2015