RQ6 Bundle of holding and my BRP Stuff 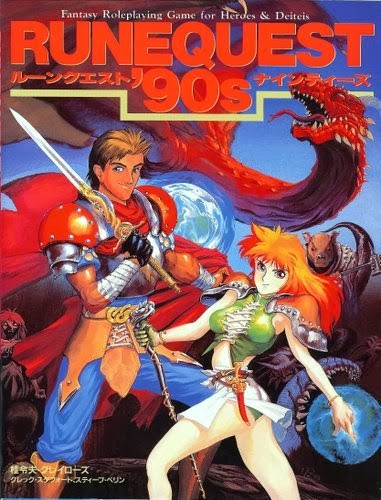 looking at RQ6 pack i got now - my edition is RQ1 and the Avalon Hill edition which started mid 80s then flowered in early 90s then folded. Most stuff was slick looking and i had every product. The much hated and some say worst gamer product ever - i found a favorite every game used book for pregens for most occasions. Also lots of ideas for custom monsters and Broo gangs and how magic used by NPCs. At start i only used divine. Then got spirit magic and became a expert player with it then a scientist from the group got sorcery and explained it to rest of us. Wasn't till I saw those 90s sourcebooks I saw more awesome abuses of sorcery.

Through 90s I ran 3 Babylonian games for several years, multiple of my own worlds, some Gloranthan classics (about a third of scenarios i own), some dark ages. BRP Ringworld based game from 80s into 90s (and im kinda re starting with a DnD based system).

RQ6 looks pretty good - tasteful and well layed out. A few things have which possibly why dropped Mongoose RQ and stuck to the old. I think will have to do my own BRP character sheet for games I am running. My edition use dark age europe or glorantha which is a great world - new setting and adventures not as cool as old stuff which is mind blowing weird (Ralzekark of Dorastor, Griffon Island/Mountain). Looking at this I am motivated to get moving on my version on it.

There is also Legend from mongoose which has art that is well done but i find kinda the wrong feel - non gritty history and a bit too sexy for its own good. Marked decline and so called rq2 line seemed all rushed.

I like osprey military books more than most game art for RQ as it is so gritty. Open quest is another alt versions that all have heir strengths - simpler than I want but might have some ideas and gems inside. One called magic world which Im tempted by but a few things bugged me (Typos which a dyslexic like me can see flipping in a store and I have all old games art and most of rules ripped from). BRP (basic role playing system) has many versions including Cthulhu.

Wacky variable armour seems more appealing now but i will think about
detailed hits or damage threshold score and crit tables?
I might go a bit more light stormbringer flavour for my setting and go gritty for historic babylon
I could use more heroic simple system for mythic age of early Sumeria and add complexity as I work through eras - Akkad - Babylon - Assyria?

I have hopefully got a source for Worlds of Wonder - Chaosiums universal system with a basic character book and a mix of super world fantasy world and space world genre books.

I'm tempted by:
no fatigue points
no strike ranks but multiple actions doesn't offend me but might be too horribly complex - id rather have sword master can split attack
Skill attribute bonuses more like ringworld less like avalon hill version
Weapon group thing going now is too easy - but Ringworld type groups could be interesting
And old school pole arm damages please (id rather a naginata than a katana)
I used a deck of cards as a booster system but using playing cards - starting gifts and in-session ones
stun and lethal damage types like gangbusters and top secret/SI
Recoil rules for guns instead of shots per round - I love BRP automatic fire
1 second combat rounds
a stat derived movement score

My BRP Cyberpunk game (99% lite on corporate missions where you get betrayed every game)
Id like to run 1st edition Stormbringer Game some time to make modern kids respect oldschool evil. Elric would so swat Cthulhu with his soul draining sword.

Babylon BRP Game to work on later this year. And I could easily do some of my own setting
Cthulhu Vikings Will get first treatment and i should crack shortly

My SF game pretty awesome - I could do various eras but I chose to run my Spaceships & Spacemen inspired version of my DnD which I am testing now and suits current needs for rules.

But that Japanese Edition of RQ looks amazing

If your new to RQ this is a good time to try it as is a classic and my prejudice comes from 30 years of enjoyment. Just go buy it. I promise to read all thoughroughly

This is edition I was a player in the most.
Posted by Konsumterra at Friday, February 07, 2014